Carl Grimes is a fictional character from the comic book series The Walking Dead and is portrayed by Chandler Riggs in the AMC television series of the same name.

In more ways then one Carl is the "John Connor" of the series, the human guinea pig that we're watching be moulded by the zombie apocalypse more so then any other character. He's not just a character; he's a statement about how this world changes what it means to be human when your morals and views were not developed like the adults were before things went to shit.[1]

At the beginning of the series Carl lives with his mother Lori at the Atlanta quarry camp. Rick reunites with his family at the camp. At the beginning of Season 2 Carl is accidentally shot, he is taken to Herschel Greene's farm. Herschel operates and Carl recovers. After they leave the farm Carl helps the group clear the prison for habitation. Lori dies during childbirth and Carl must put her down to prevent her from becoming a walker. After the prison falls Carl, Rick and Michonne travel together, they are taken by the Claimers who insinuate that they are going to rape Carl. Rick kills their leader Joe and the other members of the group. At Terminus they are captured by a group of Cannibals. With the help of Carol the group escapes Terminus. The group is accepted into the community of Alexandria, when it is overrun by a herd of walkers Carl is shot in the eye, by Ron Anderson who blames Rick for the loss of his family. After Negan kills Glenn and Abraham becoming overlord of the group Carl goes on a mission to kill Negan, but is unsuccessful. At the beginning of Season 8 Carl is left to defend Alexandria as All Out War begins. Carl dies in Season 8 after getting bit by a walker. 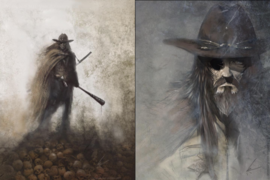