From Fanlore
(Redirected from Beta read)
Jump to: navigation, search

You may be looking for the trope Alpha/Beta/Omega.

A beta is the fannish term for a fan who looks over fanworks for errors or places they could be improved before the creator posts the fanwork for public consumption. "Beta" is both a noun ("a beta") and a verb ("to beta"). This leads to the awkward but necessary constructs, "betaed", "betaing", and the antonym (for a fanwork unchecked by anyone else), "unbetaed".

The word "beta" comes from the world of software design, in which an unfinished version of the software (the beta version) is released to a limited audience outside of the programming team. The metaphor was applied to fanfiction, fanart[1] and vids; a story, piece of art or vid is tested by outsiders to see if it's working.

The fannish use of the term may begin in the anime community in 1995. It was also used fannishly around September or October of 1995 in the Sliders fan fiction community on alt.tv.sliders. [2]

The word "beta" is pronounced differently in American and British English.[3]

Some British fans have started to use the American pronunciation when referring to fanfic betas.[citation needed]

Scope, Process, and Distribution of Work

The betaing process tends to happen, strictly speaking, before a fanwork is completed or posted, unlike concrit and other feedback that comes after publication. Betaing also usually happens privately or at least in an informal setting, often but not always one-on-one.

Beta services can range from simple proofreading and compatibility testing to editorial feedback to nearly collaborating with the original creator on the fanwork. To avoid conflict, creators often explain what they want from the experience — for example, an artist might only want feedback about colors and shading, or a writer who's seeking feedback on a rough draft might ask their beta not to do any sentence level betaing.

Many creators will have a usual beta or betas, especially if they've been creating in the same fandom for a long time, and it's common for fans who are friends to be each other's betas.

There has been much discussion in fandom about the differences between betas and editors.

This writer appears to be asking for something closer to a beta. From the Robin of Sherwood letterzine Cousins in 1992: "I would love to swap stories with other writers just to get feedback on 'does this story work, or is it full of stupid mistakes.' So if there are any of you who would like to get into critiquing or mutual 'workshopping,' let me know. After all, once the story is written, it sits around for months until it finally comes out in a zine. So why not use that time to make the story as perfect as you can get it?"

Before the internet, when most fiction and fanart was in zines, it was the editor who worked with the writer, often quite intensively, to ensure that a fanwork was a good as it could be before it was committed to paper. As fiction moved to the screen and away from zines, there was much complaint about how fanworks declined in quality:

Some people say there is no difference between beta and edit, that it is simply a difference in terminology.

Creators may provide their beta with a copy of their work to review and beta in a number of ways.

Creators attach their fanworks to an email and the beta emails back with their comments either in an email or directly added to the file.

If the instant messaging program allows (for example, on Discord or Skype) creators attach their work to an IM, and then have the beta send their comments back on the file. However, IMs also allow for quick, informal conversation, so the creator and beta may discuss the work in detail via IM, especially if the beta is providing larger-scale edits on plot, characterization, or structure. The work may also be hosting somewhere private and linked to the beta rather than uploaded directly.

Betaing in group chats and Discord servers may also be a group activity, where one creator uploads or links their work and the other fans in the chat beta it as a group.

Google Docs and Other Private Hosting

Google docs are frequently used for betaing because edits to them can be watched in real-time and using them requires no file downloading. Additionally, several people can edit the same document at once, which can make the betaing process much easier for creators who have multiple betas, as they don't have to merge several documents or wait for a file to be emailed around.

Other private or unpublicized hosting venues include:

In fanfiction, a beta, or "beta reader," is someone who looks over a story before the author posts it publicly, checking it for some combination of spelling, grammar, cohesiveness, flow, plot holes, characterization, etc. The lightest form of beta-reading (betaing) is basically a quick check for spelling and grammar errors. From there, the beta process may run through a full spectrum of editorial assistance, all the way up to helping restructure a story or suggesting major rewrites.[5] (There's a pre-beta level that consists mainly of cheerleading, as well. This is sometimes referred to as "alpha," but the term has not been widely adopted.) A more critical approach to editing is referred to by some as Machete Beta. 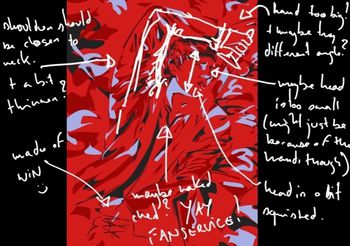 fanart beta by xenakis for an image by Yue KX, art is for the Merlin story On the Knob Training

Like fanfiction and other fanworks, betaing for artwork happens while the piece is still in progress, such as at the thumbnail, sketch. or lineart phase. Betas for fanart may simply provide suggestions via text only, describing what they think can be improved, or they may (as you can see to the right) draw directly on top of the art they're betaing.

Common areas fanartists ask for help in include anatomy, color, shading, and perspective.

In vidding, the beta process can range from giving a general impression of a vid (to let the vidder know if the message was communicated successfully), to going through the vid almost frame-by-frame looking for technical issues, to helping restructure the vid or suggesting major changes in approach or clip choice.

It's easy for fanwork creators to make basic mistakes about cultures other than their own. This was a particular problem in Harry Potter fandom, because Americans and others don't know much about British (much less Wizarding) culture. This led, in 2003 or so, to the concept of Brit-pick (rhymes with "nitpick") to deal with issues such as which is the first floor and what "bum" means.

This step of the process is often separate from straight-up betaing, and has its own set of communities and resources.[6]

Some fandoms also maintain lists of resources or betas with special areas of expertise. For instance, in a fandom based on a medical drama, a fan who works in the medical field might volunteer to beta the story for medical plausibility, or in a fandom based on a Western, fans with expertise on horses or guns might make themselves available as a "horse beta" or "gun beta" to review just those aspects of the story for accuracy. (On Senad or maybe Senfic there was such a directory?). On Livejournal, many communities exist for this purpose, some multifandom and others fandom-specific.[9][10][11] There are also non-English beta communities.[12]

In March 2008, Fanfiction.net announced the release of a "beta reader registration and directory lookup service" for the site.[13] The feature made it possible to browse a directory of registered beta readers, organized by fandom, and to review their beta profile, a separate profile containing information on strengths, weaknesses, preferences, etc. Prior to this, and even after the feature was launched, many users would use the Fanfiction.net forums to create threads and communities soliciting a beta reader, or connecting beta readers with authors.[14][15][16]

The Good, the Bad, and the Unbetaed

Media Fandom in particular has a deeply rooted tradition of the idea that all fanfiction must be betaed. Many fic fests, challenges, archives and posting communities make it a requirement of participation. One notable exception is commentfic, which is understood to be written and posted in a more informal manner. But the move of many fans from older, centrally-controlled spaces to user-controlled individual Livejournals or websites has led many fans to more readily break away from this thinking.

Some fans like the experience of writing and posting quickly without waiting for another set of eyes, and they often post unbetaed stories in their own spaces. Many fans often express a willingness and desire to find a beta, or a good beta if they're unhappy with their past experiences, but even in active fandoms, the beta-finding comms are sometimes very dead spaces and finding someone who can beta well, and has the time can be a frustrating process.

Many fans who post a story that has not been betaed will note that in the header, either with a simple statement or with a disclaimer such as, "Not Betaed: All errors are mine and mine alone." [17] Many other fans commonly post unbetaed stories and draw no attention to that fact, and many readers likely never notice.

There are fandoms where self-editing is common and posting unbetaed will rarely raise an eyebrow. This is true in many journal-based RPF fandoms and is especially true for short fiction in those fandoms and in general. For example, a writer who usually posts unbetaed might use one for a big bang story.

Many fans certainly think so. Their allegiance to the idea that a beta is always necessary is often very strong, and they believe that an unbetaed story is inherently more likely to have typos, grammar errors and technical writing mistakes as well as canon errors. Some fans hold fast to the rule that no beta equals an automatic backbutton and consider fans who refuse to use betas to be arrogant or lazy.

In many minds, unbetaed automatically means the story is an unedited first draft. That can certainly be true, and sometimes fans post stories in that manner in order to meet deadlines and then edit later, but many writers self edit and only post what they perceive to be a polished finished product.

While there are many fans who never or rarely use betas, formal meta about why they do what they do is rare. It is often a difficult issue to talk about publicly for fans who are bucking this deeply held cultural tradition.[18] Complaining about bad experiences in the past can often seem like finger-pointing at particular individuals, and drawing attention to your habit of posting unbetaed can draw unwelcome critical scrutiny.

A common refrain on places like fanficrants when complaints are made about problems in stories is, shouldn't the beta have caught that? Which then usually devolves into yet another discussion of the difficulty in finding a beta with attendant horror stories of bad beta experiences from both sides of the process.

In a more serious vein, when stories draw attention for problematic content around race or misogyny or homophobia, often the story's beta comes under scrutiny as well. Even though there is no way to tell how much of a beta's advice a writer made use of, they often bear the criticism for the mistakes in a final posted version.

It is customary to thank the beta in the fanwork header. Here are some examples: