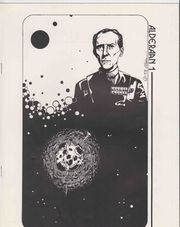 Alderaan 1 was published in February 1978 and is six pages long. It had nine letters.

Alderaan 2 was published in June 1978 and contains 10 pages. 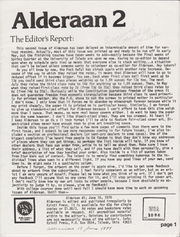 The second issue of an excellent "Star Wars" letter 'zine, this ish features some interesting and informative arguments on the virtues of "Star Wars" vs "Close Encounters of the Third Kind," as well as some clever rebuttals on the subject of the viability of the women featured in SW. There's also a hilarious collection of various lines of dialogue from the movie taken out of context (I'll say!) and a beautiful sketch of Chewbacca done by the editor as the cover. A promising personal comment 'zine.[4] 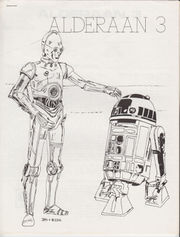 Alderaan 3 was issued in September 1978 and contains 8 pages. This issue is reduced, as the postal rates have gone up. This issue is also the first with the co-editor, Allyson, who volunteered to work with the LoCs. It also contains the first zine reviews. 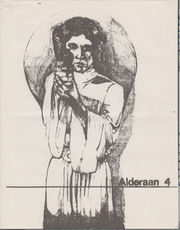 Alderaan 4 was issued in February 1979 and contains 8 pages.