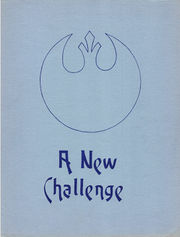 A New Challenge was a 1985 gen Star Wars 222-page novel by Ellen Randolph.

The editor and publisher was Jan Lindner. There were 300 copies printed.

It has art by L.C. Wells, J.R. Dunster, Stefanie Hawks, and Rob St. John. The calligraphy is by Sue Keenan. According to a flyer, it was also to have had art by Connie Faddis and Mary Bloemker.

This zine was nominated for a FanQ Award in 1986.

From the copyright statement: "If we left anything out, we have every faith that the legal department of Lucasfilm will let us know."

Look, would it help at all if I told you that I didn't have any idea it would turn out this way, either?

As anyone who's ever been ambitious enough to try it knows, putting a zine together is a lot of frustration. From the first "Do I really want to do this?" to the IBM element that suicided one night, nobody who engages in this kind of thing can make it through without a lot of support. My first and deepest measure of thanks goes to Marian Kelly. Gratitude also for their help to Jan Lindner, Stefanie Hawks, Letitia Wells, Rob St, John, Jackie Dunster, Sue Keenan, and Carol Mularski, And, as ever, my family.

The song "Forever Alderaan" is (loosely) set to a theme from the "Jupiter" section of Gustav Holst's The Planets. The part of "Tatooine" was played by Southern California in the summer of 1983.

These pages are fondly dedicated to Jill Berry, who has the courage of a Princess.

May the Force be with you always.

From an ad in Southern Enclave #16:

21 years after ROTJ. Luke gets a pair of half-Corellian princes to train as Jedi Knights. and a former Imp governor has designs on Alliance territory -- and Princess Leia. 228 pp.; art by Dunster. Hawks, Wells, St. John. $12.50 fc.

From a flyer in Contraband #3:

It is twenty-one years after the death of the Emperor. Following a period of chaos, a new Galactic Alliance has been formed. But the struggle is far from over.

The former Imperial Governor of the twelfth sector, Lord Joel Andris, still holds that region in thrall. His power rivals that of the new Alliance, and the two opposing governments are heading for a decisive clash which could mean doom for the Alliance.

Luke Skywalker, working to re-establish the Order of Jedi Knights, has founded a secret training school on a remote planet. But despite his long years of effort, the number of fully-trained Jedi is still very small. And now a new crisis is looming.

Unknown to anyone but Lord Andris, there is a spy among Luke's students. The purpose: to betray and destroy the Jedi Order, and most especially to deliver into Lord Andris' hands the Jedi Master Luke Skywalker...

Speculation Regarding the Author

Some fans have speculated that these novels were written by Melanie R. under a pseud though other fans have denied this is the case.

The two names, however, are openly connected in a number of fan venues.

In issue #23 of the Southern Enclave, the editor and publisher of the series, Melanie R. gave permission for the series to be photocopied for personal use after the zines went out of print.

The author commented upon this zine in 1988 in her author's notes in "Sanctuary".

Ellen Randolph's writings formed me as an author. They let loose my imagination and belief that life after RotJ should be far different from that shown in profic novels. These old paper treasures occupy an honored place both on the shelves above this computer and in my writer's soul.[1]

Maybe I missed something somewhere in A NEW CHALLENGE, but where did you read that Owen took on Beru's last name of Lars? I don't recall them ever even being mentioned. The only story I ever read where he did that was KNIGHT OF SHADOWS, when they fled to Tatooine to keep Luke hidden from Vader's cousin, Koric.[2] (1986)

I got to read "A New Challenge" it first came off the presses, one of the few fanzines to deal believably with the event subsequent to RETURN OF THE JEDI. With 3000 miles separating us, I told [Ellen Randolph] how she was going to get lynched (for reasons I won't mention here, just in case you've mistakenly not read it yet). Surprisingly, however, not only wasn't she lynched, but she was nominated for a Fan Q. [3]

....the story takes place after RotJ, and has little to do with Anakin Skywalker or his fall. Mainly, it is about Luke, Leia, their families, and how they cope with betrayal and exile.[4]

The Sanctuary universe was written in 3 fanzines. 2 were novel length, and the third was even longer. The third had short stories in that universe that spanned before Luke and Leia were born (about their parents) until soon after Luke died at the age of nearly 120, I think. The short stories took place throughout those years and between and after Ellen Randolph's two novels. She did a great job with Luke and with his wife, Jessalyn. Luke didn't marry until his early 40's in that universe, and he and Jessalyn had 5 children. The youngest (twins) were born when Luke was in his early 60's, which wasn't all that old, since most people lived into their 120's or so. This is a very complete and different SW story, as it was written before the EU novels, but it's *very* well-done.[5]

A New Challenge' begins approximately 20 years after the Alliance victory. Luke has begun his Jedi training school on the planet Ajani and Leia is busy being a Senator for the Alliance with Han Solo and Lando Calrissian as Generals in charge of Alliance forces. Leia and Han have twin boys who are highly gifted in the Force and a terror of the palace. Poor C3PO has a terrible time keeping up with them and their furry cohort Wakloo, who just delight in harassing him. When they are 18, they are sent to Luke to begin their training in the Force. Dark forces are sweeping the Senate and the tide of opinion against the Jedi and Alliance forces. Lord Andris, leader by conquest of several planetary systems and a Sith Lord in disguise, has challenged the Jedi and unknown to Luke, planted a traitor in the Jedi School. The planet Ajani is attacked, and the school is destroyed with only a few survivors. Luke and Leia's family and friends escape by blowing up their ship and pretending to be dead. Han Solo is killed in the conflict, and Leia is left to carry on the struggle.[6]

"Trash the Hero"--must admit I am a "get Han" fan. What has not happened to that man "yet -- well, someone will think it up. There are a couple of really hilarious poems covering just that subject. However, there must be a good sound reason behind what happens to our trio. As for any of them dying, it sends me up the wall. I even sold my copy of A NEW CHALLENGE and then had to re-buy when I found out my favorite character has been resurrected. As for the story that upset you, I think you will find it is one of a series (at least I got that impression) and that Luke will come out all right in the long run.[7]

This is the first "big" novel I've read so my expectations may be such higher than those of a more experienced reader of fan fic. ANC was very well written but suffered, IMO, from a pessimistic viewpoint of post-JEDI politics. Although Han and Leia's twin sons are interesting personalities, they are a little too predictable. One thing that particularly irked me, as a Luke fan, was the presentation of the Master Jedi as being "old", was, almost listless and pessimistic from the outset. What was worse, Luke in ANC thinks of himself as an "old man". Twenty years after JEDI, Han only has a few grey hairs and lines on his face; Luke is afflicted by age even though he is at least 10 years younger than Solo! If I hadn't perceived a bias toward Han almost from the beginning of ANC, I may have enjoyed the story more. The pacing was brisk and my interest was sustained throughout. I, personally, couldn't see the Alliance turning on Luke and Leia as it did in ANC, but, since there was a sequel, the author may have justified that plot element later.[8]

I believe that Han Solo is basically a nice, decent man hiding beneath wisecracks and bravado, but some of those 'zine story departures are fascinating! Stretches the imagination a bit, even though I may not always adhere to the philosophies. If a story is well-written and revolves around a believable plot, I don't have a problem with something a little more on the Dark Side. Although not a darksider story, my favorite fan trilogy (by the splendiferous Ellen Randolph/aka Melanie Rawn) made Han a Jedi -- a fannish plot I usually abhor! But she wrote it with enough of a twist, while still maintaining Han's personality, that I thoroughly enjoyed it. I supposed if a story's well written, I don't mind the author taking license. It's when the story is poorly written and also offers an off-the-wall theory that I cringe.[9]

I wanted to point out quite possibly the best SW fan-fic read...ever. I consider myself an old-school SW fan-fic reader, meaning, I was reading this stuff well before the internet. That's when readers had to buy this stuff and then get it through the mail. Anyway, there are 3 vintage Star Wars fan-fic novels called "A New Challenge", "Revenge of the Sith" (yes, written 20 years before the movie came out) and "Sanctuary". And they are very, very good. It takes place 20 years after "Return of the Jedi" when Luke is a Jedi Master, in his 40's, and not married. To make a long story short, the Sith rise to destroy Luke's Jedi school and we come to find out that one his students who is 20 years younger than he (her name is Jessalyn) is in love with Luke Skywalker - but is scared to death of him (because Luke is portrayed as mystical and mysterious). The author leaves us dangling with that knowledge. Then going into the second novel, "Revenge of the Sith", it is 20 years after her first novel, and Luke and Jessalyn are married. When we get to "Sanctuary", her third fan-fic novel it is a series of stories that takes place in her timeline...and even short stories about Luke and Jessalyn early on in their marriage. I discovered that a lot of people are still interested in reading these novels when I did a google, and they appear to be hard to find. I have all of them, and would like to recommend them to the fans here who like fan-fic. Because these novels are the best of fan-fic, to be sure. I've read them countless times, and many of the character's names and plot-lines are identical in her Exile Books which are published professionally. So *wink, wink* ...Han Solo's son is named Pol (Pol's wife is named Tobin) in her fan-fic, and in her novels there is a character named Pol and Tobin too. lol There is a rumor going around that the author of these old-school 1980's popular fan-fic novels were written by a known author named Melanie Rawn. And a lot of the characters names and situations are identical. Anyhow, I was just wondering if anyone has ever heard of these fan-fic novels before. Because I have all of them and they are very well done.[10]

Forget the snoozefest of the SW prequel trilogy. What they should have filmed instead is this series of stories by "Ellen Randolph." They tell the story of what happens after "Return of the Jedi" in a manner that is compelling, suspenseful, romantic, humorous—and can't be put down.