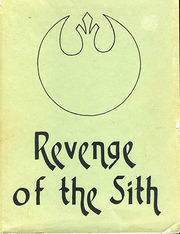 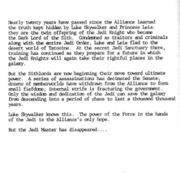 Revenge of the Sith is a gen Star Wars 196-page novel by Ellen Randolph. Artwork by Karen River and L.C. Wells. It is the second in a series of novels.

"Any tpoys in this zine may be attributed to the insidious influence of the Dark Side of the Force."

See: It's difficult to resist Ellen Randolph's interpretation of the STAR WARS universe for Maggie Nowakowska's comments regarding this zine and its universe.

From an ad in Southern Enclave #16: "20 years post-ANC, Luke undertakes the most important work in all the thousand generations of Jedi--work that may claim his life. Art by River, Wells; 200 pp. $14.00 first class."

From the zine: "Nearly twenty years have passed since Jedi Master Luke Skywalker fled to the desert world of Tatooine, condemned by the Alliance along with the entire Jedi Order. At the Sanctuary there, training has continued in secret as Luke prepares for a future in which the Jedi Knights will again take their rightful places in the galaxy. But the Lords of the Sith are beginning their move toward ultimate power. A series of assassinations has decimated the Senate; dozens of memberworlds have withdrawn from the Alliance to form small fiefdoms; internal strife is fracturing the government. Only the wisdom and dedication of the Jedi can save the galaxy from descending into a period of chaos to last a thousand thousand years. Luke Skywalker knows this. The power of the Force in the hands of the Jedi is the Alliance's only hope. But the Jedi Master has disappeared"

Speculation Regarding the Author

Some fans have speculated that these novels were written by Melanie R. under a pseud though other fans have denied this is the case.

The two names, however, are openly connected in a number of fan venues.

In issue #23 of the Southern Enclave, the editor and publisher of the series, Melanie R. gave permission for the zines to be photocopied for personal use after the zines went out of print.

The author commented upon this zine in 1988 in her author's notes in "Sanctuary".

Well, this is it, folks. Hapless Luke has finally gotten the girl, Han and Leia are together, and everybody lives happily ever after -- at least until the Sithlords get out of hock.

No, there will not be "another" -- not another novel, anyway. My thanks to all of you who managed to get through this and A NEW CHALLENGE -- the Force must be with you!

"Forever, Alderaan" is once again (very) loosely set to a them from the "Jupiter" section of Gustav Holst's THE PLANETS. And the part of "Tatooine" was played once more time by Southern California in the summer of 1984 while I was writing this novel.

I am indebted to several gracious and talented people for their work and support during the writing and production of this zine. Karen River and Letitia Wells created art more perfect than my words ever deserved. Sue Keenan did the lovely calligraphy and made sense of the genealogy for me.

For comments, criticism, and caring about the characters and story so much that they compelled me to make the work better than it ever could have been without them, this novel is dedicated to Marian Kelly and Linda Deneroff -- who aided, abetted, and believed.

....the story takes place after RotJ, and has little to do with Anakin Skywalker or his fall. Mainly, it is about Luke, Leia, their families, and how they cope with betrayal and exile. [1]

The Sanctuary universe was written in 3 fanzines. 2 were novel length, and the third was even longer. The third had short stories in that universe that spanned before Luke and Leia were born (about their parents) until soon after Luke died at the age of nearly 120, I think. The short stories took place throughout those years and between and after Ellen Randolph's two novels. She did a great job with Luke and with his wife, Jessalyn. Luke didn't marry until his early 40's in that universe, and he and Jessalyn had 5 children. The youngest (twins) were born when Luke was in his early 60's, which wasn't all that old, since most people lived into their 120's or so. This is a very complete and different SW story, as it was written before the EU novels, but it's *very* well-done. [2]

My two favorite stories so far this year are the novels, REVENGE OF THE SITH by Ellen Randolph and TURNABOUT by Mary Jean Holmes. Ellen Randolph's characterizations are wonderful and she writes good dialogue and character relationships. Her original characters are interesting, complex, and believable.... The artwork of Karen River and Letitia Wells in REVENGE OF THE SITH is consistently well done. [3]

I got to proofread Revenge the Sith, which is set even father into the future from the events of both JEDI and ANC. She'd listen to my comments, go "Uh huh," and do as she pleased with the hyphenations. (Such is life.) If ANC played 52-pickup with the SW universe, Sith reshuffled the new deck. Ellen is a romantic, and she populated her universe with a variety of new and interesting people and problems, with her main emphasis on interaction and characterization. She makes writing look easy, but don't try to second-guess her; her plots are tightly knit and intricately woven. And she has this bizarre notion that the reader must be left wanting more. I've tried to argue with her, explaining that I want all of my questions answered now), but she has this nasty habit of not listening to me — or, worse, laughing. (I'll get even — someday!)

What's so good about Ellen's stories? For one thing, she's willing to take chances. She's the only SW writer I know (though there may be others, and if so I wish they'd get in touch with me) who's willing to extrapolate from the known universe. She's not stuck in the space/time of the filmed trilogy. ...

She can write a plot, tell a story, and, more importantly, make you believe it. She has an innate sense of what motivates a character, and a sense of balance. She doesn't linger where lingering is not required, but she doesn't stint, either. [4]

'Revenge of the Sith' begins twenty years after A New Challenge. Luke has married and has a family. Leia is a grandmother. Leia's son, Gavril, has been traveling around like Han used to, gathering information and supplies. He and an undercover Jedi are interrupted, and he and his captive leave the planet and head back to Tatooine. Bryett Langri, unknown to himself, has been handled by the Sith Lords and planted with Gav with psychic orders to kill Luke when he gets close to him. His attack fails, and the Jedi Master removes the conditioning. This attack is the push which leads to the coming attack on the hidden Jedi School which Luke secretly established after the destruction of the Ajani School. Other factors are also directly affecting Luke as he must find the Jedi secret. If he does not find it, the dark side of the Force will win and plunge the universe into darkness. After the attack, Luke goes into hiding on the farm where he grew up. He goes through much effort to locate the secret and finally succeeds (with help from Han Solo who lives on in Force). He gets back in time to help win the battle against the Sith, but it is only a temporary solution. The solution, however, will give Luke and the others time to rebuild the Jedi in time for the final conflict between the Jedi and Sith."[5]

I believe that Han Solo is basically a nice, decent man hiding beneath wisecracks and bravado, but some of those 'zine story departures are fascinating! Stretches the imagination a bit, even though I may not always adhere to the philosophies. If a story is well-written and revolves around a believable plot, I don't have a problem with something a little more on the Dark Side. Although not a darksider story, my favorite fan trilogy (by the splendiferous Ellen Randolph/aka Melanie Rawn) made Han a Jedi -- a fannish plot I usually abhor! But she wrote it with enough of a twist, while still maintaining Han's personality, that I thoroughly enjoyed it. I supposed if a story's well written, I don't mind the author taking license. It's when the story is poorly written and also offers an off-the-wall theory that I cringe. [6]

I wanted to point out quite possibly the best SW fan-fic read...ever. I consider myself an old-school SW fan-fic reader, meaning, I was reading this stuff well before the internet. That's when readers had to buy this stuff and then get it through the mail. Anyway, there are 3 vintage Star Wars fan-fic novels called "A New Challenge", "Revenge of the Sith" (yes, written 20 years before the movie came out) and "Sanctuary". And they are very, very good. It takes place 20 years after "Return of the Jedi" when Luke is a Jedi Master, in his 40's, and not married. To make a long story short, the Sith rise to destroy Luke's Jedi school and we come to find out that one his students who is 20 years younger than he (her name is Jessalyn) is in love with Luke Skywalker - but is scared to death of him (because Luke is portrayed as mystical and mysterious). The author leaves us dangling with that knowledge. Then going into the second novel, "Revenge of the Sith", it is 20 years after her first novel, and Luke and Jessalyn are married. When we get to "Sanctuary", her third fan-fic novel it is a series of stories that takes place in her timeline...and even short stories about Luke and Jessalyn early on in their marriage. I discovered that a lot of people are still interested in reading these novels when I did a google, and they appear to be hard to find. I have all of them, and would like to recommend them to the fans here who like fan-fic. Because these novels are the best of fan-fic, to be sure. I've read them countless times, and many of the character's names and plot-lines are identical in her Exile Books which are published professionally. So *wink, wink* ...Han Solo's son is named Pol (Pol's wife is named Tobin) in her fan-fic, and in her novels there is a character named Pol and Tobin too. lol There is a rumor going around that the author of these old-school 1980's popular fan-fic novels were written by a known author named Melanie Rawn. And a lot of the characters names and situations are identical. Anyhow, I was just wondering if anyone has ever heard of these fan-fic novels before. Because I have all of them and they are very well done. [7]