A Mid-Spring's Night's Dream, or, Journey to Backstage

A Mid-Spring's Night's Dream, or, Journey to Backstage is a 1968 essay by Ruth Berman and Dorothy Jones, and illustrated by Alicia Austin.

The essay is a detailed description of a group of fans' (Bjo Trimble, John Trimble, Ruth Berman, Dorothy Jones, Karen Anderson and Poul Anderson, Astrid Anderson, others?) trip to see Mark Lenard (as "Oberon") in the Inner City Repertory Company's production of "A Midsummer's Night Dream" in Los Angeles on April 5, 1968.

The essay also contains perhaps the very earliest use (at least in print) of the term trekkie. 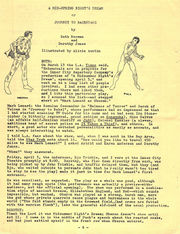 first page of the essay, illos by Alicia Austin

[Mark Lenard] was in silver, blue and green: tunic and tights dappled with shadows like leaves, and an odd little cloak lined with something silvery. He strode angrily onto the stage, surrounded by half a dozen cowering elves who looked much like the Monkees. Robert Ito's Puck, by contrast, looked exactly like Sulu.

[A Midsummer's Night Dream] was what's called a psychedelic production. The lovers were flower children, the music was rock, and the magical effects were accomplished by the techniques of the light show: a sparkling silver globe for the enchantment of the flower; a bank of ultraviolet for the spell of darkness in Act III, Scene II; and in the last scene, when the elves and fairies crept into the sleeping house, Oberon strode forward to the apron and cried, "Through the house give glimmering light." The stage was suddenly filled with golden light, and he and Titania danced to bless the bridal beds.

After [the play] ensued a frantic search for the stage door; it was found on the other side of the building and down two flights of stairs. Elves and rustics were running up and down the halls, and Demetrius stood in his dressing room doorway chatting with passersby and trying to get his makeup out of his eyes. We paid attention only to the names on the doors. Presently we found one which said "Mark Lenard, Robert Ito", and knocked, "Mr. Lenard," I said when he opened the door, "we are Star Trek fans. We have seen you on Star Trek and other shows, and have longed greatly to see you in person. Now that we have seen you, we are very glad," My language gets more formal and archaic as I get shyer. "Thanks," he said cautiously, and came out of the dressing room, we immediately surrounded him with programs to be signed. (Bjo had brought two scripts of "Balance of Terror" and one of "Journey to Babel" to be signed, but then had decided she was too tired to go backstage and had gone home, I, like a fool, hadn't thought to bring my first draft of "Balance of Terror." Next time...!)

[Ruth]: He was startled at this avalanche of unknown admirers, and became more so as his polite questions brought out the information that three of them had traveled from the Bay Area to Los Angeles for the show. Within a few minutes he was totally bewildered, a good deal amused, but pleased nonetheless. Meanwhile, we were blocking the hall, and Karen said, "Please, won't you come have coffee with us?" "Well...yes, thank you. Just a moment while I finish getting this off," he said, indicating his makeup (no pointed ears, however).

Karen went out to bring Poul in, and the rest of us waited. Soon we were in Poul's car, and, as none of us knew the area and its restaurants, we took Mr. Lenard for coffee to the Trimbles' house — where he got port wine instead. We all (including the Trimbles, and Ernie Wheatley, who'd been there as baby sitter) sat around talking for about an hour before taking Mr. Lenard back to the theatre.

The conversation turned mainly on the topic of fandom. Mr. Lenard was still trying to figure out why he was the center of such attention. He knew, of course, that Star Trek had become popular, and that Sarek and the Romulan Commander had been liked, but appreciation of one-episode characters in a series usually doesn't have enough impact to become appreciation of the actor and his work generally. Nevertheless, he commented, the letters he'd been getting recently had mentioned not just his work on Star Trek, but had included catalogues of his work on several shows.

(I don't know about other people, but I'm afraid I was acting out of snobbery in cataloguing the roles I'd soon Mr. Lenard play when I sent him a fan letter—I'd wanted to make it clear I wasn't just a trekkie in love with Spock and therefore with all things Vulcan, especially Spock's father, but rather a sophisticated, mature admirer of good acting wherever it appears. Which I hope is true — but I'm in love with Sarek anyway.)

His appearance won't hurt any [in his roles], either. He is one of the most beautiful men I've ever seen in my life. He doesn't look much like Sarek, except for the bone structure. Colonel Kessler had the closest thing to his own face. His hair is black, flecked with grey (and curly — putting bangs on Sarek must have driven the hairdresser nuts). His great, warm brown eyes are guaranteed to melt any trekkie into a helpless pool of protoplasm. He has deep laugh lines at the corners of his eyes, but no circles under his eyes — clean living, Karen says. He is perhaps forty and tremendously magnetic. He doesn't act much like Sarek, either. You've never seen Sarek laugh. But Mr. Lenard was laughing all the time he was with us; part sheer disbelief, part delight, part natural exuberance. He is (dare I say it?) even more charming than Gene Roddenberry.

I showed him the file cards from the Concordance on the Commander and Sarek, and he autographed them. Reading through Sarek's card, he said, "'102.437 years precisely'—did I say that?" "You said that," I assured him. "It's on the tape." "Well, if I said so...102.437 years precisely." He dropped into character in mid-sentence and gave us the line in Sarek's voice. He demonstrated the Vulcan salute and told us about the makeup problems involved in playing Vulcans: when he'd done the Commander they'd shaved the outer halves of his eyebrows and it'd taken them six weeks to grow back. When it came to doing Sarek, he put his foot down: he had an assignment as an Earthman next week! So they covered his eyebrows with tape and makeup.

[Dorothy]: He gave us his agent's address so that we could write to him. We drove him back to the theatre, where he'd left his car, and watched him stroll away. Then Karen, Astrid and I began to scheme. While down in the backstage area waiting for him, we'd seen a rehearsal schedule for the following day. Why not, Karen said, show up there with some pictures for him to see of the Save Star Trek demonstration in San Francisco?

The next day Poul took Karen to the zoo; that left Astrid and me to scurry over to the theatre and discover that the rehearsal was a mile or so away at Estonian Hall. What's a mile? We walked.

Actually, we would have done better to stay home. Rather than the run-through-the-second-act-for-polish rehearsal I'd hoped for, the director was going through Puck's part line by line to help him feel it better.

Mr. Lenard was mainly feeding him cues—and we had no business being there. But we couldn't bear to go away again, so we covered in a doorway being as inconspicuous as possible. The director looked at us once and ignored us. Mr. Lenard caught sight of us and shook his head with a "these-crazy-kids" expression. After the rehearsal he came out and gave us a gentle chewing out for being there. But he was flattered, the more so when he learned that we'd come first by taxi and then on foot. "All rignt," he said, "get in my jalopy and I'll drive you home." And he did.

"I suppose I'll be seeing you at Columbia Ranch?" he said as he got us out of the car. And now that we know where "Brides" is being shot, he undoubtedly will.

[Ruth]: Sunday afternoon I went to a picnic held by a Tolkien society, and excited members informed me that Scotty might come for part of the picnic. I to feel as if Star Trek were chasing me all over Los Angeles. James Doohan and his wife Anita came and stayed for about an hour. I don't know if they like Tolkien (I think they came out of curiosity to see the costumes and such like), but the Tolkien fans all turned out to be Star Trek fans and clustered around him eagerly. After the picnic I returned to the Trimbles', watched Leonard Nimoy on Gramophone to Groovy, (a special on popular music) singing "Gentle On My Mind" and "Cotton Candy", and took Dorothy to the airport.

It was a "Dream" of a weekend.