The Wonderful World of Makebelieve

The Wonderful World of Makebelieve or WWOMB is a multifandom archive featuring gen, het, slash and femslash fanfiction and original fiction of all ratings. It is hosted by Squidge.org, a fan created free web hosting service. By 2002 WWOMB archived fanfic in 206 multi-media fandoms[1] and that number has only increased. By 2020, the archive was the home of more than 3,300 authors and hosted more than 34,300 stories.

The WWOMB was associated with a multitude of different fandom specific mailing lists. In most cases all fanfiction posted to these lists were archived at the WWOMB unless there was an explicit Do Not Archive notice included with the fic. The Mailing Lists, Journals and Blogs of MakeBelieve were mostly hosted on squidge.org, Yahoo Groups or Livejournal.

The Wonderful World of Makebelieve was known as an archive that accepted stories that were not permitted on other archives. This included slash, femslash and RPF fanfiction. Authors were required to include disclaimers and appropriate warnings and ratings to help readers curate their content.

Archivists and users of WWOMB were aware that it could be subject to C&D notices because of the content it hosted. Their submission rules highlighted that "a number of authors have requested that fans refrain from writing fan fiction based on their work" and "posting these fandoms could result in C&Ds".[2] Despite this it does not appear that WWOMB had an explicit rule against fanfiction from these fandoms. By the mid-2000s a handful of works in specific fandoms where the author had taken a stance against fanfiction were hosted on the site, and WWOMB was affiliated with at least one The Vampire Chronicles mailing list. Back in the beginning the archive had this warning at the bottom of the intro page:

Do NOT link to this site without written permission.

Under no circumstances is this URL to be mentioned in any mainstream media.

Although the characters/fandoms belong to their creators, the stories/art belong to the writers/artists who brought them into the light.[1]

In June 2004, WWOMB was converted to an automatic archive.[3] WWOMB may have begun using eFiction open source software package at this time, or the transition to eFiction may have been later. Changes in 2004 made the archive more accessible to creators. Writers who did not belong to a fandom mailing list, so-called orphan authors, were now able to share their works on the archive. Members of a single fandom list were now able to post in multiple fandom categories. Writers could also revise their works at any time, without the support of an archivist, and add graphics to their works.[3]

In March 2018 makebelieve groups were moved from Yahoo! Groups to Groups.io according to the email sent to the subscribers.

In November 2020, WWOMB was imported to The SquidgeWorld Archive, where it is hosted as a closed collection consisting of more than 2,200 fandoms and 34,000 works.[4][5] The original WWOMB site is still accessible in read-only mode, with a note on the homepage directing visitors to the SquidgeWorld Archive.

In February 2000, Peja gave an interview to COCO CHANNEL which touched on her entry into fandom and the WWOMB archive, which she had by that point been running for roughly a year:

KG: How did get into this line of obsession? I hope you make time to eat and sleep occasionally.

P: The kids signed me up for the internet. Thought it was something I would have very little interest in, but I stumbled on fanfic while. I was doing a search for Blake 7 and the rest is history. That was a little over a year ago.

KG: How long have you had the Wonderful World of Make Believe archive?

P: If I'm not mistaken, I have been doing the archive for about a year. Had to learn it from HTML up, but it was worth it.

The interview also contained an anecdote about a minor incident on the archive involving an author who had been plagiarising:

P: Not really. The archive has basically had very little trouble. Although we did have new writer who had stolen her stories from a couple writers and changed the names. Soon as her deceit was uncovered, her work was pulled and she was banned from the archive.

KG: Considering the size of your archive, that's not bad.[6] 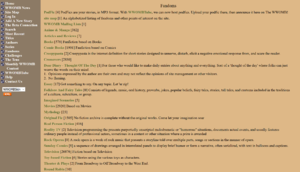 The majority of fanfiction hosted on the archive were slash stories. Most of the archived stories have a strong western media focus and there are comparatively few anime fanfics and RPF.[note 1]

The most popular fandoms on the archive included: The Sentinel, NCIS, X-Files, Buffy the Vampire Slayer, Supernatural, X-Men, CSI: Crime Scene Investigation, Stargate SG-1 and Stargate Atlantis. There is also a large number of original fiction stories hosted on the archive.

Stories on the archive use The Fan Rated Rating System. This rating system was developed by fandom, in response to cease and desist notices to fanwriters and archives using the MPAA rating systems.

Aside from fandoms inside the main archive, WWOMB also have several smaller archives:

The WWOMB challenge page has challenges for all Peja's lists; with challenges dating back to 1999.[7]

The WWOMB monthly contest, awarded the month's most prolific author, one other random author and one random commenter a prize. Winners chose either a $10 Apple iTunes gift certificate, a $10 Amazon.com gift certificate, or one item from the Squidge.org CafePress store worth up to $20, as their prize. Webmistress Peja and hostmaster Squidgie were both ineligible to win this contest. In January 2016, the category for most prolific author was removed from the contest. The contest ran from December 2010 to December 2018, but there were times during this period when the contest was temporarily suspended.

In 2020, WWOMB became the first fansite to be imported to The SquidgeWorld Archive, which itself was the first fan archive to be created using AO3's open-source code.

WWOMB exists in the archive as a closed collection, meaning that new stories cannot be added, but readers are still able to interact with existing stories via comments and kudos. The site remains live at the old URL for now in 'read-only' mode, with a note informing visitors of WWOMB's new home at the SquidgeWorld Archive.

[olderthannetfic]
The venerable Wonderful World of Makebelieve was started in 1999, and its host squidge.org in 1994. Back in the day, this is where you found safe hosting for your porny slashfic.

I’ve just been alerted to the fact that they’ve updated from the old eFiction software to AO3′s and WWOMB has become the Squidgeworld Archive.

I’m really excited to see a second archive using AO3′s format: there used to be countless efiction archives and all kinds of different little spaces, not just a couple of centralized ones.[8]

[squidgiepdx]
Thank you! I had no idea I would be the first until The AO3 folks told me. And if anyone wants to attempt the code for themselves, ping me. I have a guide and copious notes. :)[8]

The multi fandom nature of the site was often mentioned in recs.

It's known as the Wonderful World Of MakeBelieve, organized by the amazing Peja, a gynormous archive of all types of fiction; fanfic, original. There are nearly 29,000 fics uploaded there by 3000+ authors in every fandom imaginable. I've been a member for at least 11 years.

Place for *many* fandoms, including Sentinel, Buffy, Xfiles, Xmen and Magnificent 7. Rare ones like First Wave, Tremors, and 24. Print media like Harry Potter and The Executioner. Gamers fantasies like Final Fantasy 7 &; 8 and Sorcerer Hunters. They're open to just about anything here.[10]

You know when you're in fandom trouble when Peja doesn't have a WWOMB page or mailing list for it. O_o [11]

By 2007, WWOMB was already considered a fannish "dinosaur".

The Wonderful World of Make-Believe (WWoMB) by Peja is a dinosaur that has successfully completed the transition to an automated archive. It is the most extensive multi-fandom slash archive online and archives stories from a multitude of mailing lists.[12]

Comparisons to Fanfiction.net, and later archives, were common; with WWOMB often recced as a slash centric site with more adult content, and less censorship. There was also a general impression among users that readers/commenters at WWOMB were more polite.

Absolutely visit Squidge's WWOMB [Wonderful World of Makebelieve]! This site never gets listed and damn well SHOULD be. Is it kid-friendly? No, it is for adults who want to read the writing of other adults. Authors at WWOMB do not have to 'dumb down' their stories to suit anybody. I have posted my work there for 10 years and never have had any of my works censored. I encourage folks to visit and discover whole, new world of fanfic.[14]

WWOMB is the busiest site on squidge.org, and because of the fan run nature of their hosting service, outages were (and continue to be) a semi-regular feature of using the site. WWOMB's users are usually very understanding of these outages, and appreciative of Hostmaster squidgie's work.

Damnit WWOMB, you're down more often than a (insert dirty joke here.)[15]

WWOMB's import to the SquidgeWorld archive prompted some fans to rediscover it or to revisit old memories of the site.

Oh wow! Some of the first fanfic I ever read (X-Files) is stored on that site! Imma go update the links to them in my AO3 notes.[16]