The U.N.C.L.E. Special is a gen anthology edited by Susan Cole. It is a club zine.

The title refers to Illya Kuryakin and Napoleon Solo's fictional firearms depicted on the show. 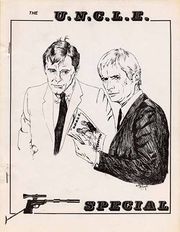 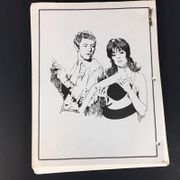 back cover of issue #1, Barbara Fister-Liltz

First we did not have enough orders in advance to offset print this zine. We therefore lowered the price from $10 to $7, orders started coming in a little faster with the lower price, but we now have to have this printed on a photo copier. I saves over half the copy cost but I had to do all the coping [sic] at home and at the office. (Thank Heven [sic] I have An Understanding Boss.) With a little luck we will save enough money from this issue to set aside for the next years Media West Con.

This was to have been 170-200 pages long but we did not receive enough material for this amount. We also had three different people typing the stories (somehow the number of pages shrank, no story was shortened, only fitted on few pages. Strange.)

Since this issue is so short (136 pages) we are offering a coupon for one dollar off the next issue. Price of the next zine will be announced later. Coupons will be mailed out to everyone who purchases this zine, if there are any questions please contact me at the address below.

The original MAN FROM UNCLE program was on the air about twelve years ago, too early to become incorporated into the media fandom movement STAR TREK spawned, although it had inspired a fanzine (FILE 40) as early as 1973. Yet the flame was kept alight in the odd story and newsletter, till the recent broadcast of "The Fifteen Years Later Affair" ' touched off a few new zines and even a convention. The essence of MUNCLE was kids playing spies--romantic, intelligent, pseudosophisti-cated, but not very complex or subtle kids in a game of UNCLE vs. THRUSH that never concluded and never demanded moral reflection. Napoleon and Illya never killed an innocent bystander, and everything they did worked out almost magically for the best. Good is better than evil because it's nicer.

Thus, UNCLE fanwriters don't have a terribly difficult target to aim at in order to produce convincing stories--a plausible plot, a little whiz-bang action, some clever-wry repartee, and it's homefree. Unfortunately, Sue Cole's zine fails to hit even this broad-sided barn. With one exception, all the stories present contrived, unintegrated, or just plain dumb plots, characters either cardboard or ridiculously sentimental, and putrid grammar. It's as if these pieces had been written in 1966 by seventh-graders, and left to lurk in deskdrawers till summoned by a desperate editor. These are not good stories.

Michelle Burton offers a rhyming "Poem Affair" ("Illya and Napoleon are the best / THRUSH is their greatest pest") and a three-page "Non-Crime Wave Affair," in which Solo is kidnapped by THRUSH because that's supposed to keep all UNCLE's several thousand agents preoccupied looking for him while THRUSH attempts to, dare I say it, rule the world. Illya foils the plot with a tip from a wino: "'Under this pub, a big organization has recruited a bunch of us to help them take over the world.'" Hard to lose, with a hint like that. Another mindless three-pager is Marcia Kennedy's "The Old Bazaar in Cairo Affair," wherein Napoleon is kidnapped with an Arab scientist, and this time Illya is tipped off by a kid with the typically Arab-Egyptian name of Amenkhepeshef. As in Burton's non-thriller these top-secret THRUSH strongholds have a flaccid security that would shame Sheriff Andy Taylor of Mayberry; our heroes just waltz in and waltz out, the end.

John Jackson has two comic-strip stories, "The Unclear Face Affair," and "The Cyborg Affair." Both are interesting graphically, if stiff and cartoonish, but unfortunately both are badly written, with predictable Mata Hari and killer android characters. A properly composed comic strip requires both its words and its pictures to convey its story. Jackson's pieces are so talky that there's no need for the drawings, his strong point. Beth Lentz's "The Great Lakes Affair" is pretty bad. It opens with a four-paragraph self-contradictory chase scene that turns out to have nothing to do with the rest of the story. This is followed by a literal description of the show's usual segue: "Music Theme. Fast Film Sweep-by to: Location of UNCLE Headquarters in Washington, D.C." (The story is not otherwise written in script format.) The plot is the encobwebbed professor-and-beautiful-daughter-kidnapped-by-THRUSH-for-his-havoc-wreaking-McGuffin, specifically a "hydro-nuclear dynamics" doodah that lets them build a subway under Lake Michigan. It is rife with ravel plot-threads and silliness like "Nobody expected anyone to enter (THRUSH's secret cave) on foot, which is exactly what they did."

TV shows are not noted for their precision In, for instance, European history, true adult manners, and contemporary politics; they aim for the 12-year-old mind. Charlene Kirby's "Romanian Affair" and its prequel, "The UNCLE Affair," are written on about this level. Illya Kuryakin's grandfather has died, so he, Solo, and Waverly trek to Rumania for the reading of the will. All the characters act like junior-high-school Americans: Kuryakin and his 33-year-old sister squabble over trifles ("Leetrisa stuck her tongue out at her brother"); her boorish fiance offers Illya a drink from Illya's own winestock; Illya keeps bitching about having to eat spinach. The story is staggeringly ignorant of Eastern European history and politics. Illya's grandparents came to Rumania about 1848, "just before the Transylvanian Revolution" (???), and his parents supposedly returned to Russia in 1925 because they were wary of a possible communist takeover of Rumania. Despite some twenty-odd years of communist rule and its confiscations, the Kuryakin family still owned a castle and employed servants, and took ski-ing vacations in Switzerland, yet Leetrisa was unable to notify Illya of her engagement. "'How? Send a carrier pigeon to the US?'" As if whole families carrying enough money to go ski-ing can exit the Eastern bloc, but a 50-lev postcard is interdicted. The only good thing about Kirby's stories is occasionally her characterization of Solo--urbane at least by contrast, and actually witty. The exchanges between him and Illya are as good as some in David McDaniels' novels. Illya: "I told you my grandfather liked big things." Napoleon: "You must have broken his heart."

The single exception to this slushpile is "The First Affair" by Dawna Snyder and Susan Wyllie. It's still not terrific, but at least it's competent. Set back when Illya was a counter-revolutionary in Russia, he is taken prisoner by the KGB and sentenced to interrogation before liquidation. Meanwhile, Waverly has received "appeals from several sources" to have Kuryakin rescued, so he assigns Napoleon Solo to the job. The rest is history. The style is clean and capable, the characters are fairly believable, and the story itself is for the most part interesting.

Good illos by Mark Rogers, Susan Wyllie, Marty Siegrist, Barb Fister-Liltz, and M. Lattany. But unless you're a die-hard UNCLE fan (and I wouldn't blame you), forget it. 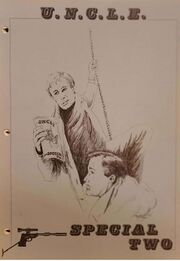 This issue contains seven content winners from Spycon -- the table of contents page does not specify which ones they are. 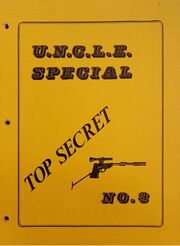 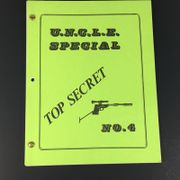 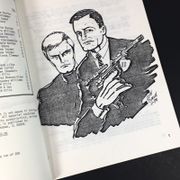 inside page from issue #4, Lee Curiel 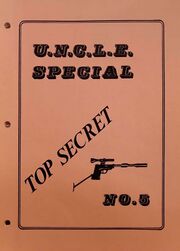