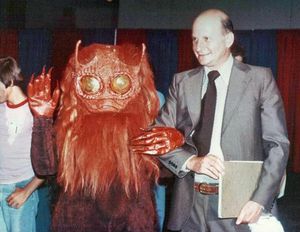 Sue Cole as the Kreno creature, with Space: 1999 series creator Gerry Anderson at SpaceCon I. Photo by Darlene Palernik

Cole was one of the primary organizers of SpyCon, a fan-run series of conventions in the 1980s held in Chicago, Illinois-are.

The cons had a heavy focus on The Man from U.N.C.L.E., but encompassed many other spy/secret agent/police TV shows and movies from the 1960s as well.

She also enjoyed costuming and appeared at a number of Space: 1999 conventions as various characters, including the Kreno creature.

Cole wrote this memory of her first costume:

"I attended the first Space: 1999 convention in Columbus, and I was one of the few dealers who was at the convention... I took 1st place with my version of the chlorine breathing monster from AB Chrysalis. It wasn't a great costume by today's standards, but in the 1970's it wasn't easy to get a lot of stuff to work with; you had to improvise. The head is made from 2 paper mache bowls glued together. The hair used is 'real hair' (my cousin had lots of old wigs that she no longer wanted). The hands and feet were made with Playtex Gloves covered with silicone caulking, with finger/toe nails made from pieces of plastic pop bottles. The eyes were the bottoms of two Pepsi 2-lite bottles, and the ears were also made from the same plastic bottles. The rest of the head was molded with paper mache and caulking. I only had a small hole to breath through for the mouth, and two small holes under the eyes. I had run out of fabric for the legs so I had to attach shorter ones to a pair of shorts to get by." As I said, I had to improvise.[1]