ShadowCon was a Dark Shadows convention. This con has a con zine called Shadowcon. 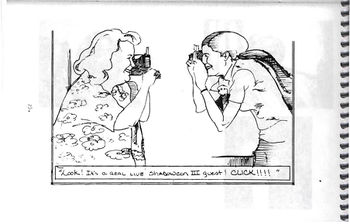 some guests at ShadowCon #4, illo by Shari Metcalf, printed in The World of Dark Shadows #24/25

The first ShadowCon was held in 1977.

In 1983, Kathy Resch and Marcy Robin resigned from the comcon and officially dissolved the connection between this con and the zine The World of Dark Shadows. They cited differences in opinion about the change of direction this con was undergoing -- that of being a Dark Shadows con into a more general horror genre convention. See Open Letter by Kathy Resch Regarding ShadowCon.

In 1987, the con became a more general media con and was renamed Illumicon. Dark Shadows Festival was also a replacement.

One of the first mentions of plans for this first con was in The World of Dark Shadows #9:

Jeanne described the Town and Country Hotel to me - it sounds absolutely fantastic! 600 rooms, 4 restaurants, 4 swimming pools, and a convention center that's the envy of every hotel around. Room rates are usually discounted to members of a convention. Activities that have been suggested by members for the con. Richard Robinson suggested panel discussions on these "Barnabas VS Dracula- Which is the more believable vampire?", "The image of the DS fan" and "The Future of DS". Suggested by both Marcy Robin and Richard Clark is a costume ball with people dressed as their favorite characters/creatures or in the costumes of any of the flashback periods. Marcy also suggested a panel on "What made DS special" and a discussion on the occult in general. Then there's the customary Trivia contest, displays of anything and everything to do with DS, etc. We'd like to get some of the actual episodes to show, but don't know yet if this will be possible. The fact that they were done on video-tape instead of film is bound to present an obstacle - assuming, of course, we're able to rent any from Worldvision at all.

The planned venue changed. From "The World of Dark Shadows" #10:

STARCON (and therefore ShadowCon) has moved. For a variety ot reasons it was decided to change the location from the Town & Country Hotel in San Diego, to the El Cortez Hotel in San Diego. There are a number of advantages to this move--more meeting rooms, lower room rates (which gladdens my parsimonious Capricorn heart) and it is quite close to the airport, and within walking distance of the train and bus stations. The hotel space is limited, so, if you're planning to attend, get your reservations in early. They are charging one flat rate per room, no matter how many people you get inside.

I awoke the next morning and went downstairs and registered at the parent convention, "Westercon" and from there went to Shadowcon registration. There I met Kathy Resch who was chairperson for the DS convention, and editor of "The World of Dark Shadows" An excellent DS fanzine. Looking about the exhibit room there were all sorts of things, ranging from MariJyn Ross paperbacks to a lock of Jonathan Frid's hair . (Seriously) Other articles of interest were Josette's music box, albums, pictures, art, games, puzzles, just about everything ever put on the market! Pictures from episodes and artwork adorned the walls of the room. Off to one corner was a beautiful painting of Barnabas which was for sale for $300.00…. Some loyal fan had taped most, if not all, of the 1795 flashback on a Beta-Max. Many episodes were shown, to the delight of everyone, including myself. Some episodes that were viewed are: Barnabas killing Angelique, Sarah's death, and Josette's jump/fall. After viewing the episode of Josette's plunge from Widows Hill, it is hard to tell whether she jumped or confused by Angelique's witchcraft stumbled over the edge. Either way the scene was quite dramatic." [1] 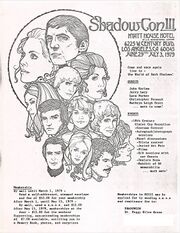 flyer for the third con 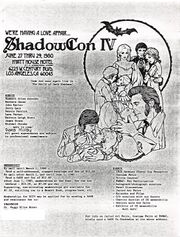 flyer for the fourth con

ShadowCon 5 was held June 27-28, 1981 at the Hyatt in Los Angeles, CA. The zine, Chosen Haunts, contains the prize-winning stories from the ShadowCon literary contest from that year. This con also generated a con zine called Shadowcon and the fan film Diary of Shadowcon. 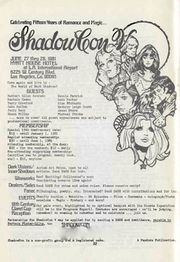 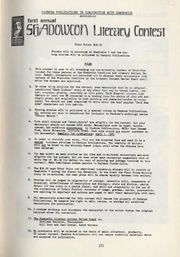 the literary contest rules, printed in The World of Dark Shadows #27. Some highlights were: don't discuss your story with others, there would be no censoring regarding adult/explicit material, stories were to be submitted anonymously, there had to be at least one DS character, first prize was $50, and that winners would be published by Pandora Publications 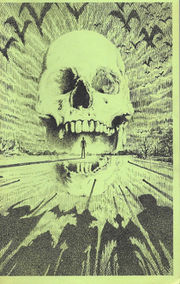 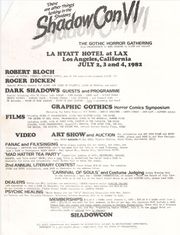 Program book: There are many candid photos of guest stars Robert Bloch and Jonathan Frid. There is also an article on Dark Shadows programming by Kathy Resch with candid photos of Jonathan Frid, Lara Parker, John Karlen, Jerry Lacy, and Robert Rodan. Lots more memories and photos from the convention. 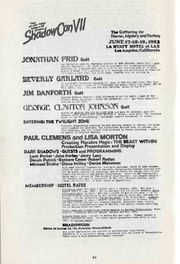 ShadowCon was small as compared with most of the "Star Trek" get-togethers I've attended over the years; but while I'm sure some fans would disagree, I personally find small cons the more ideal. At a smaller gathering, friendly faces and familiar names are much easier to pick out of the crowd, and the guest stars are usually much more at their ease to wander among their admirers, sign autographs, pose for photographs, etc. And all of the guest stars who did manage to get to ShadowCon were, so far as I could tell, very gracious and accessible at SC. There were also plenty of videos to be enjoyed, including the compilations of DS stars in other roles, bloopers {not too hard to find on DS, you must admit) and of course the episodes and movies themslves. All in all, on the surface, SC had all the elements of a good, well-equipped, fun-filled con.

However, all was not perfect in L.A.--in fact, something was downright rotten. Everyone is by now familiar with the argument posed recently by some of the various US fan publications: not enough mass participation, not enough 'extracurricular' interest on the part of some fans, not enough insight and motivation to make fandom worthwhile or relevant, etc. ((Note: See Bill Hunt's "Dark Tower" a recent "Inside the Old House" for clarification of that argument. KR.)) However, though the purpose of those articles seemed to be to stir up some fans and get them more involved, some of the things I witnessed at ShadowCon made me wonder exactly what these self-appointed "guardians" of fan integrity were trying to accomplish. For one thing, there was certainly an over-emphasis on "security" at SC--committee members keeping the Comm Suite number secret, instituting a virtual strip-search at the Art Room (and I personally heard the name of a very well respected fan mentioned in connection with theft--all because she had carried her purse into the room!), and very rudely ordering gophers, "the public" (read; con supporters), and even other committee members out of 'restricted areas' (otherwise known as empty rooms). Granted, there are dishonest people out there, but the condescending attitude present during SC VII was totally uncalled for. I think the perpetrators of this kind of thing would do well to remember exactly which section of fandom will be shelling out twenty dollars apiece for next year's con, and they should also be made to understand that we are all fans--be we committee members, writers/artists, general consumers, whatever. We are united for a general purpose--to enjoy and preserve DS, and to say that some fans, because they have connections, talent, Committee badges, whatever, are more intelligent, more trustworthy, more "respectable" than other fans is downright wrong. It is even worse to run an entire con for the benefit of a chosen few, while commandeering the superior equipment and room space for the more "important" events, regardless of which activity more fans wish to take part in. I can only gape in astonishment when some "fans" deride the "average" DSer for not getting more "involved" in various things when at the same time they are doing everything possible to make him/her feel totally unimportant and perhaps even unwelcome in fandom's self-appointed "upper circle". Fortunately, when I think of ShadowCon in the future, it will be warmly--because of the efforts of some of these same "average" fans (who are some of the most interesting and friendly people you'll ever want to meet), some of the major fanzine editors, and those on the other half of the committee. It was really your con, gang, so thanks.

There is a final memory I would like to share: I was a volunteer/gopher at SC, and one of my duties involved running some DS videotapes into the wee hours of both Friday and Sunday nights. I wish to make it known, here and now, that upon no occasion during either presentation did any fan wet his or her pants, or require any assistance in that area whatsoever. [2] Thanks. [3]

ShadowCon VII was my first. To me, Jonathan Frid always was DS, so seeing him in person was exciting- I found him to be friendly and I was impressed during the autograph session. After about 45 minutes someone from the committee asked if he wanted to stop, and he answered no, he was happy, and kept on for probably another half hour. / I was lucky enough to be at Kathryn Leigh Scott's table, and I swear she's prettier now than in the OS days, When she found out I was from Texas, she kidded that if I was an oil man, she might like to get to know me better! She's a very classy lady. / John Karlen was incredible. I found him to be a back-slapping type of guy--so friendly it was incredible. If someone asked to have their picture taken with him, he would put his arm around that person as if he was a member of the family. / The impromptu song-and-dance routine with the wolf's head cane between Jonathan Frid and John Karlen was great. So was the posing for the "You betrayed me, Willie!" pictures. I haven't seen so many flash bulbs going off at one time since the Miss America Pageant. I'll remember for a long time when, after these pictures were taken, someone shouted out, "Thank you!" And John Karlen said, "No. Thank you for making all this possible." Kathryn was anxious to see the blooper tape, and Lara was laughing so hard she was rocking back and forth in her chair. It was good seeing all of them enjoying themselves so much. / There was some very good art to see. In the Dealer's room, I picked up a number of DS scripts and paperbacks and back issues of "Inside the Old House". I still can't believe Jonathan Frid's binder went for $300! [4]

Very disappointing. I went on... the assumption that this was a Dark Shadows con. In addition to a great deal of poor planning and management, we were told that Dark Shadows fans represented only 10% of the attendees and were generously given 20% of one of the room's time. The con was obviously being run, this year, for V fans. Let the con committee hope that V is still around next year, as I doubt any Dark Shadows fans will bother to attend in the future. [5] 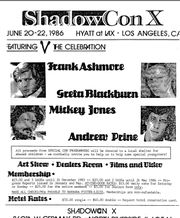