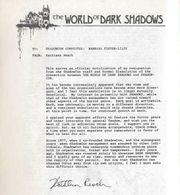 After the first four or five years, the first Dark Shadows convention underwent growing pains and some dissent regarding its focus. Two of its founding members resigned after a 1983 open letter.

The letter was sent to the ShadowCon comcon, Barbara Fister-Liltz, and then printed in The World of Dark Shadows #34.

This serves as official notification of my resignation from the ShadowCon staff and formal dissolution of the connection between THE WORLD OF DARK SHADOWS and SHADOWCON.

It has become increasingly apparent that the view and aims of the two organizations have become ever more divergent, and I feel this association is no longer mutually beneficial. My interest is primarily DARK SHADOWS, while that of the ShadowCon management has now turned toward other aspects of the horror genre. Each goal is worthwhile. Each, now obviously, is moving in a different direction, and a continued association would only create obstacles, at this point in time, for continued growth of both. I applaud your apparent efforts to feature the horror genre and other interests for general fandom, and wish you the best of luck in achieving those goals. I support you in spirit, but, as in all business arrangements, there comes a time when you must separate your camaraderie in favor of what is best for all.

Since 1977, when I co-founded ShadowCon, and the subsequent years when ShadowCon management was assumed by other individuals, ShadowCon has undergone tremendous growing pains both in organization, format and temperment. Eight years ago, ShadowCon was created solely to showcase DARK SHADOWS, and I gladly gave of my time, energy and resources to see the reality of that pursuit. But now that ShadowCon has changed focus away from i ts own origins, I feel I must make this difficult choice.

In The World of Dark Shadows #34, Kathy also includes a lengthy letter with includes more details.

As many of you already know, I have resigned from the ShadowCon staff. The letter above, presented to the convention committee on Monday, June 20, 1983, details some of my reasons for this decision. It was a decision I made at the conclusion of ShadowCon 6--that I would only be involved with the convention one more year, and I will explain more below. Meanwhile, I want to thank everyone who both before and after the announcement supported my decision.

I have enjoyed my years with ShadowCon, both as an organizer the first two years, as a participant the following three, and being in charge of DARK SHADOWS programming for the past two. But I feel my responsibility, both to DS fandom and myself is best served by this action. Many incidents combined to form the basis of this decision. One of the major ones Is this; I feel that people who pay to come to a DARK SHADOWS event ought to receive DARK SHADOWS programming. And it Is precisely this programming, which draws a large majority of the attendees to the convent ion,that has been on shaky ground for the past two years. Marcy Robin and myself were given control over DSP after ShadowCon 5. During the year that followed, it was made quite clear to me that DS was no longer considered to be an important part of the convention, and I was told several times they were seriously considering showing only the two movies, and an hour or so of episodes, and leaving it at that.

It was at this point that I made my decision to resign. Both Marcy and myself, and many others, put a lot of tine and energy into the preparations and the actual events of ShadowCon 6. Through the mil* the excitement of people planning to attend was communicated to me, and at the close of the actual event, many people commented they had had their most enjoyable time yet. Nevertheless, I would have resigned at this point, had it not been for one thing: the fact that, three weeks before the convention, Jonathan Frid agreed to attend, and at the convention itself expressed an interest in attending in 1983. His decision, coming so close to the convention, prevented a good many people from attending who would otherwise have certainly come -whether due to lack of money, no vacation time, lack of available flights, etc. I knew a great many people would come the following year, precisely because of this, and I felt the responsibility of seeing they had an enjoyable time.

Nevertheless, the conditions of handling DSP for SC proved a bit more difficult than I had anticipated. DSP was made into a semi - independent event. For the use of a room to show DS episodes and the two movies, plus the rental of a videorecorder, the fee of S300 was required. This was a nonrefundable donation, and I would not be allowed to charge any sort of separate admission, or to hold any sort of fundraising event at the convention itself to raise these funds. Nor would I receive any money at all from any of the membership fees collected. Essentially, I was being asked to pay In order that there be any sort of DSP at all, and one of the clauses of the contract provided that if I refused, or could not pay, control of DSP would then be passed on to another person; that it would be incorporated into the film schedule, and no more than both movies and a handful of episodes be shown.

I have received a great deal of feedback on ShadowCon over the years. One of the most prevalent comments after both SC4 and 5 was that the event appeared to be run for the benefit of the committee, and the fans were a necessary evil. Many people who attended these years told me they never planned to attend another. Which is another reason I welcomed the opportunity to be in charge of DSP the last two years. I'm a fan. I enjoy being with other fans. And I know what other fans enjoy seeing and doing. The fact that the comments ceased about the con being run for the committee -- at least as far as DSP is concerned—at SC6 indicated to me that I was working in the right direction. The fact that several fans, who had seen and heard some incidents last year, came up to me, thanked me for my work, and congratulated me for putting up with that sort of pressure, encouraged me to continue for one last year.

Participating In ShadowCon, meeting with old friends and making new ones has been an extremely enjoyable thing for me. I am sorry it has to work out this way. But the position is untenable, and I would prefer not directing my energies any further into ShadowCon.

The events above will have no effect on THE WORLD OF DARK 5HAD0WS. I have many more issues planned, and material keeps coming in all the time. This sort of participation is what fandom is really all about. I want to thank you all for your understanding In reading the above. It took years it come to this point. But it had to be said.

Also printed in The World of Dark Shadows #34 as a letter from Marcy Robin, co-founder of ShadowCon. An excerpt:

This is to state that I too have resigned from the Shadowcon committee. This was difficult, but I honestly am tired of fighting others who apparently insist on treating a fun hobby/interest as if it was some means to a greater end: ambition, power, ego gratification, etc. Such attitudes are not restricted to DS or any fandom, and they thrive in the real world as well. But they simply are unnecessary and disappointing when taken to excess in one's pasttime. And they inevitably only do needless harm.

I have no argument with SC itself; I've always said the expansion into general horror themes was natural and opened new vistas. But it is unfortunate that the above attitudes of dominance, and the condescension toward DS in particular, have complicated the fun aspect of DS fandom. If SC is to be for all the fans, then let it be. My resignation stems from my belief and fannish experience that fandom means SHARING. It should not lead to divisions, side-taking, false communications, etc. If you sincerely share an interest of any kind, then support it. All the friendships I and others have made, all the good times during SC's 7 years -- these are too precious to be allowed to disintegrate because of the unnecessary hostile beliefs of a few.

For the sake of DS fandom, and to show I do believe in my own definition, I wish SC success. I urge it to provide fair, enthusiastic programming for the DS fans, and to honestly encourage and support other DS cons, fanzine/publications, and independent friendships. Again, if we are involved in a fandom, then we should be true to that fandom, dll of it. Too many groups in science fiction and other fandoms have been ripped apart by the loss of this truism. And, in the long run, it never is fair.