The Sexy Lamp Test is a thought experiment that is designed to gauge how relevant a female character is to the plot of a work, in a bid to highlight poor representation and flawed characterisation of women in media.

As described by Headless (characterandwritinghelp.tumblr.com):

The Sexy Lamp test helps you see if your women are relevant to your plot. This test not only asks you if women are represented, but if they are there to do something.[1]

The test was established by Kelly Sue DeConnick and first achieved wide notice after she mentioned it during an Emerald City Comic Con panel titled "From Victim to Hero".[2] The test specifically referenced and built upon the Bechdel Test, another thought experiment that establishes a bare minimum for how women are portrayed in various media.

In its original wording:

So, there’s the Bechdel test. I’ve got another test that works just as well. The Sexy Lamp test. If you can take out a female character and replace her with a sexy lamp, YOU’RE A FUCKING HACK.[2][3]

The "sexy lamp" in question is a prop from the movie A Christmas Story (1983). The lamp consists of a lampshade over a fake leg, dressed in a fishnet stocking. 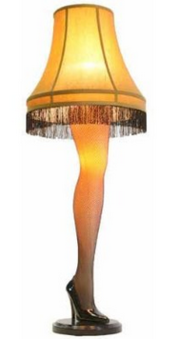 DeConnick's comments were covered in numerous media articles and succeeded in sparking off a discussion about female characterisation and objectification, as well as gender and fanservice, in media.

The Sexy Lamp Test addresses the ubiquitous and much-despised Strong Female Character trope, in which a female character is "strong" (however this is defined) on paper yet completely lacks agency or relevance to the plot.[4]

DeConnick works in the US comics industry, which is home to a wide variety of sexist behavior,[5] including the Fake Geek Girls incident, cosplay-related and other convention harassment,[6] and covers so awful they inspired The Hawkeye Initiative. This was during a period of pressure placed on Marvel to make a Black Widow movie as part of the hugely successful Marvel Cinematic Universe (MCU); at the time, it was difficult to even find Black Widow merchandise in stores, despite an overwhelming amount of merchandise for the male Avengers.[7] Amidst these events, DeConnick wrote the latest Captain Marvel series, starring Carol Danvers, which was one of the few female-led Marvel comics books at the time.[8] The comic achieved a large following among female fans, to the point where a Carol Danvers movie was added to the MCU lineup.

In a 2012 interview with Laura Hudson of Comics Alliance, DeConnick said:

As an industry, we have to make more female-led books that are actually worth buying. Nevermind the Bechdel test, try this: if you can replace your female character with a sexy lamp and the story still basically works, maybe you need another draft. They have to be protagonists, not devices. [Before anyone flips out on me, can I point out that I said we need to make “more.” I didn’t say we’re not making them. We’re making them. Industry-wide, we are making them–but we need to make more.][8]

The initial "maybe you need another draft" was replaced in later statements by variations on "you're a hack".

Interest in the test from comics and fandom circles grew after the ECCC panel. The test was mentioned in several articles in media-related publications.[5][9] DeConnick went on to repeat her statements and elaborate on them during later conventions.[10]

Being sexy and being drawn or posed or dressed in a way that is designed to sexually-excite your viewers is not necessarily objectification. Characters can be sexy and still be complex characters who could not be replaced by a “sexy lamp.“ A good female example of this is Faye Valentine from Cowboy Bebop. Yeah, she’s clearly designed as fanservice, with her midriff-baring “shirt” and short shorts, but she’s also a complex, interesting, clever woman with an intricate backstory and well-developed relationships with the other Bebop crew. You don’t have to find Faye attractive to find her compelling, and she obviously could not be replaced by a sexy lamp.

The Sexy Lamp test was made as a joke but it is interesting in terms of revealing what’s truly objectification and when a character happens to be sexy but is more than that. And it really works to show us the very different ways that media - especially anime (since it has a lot of media that acknowledges the Female as well as Male Gaze) - tends to deal with male fanservice aimed at women, and female fanservice aimed at men.

Namely, the bishie male anime characters that people are always citing as evidence of “male fanservice" are almost never just Sexy Lamps. They’re nearly always fleshed-out, interesting characters to at least some degree. Hell, they’re often the protagonists! Or primary antagonists! But they’re almost always there as something more than sexy decoration. You can’t say the same for sexy female characters in anime. You have your Fayes, but you also have a lot of women who are really just there to be sexy and nothing else.[13]

Sexy Lamp with a Post-It Stuck On

In a discussion about the Sexy Lamp Test vs. the Bechdel Test, trailofdesire proposed a conundrum:

The sexy lamp test seems difficult to deal with, though, primarily because — like, technically, you could not replace Severine in Skyfall with a sexy lamp, because she needs to be animate enough to tell Bond about Silva. But … she’s basically a sexy lamp. So how do you deal with that in this test?[14]

Not that I’ve seen Skyfall, but the modification that springs to mind is “sexy lamp with a Post-It stuck on”

Like, if she is a sexy lamp and also a vehicle for the transmission of information that is slightly better but not all that much better[14]

The concept of a post-it note quickly caught on, and this has become a common way of explaining how women who act as information dumps in storylines are still often objects who don't have independent agency and plot relevance beyond the information they provide to a male character.[15][16]

Relation to Other Tests

The Sexy Lamp Test is often compared to both the Bechdel Test and the Mako Mori Test.[17]

The Bechdel and Sexy Lamp tests measure different elements of female representation - the first measures presence of women and the possibility of relationships between them that don't center on men, while the Sexy Lamp test measures an individual woman's impact on a work.[18] Both are extremely low bars that should be easy to walk over, but some feminists have argued that the Sexy Lamp test should raise more red flags because it shows that a woman in the work has been completely objectified.

Yet other feminists find it more alarming that a simple conversation between two women fails to appear in so many media, since this doesn't reflect real life by objective measures. In discussing how The Avengers (2012) passes the Sexy Lamp test but not the Bechdel Test, scifigrl47 explained:

But how is it possible that movie makers have created some sort of alternate universe where, just by sheer coincidence, two women don’t accidentally speak to each other? How does that happen? It is nine thirty am and I have already talked to about twenty women today, because as it turns out, there are are a lot of us and sometimes we interact.

Failing the Bechdel test points out a fundamental flaw in how movies are structured, how popular media is structured where the default is male (and likely white/straight male) and anything else is an actual statistical freak of nature. When in fact, guess what?

The only place where the world continues to be white and straight and male is in the goddamn media.

Tags: rawr lazy writing when it's so easy to fix really seriously just make the goddamn SHIELD tech that updates Maria about the status of the engine a woman AND POOF You've passed the easiest test since that vision test in grade school the apple is on the table FINE CAN WE JUST IGNORE HOW STUPID IT IS THAT SCREENWRITERS SCREW THIS UP?[20]

The Mako Mori Test measures similar elements to the Sexy Lamp test (an individual woman's relevance to the plot of a work). The Mako Mori test is somewhat more rigorous, requiring a woman not simply to contribute to the plot but to have her own character arc that doesn't exist to support a man's.

The Bechdel test is, very simply, a test that indicates whether women are present in a movie—it is not a test that indicates how feminist or not sexist a movie is. Both the Mako Mori and Sexy Lamp tests, however, are directly measuring how much agency a woman has and how much of an impact she has on the plotline. Mako was integral to closing the Rift, and Natasha led Avengers by recruiting Bruce, manipulating Loki, getting Clint Barton back to himself, oh, and also by defeating a bunch of Russian mobsters. Both women had character arcs which were not about supporting a man’s story, and neither of them could have been replaced by a Sexy Lamp. Meanwhile, Twilight’s Bella could definitely have been replaced by a Sexy Lamp, and she had a character arc, in the loosest of terms, that was all about Edward.[21]

Many fans have concluded that no single test can measure the quality of female representation in a work; tests should be used together as part of an overall assessment of media in general and a specific work.[22]

The point is to use both. The Bechdel Test was always meant to be used on a large scale - to show an overall trend, to be applied to a wide selection of movies. To show a pattern in media representation. As a feminist indicator for any one movie, it doesn’t always work - and that’s fine, becuase that’s not how it was meant to work.

The Sexy Lamp test is meant to apply to a single movie. Does this movie have a women who has agency? The Bechdel test is meant to apply boradly to say - “Look how few women there are in movies, and look how rarely they ineract with each other/are given things to do not about men.” Taken apart, they analyze to different facets of media representation. It’s not a question of vs. There can be many, there doesn’t have to be one, and they work well together. I would say that a “true” feminist movie passes both tests - it has ladies interacting, and having agency.[23]

Most tests call attention to significant problems of portrayal in the media they're designed around, generally with the goal being to encourage creators to think about their decisions in their future works.[24][5]

But why stop at the Mako Mori test or the Sexy Lamp test, both of which only concern one woman’s story? Why don’t we go full-tilt and say that a new test should demand 1) at least two female characters, each with 2) their own character arcs which 3) don’t revolve around men? If we’re feeling particularly up to it, we could even add 4) female character interacts with a named female colleague or family member.[21]