This article is about the gen Voyage to the Bottom of the Sea 94's zine, and for the Craig 007 movie see James Bond. For the SPN vid, see Skyfall (Supernatural vid). 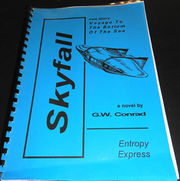 The artwork and introduction is by Mike Adamson. It includes a special bonus: double-A3 gatefold plans of the Seaview as per her recommissioning of AD2002! Drafted by Mike Adamson. See Seaview Layout, Archived version.

The year is 2002. USS Seaview was decomissioned in 1981, left in "mothballs" in Norfolk, Virginia, to quietly wait out the decades until she was finally scrapped -- or until she was needed again.

As summer wanes the world is visited by the unforseen. A great and terrible something streaks down from the sky into the Western Pacific region, and at once scientists detect inexplicable disturbances in the Earth's crust, seismic vibrations, radiation and heat. Slowly they come to realise that the Planet Earth has started down a road that leads to the total extinction of all life. Reconnaisance of the great Mariana Trench is fruitless, as vessels dispatched never return.

The world is in crisis, and elder officers at the Pentagon remember a time twenty years and more in the past when a secret vessel used to do the impossible, crack the mysteries against all odds, and in a last, desperate gamble they order the reactivation of Seaview. Admiral Lee Crane, on the point of retirement, brings together his old crew, under the guidence of the aged but still brilliant Harriman Nelson, old friends who step out of retirement to take on the last great challenge: the stakes are the whole world, it's future, and life itself.

Refitted for sea with state of the art computers, modern weapons and submersibles, Seaview puts out with a team of civilian scientists on board under Nelson's command, to unravel the mystery of the deep. What was it that fell to Earth? What is slowly tearing the planet's crust to shreds? And how can the mind and will of mankind do anything to oppose so titanic and strange a force?

G W Conrad has woven a tale of mystery, adventure and suspense, an undersea odyssey of the highest calibre, fleshed out with state of the art hardware and the characters we followed so long ago. This novel bites hard and has a sting in its tail, a sting the reader will never, ever predict. [1]