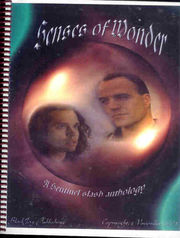 Senses of Wonder is a slash Sentinel anthology.

Senses of Wonder 1 was published in November 2001 and contains 210 pages. It has artwork by K9, FrostDoll and Virginia Sky. Stories are reviewed here at Destinies Entwined.

See reactions and reviews for Search and Rescue.

I couldn't stand it-- but in a GOOD way!! I laughed so hard I just couldn't hold out. Dayspring owes me a load of laundry, now. ^_~ Seriously (sort of), this is an excellent mix of Buffy and TS, although not a crossover. It's a fabulously funny AU that shows that true love *can* conquer all.

Whoa. Where to begin? This is an episode-related story, one of the most used yet never depleted idea jump-starters: Sentinel, Too. This isn't a first time story, but in a strange way (to me, at least) it does feel as though it is a first time. Possibly because in this story, the Clueless Wonders openly discuss everything they were feeling and going through during that horrible time. At any rate, I was gripped by the story, wondering how things would be resolved. I do so love happy endings. ^_~ Kudos to Galina for a story that not only gets reader emotions involved, but also makes everyone happy (as in, the characters *and* the reader)!

3: If I Said, by Kikkimax: I have it on authority that Kikkimax is usually a gen writer, but Dolimir somehow managed to nag her into writing a slash story for the zine. Thank God she did! This is a post-TSbyBS story that is funny and sad and angry in turns, but ends up where the reader needs it to be. I'll be reading this one over and over!

Mainly a Simon Banks point of view story, this is a grin-inducing and warm fuzzies fic in which the captain finds something that Jim has lost. When he returns it, he discovers that it was only one half of a matched set. A very special matched set. I'll shamelessly admit I purred with the warmth of this fic. ^_~

5: In Search Of, by Poyznelf: I have to admit, one of the more original and funny stories I've ever read in which guides and sentinels are a prominent and acknowledged part of society. A personals ad section for these two special breeds where anyone - and here we're thinking of Jim Ellison and Blair Sandburg - can put themselves on display in the hope of attracting a partner and mate. Nice element of foreshadowing brought into play with the addition of one Alicia Bannister who answers Blair's ad as well -- and then is ignored when Blair chooses Jim and vice versa. A really good read; I'm hoping like hell there'll be a sequel! Why not? I usually hope like that every time I read Poyznelf's work!

6: Into the Mystic, by Greenwoman:

A TSbyBS aftermath story by Greenwoman, one of my favorite people. This one is sad, but offers a hint of hope, forgiveness, and closure. Features the death of a major character after it has taken place and deals with miracles and the belief of them and told very tastefully. Paves the way for a sequel, if the author so chooses. (Yes, Greenie, that *was* a hint. ^_~)

Oh. My. God. *swoon, thud!* One of the *hottest* AU's I've read in recent memory, this is a story about luck in gambling and love, on a few rolls of a pair of black and gold dice. Come meet wealthy millionaire gambler James Ellison. Along the way, he meets his "good luck piece", namely one starving grad student by the name of Blair Sandburg. Blair is in Vegas for the express purpose of saving one of his friends from certain doom, only to end up in a situation that was more than he'd bargained for. This story is long, hot and slow, and will have the reader (see: YOU) sitting on the edge of the seat, waiting to see what's around the corner for these two pair.

8: On Two Levels, by Poyznelf:

Holy crap! She done it again!! A short little vignette that not only leaves Our Heroes in an agony of frustration, but the reader as well for wondering if or when things will ever get going! Hey! Yo! Get your elfy-self in gear and start up a sequel, will ya?! *Thank* you. ^_~

9: Revelations and World Truths, by Lilguppee:

A wonderful, warm-fuzzy story in which Jim finally gets a clue as to what life is like for an anthropologist always on the go. Especially one who always gives what he can for those who need it. Set after the "Survival" episode, Jim has many revelations as he helps his friend maneuver about campus, and takes his role of Blessed Protector up a few notches.

10: Search and Rescue, by Romslinger:

*sniffle* Pardon me while I dig out my hankie *hoooonk!* Ah. There we go. Now, then. Romslinger knows I adore her work (and since she's a friend, her as well, but that's besides the point). She knows I fully expect her to continue to write the lovely, emotional, thrilling work she's displayed in the past. I am pleased to report that she has once again met my expectations. This wonderful AU in which Blair is a member of the Search and Rescue organization that employs people and their highly-trained dogs to search through disaster sites for living and dead bodies. His companion is a half-wolf, half-German Shepherd by the name of Mac and they share a special bond. This bond comes in handy when they're sent down to Peru to locate bodies in the wreckage of a horrendous earthquake. One of those bodies is a Major James Ellison. A wonderfully different take on a well-known Near Death Experience, Blair and Jim still manage to meet and connect, though separated by a huge mound of debris. And despite all odds, they still fall in love. Oh, hell. Pardon me again. *sniffle, sniffle, hoooooonk!*

One of the best spook stories I've read in a while, this tale is told with a delightful blend of smart-assishness, humor, incredulity, anger, need -- oh, hell, it pretty much runs the emotional gamut. It starts out with a sad beginning and ends with a happy ending and the realization that justice does get served and it's never too late to go home. The reader gets caught up in the existence of a cranky, 25-year-dead ghost by the name of Joe Kennedy and his entanglement with Blair, Jim, and Jim's spirit guide. Bottom line: this story is a hoot and well worth the reading time. Four paws and a tail, up! And while the cat is on it's back, give it a belly rub. They like that. ^_~

12: Something Evil This Way Comes, by Dolimir

See, this is the kind of thing that can really piss a person off. Well, if that person happens to be insanely jealous of really good ideas put down on - well, no, this ain't paper, is it? - whatever the hell this is in such a fascinating, scintillating way that no one (and here this person is thinking of themselves) can ever, ever top it, then yes. I mean, it's really not *fair* to think up such a clever AU in which Blair meets Jim and his unit in N'awlin's, of all places (I think I just pissed off a shrimp-trawler load of Cajuns). Not only that, but Blair is the *good* witch! No, no, no; not a witch *doctor*, I mean an actual witch! Think Glinda, but without the pink or the feminine charms. And definitely a better voice. (shudder) Anyway, it's a no-shit punch-up between the forces of good and evil as Jim's unit, The Panthers, track down a rogue CIA agent - who is, miraculously, NOT Brackett! Things ensue when Blair is drawn into the game and my, oh my, do the sparks ever fly when Blair and Jim - who knows *exactly* what he is and doesn't freak out - bond to give each other strength. Although, you'd think with that kind of athletic maneuverings going on, they'd both be in wheelchairs, but that's for later in the story and oh, hell, just go read it, okay?! I'm going to go chill out, re-think hiring a hitman to clear the way for the rest of us wanna-be great writers, and then read it again, 'cause golrammit, I'm addicted. I'm gonna *get* her for this. But only after the fifth or sixth reading...

Alyjude. One of my most favorite people in the whole wide world. But don't let that stop you with the thought that this one might be biased! Many of us slashers out there have read Alyjude's work and considered her something of a genius, or at least just a really entertaining writer. One of the reasons *I* like her is because of the real-way her characters think, speak, babble and argue, much like people in real life would. It's Reality Fanfic! This time is no exception. Episode related to that awful time when Blair was merely damp, not dead (denial ain't no river in Egypt, kids), there's angst a-boundin', with a delightful mix of humorous memories and funny in-story stuff. Although, since one of my bestest friends in the world is named Rocco, there's this one point in the story where I had a bad mental image that nonetheless made me laugh long and loud, but what the hell. It does a body good. Speaking of good ... this story ... told in Aly's usual style, the guys work things out and Jim finally gets a clue because Blair is finally being completely honest and talking and actually *saying* something for once and not just moving air around in the shape of sound. Really good piece of first time, here. As usual, I'm blackly envious of her talent, but thankful for it as well, since she provides some fabulous entertainment. [1]

[comments on publisher]: This almost falls into the category of "gushing," but in light of various complaints about publishers not coming across as promised (including one of my own), I really have to sing the praise of two publishers. I ordered a copy of Toshua's Shaman exactly 9 days ago and have it in my hand, mailed from Nuthatch (JJ) all the way from Australia. It doesn't get much better than that! I don't necessarily expect that kind of turnaround time, but I sure would like to hold them up as a shining example for at least one publisher I've been waiting for months for even a reply to emails (not mentioning names---yet). I even got prior confirmation that the zine had been sent. The same can be said for Black Jag publishing which I ordered from on the same day as Shaman, and got it one day later than the Nuthatch shipment. I realize people operate their fanzine presses on different levels all the way up to a business and that RL often has its say, but after having a couple of bad experiences after many years of nothing but good experiences, I was sort of getting leery of ordering by mail. [2] 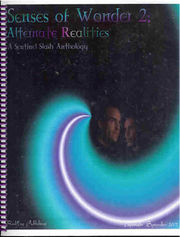 Senses of Wonder 2 has the subtitle, "Alternate Realities." Published in 2002, it contains 376 pages.

See reactions and reviews for Moonhunt.

See reactions and reviews for The Aegis Group. 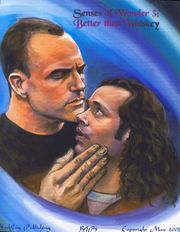 Senses of Wonder 3 has the subtitle, "Better Than Whiskey." It contains 350+ pages and was published in September 2005 (though ad says MediaWest 2005, which was in May).