In the canon of the show Stargate Atlantis, a Runner is a human being who has been chosen by the Wraith as prey to be tracked and hunted for sport. Runners have a tracking device surgically implanted in their bodies which emits a signal strong enough to be detected across planetary/galactic distances. They are released into the Pegasus Galaxy to use the stargate system to evade their hunters as best they can. The Wraith also seem to use Runners as a perverse kind of bait; if a Runner lingers for more than a brief time in any human settlement (the fatal time frame given in episodes is generally one night), the Wraith hunting him/her are likely to descend and kill the inhabitants. Runners who succeed in evading capture and death lead very solitary lives.

Ronon's past as a Runner is usually part of his characterization in fanfiction. Stories often look at the consequences it has for the present, how it shaped Ronon, changed him and defined him, how it turned him into the man we meet in the episode Runner, or how far he has come since then.

For example, in Eildon Rhymer's Old Leaves[1], Ronon is on the run again but this time he is not alone; Sheppard is with him. They are not running from the Wraith but that hardly matters. The comparison between what it was like for Ronon when he was on his own, and what it feels like now, shows how much he was not all right back then and that he was only fooling himself when he thought that he didn't need anybody. 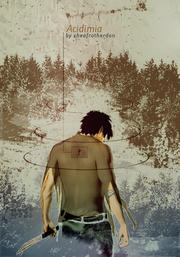 Cover of Acidimia, by newkidfan. It shows Runner!Sheppard from behind. His scar from the Wraith tracker implant is highlighted.

In the AU Where the Ways Divide[2], the Runner concept is used to make the parallels between John and Ronon visible.[3] The story describes the first meeting between Ronon and Sheppard, only this time it's Sheppard who has been a Runner, Atlantis that's been destroyed, and Ronon is the one who saves him.

Runners can be an interesting plot device in many different contexts. In a complex examination of Runners, Domenika Marzione's Matter, Form and Privation explored the possibility of unethical Runners and the steps that Atlantis must take to deal with them.

In Acidimia, John is turned into a Runner. One of the main functions of the Runner element here is to separate John and Rodney so that the story can explore the angst this would cause without giving too much away about the nature of their relationship.

Running on Empty[4] by Sholio has both John and Rodney as Runners which works effectively as a plot device for angst, Sheppard whumping, and it gives Rodney the opportunity to shine in a situation that is difficult for him to master.

In the Mensaverse AU story Heteronormativity, Gender Construction, and Nonverbal Signalling in Intercultural Communication: A Comedy by Mad Maudlin, it is Teyla who survived multiple years as a runner, and finds her way back to group and romantic socialization in Atlantis.

The Tomorrow and tomorrow and tomorrow series by Tassos uses the Runner idea for a plausible crossover that makes it possible to take a different approach than the obvious one for a meeting between the Atlantis characters and Farscape's John Crichton. Crichton is a pilot and theoretical physicist which would make Sheppard or McKay the characters he would be most likely to interact with. However, getting turned into a Runner, after he falls through a wormhole and ends up in the SGA universe without a way back to the Uncharted Territories (wormholes, parallel universes and Crichton's bad luck are all canon in Farscape), gives him the opportunity to go native, Pegasus style. By the time he comes to Atlantis, his outsider POV is already established and sharing the experience of being a Runner with Ronon trumps all the other possible connections that might have been more prominent under different circumstances. One part of the series uses Runner!Crichton for a crossover with Supernatural where he meets Dean Winchester;[5] the story uses the SGA universe and the Runner concept without any SGA characters present.