Noromo or No Romance (NoRomo) was used in The X-Files fandom to describe fans with a preference for the relationship between Mulder and Scully to platonic, both in readings of canon and in fan fiction.

Noromo fans were often at odds with Shippers, or MSR fans. 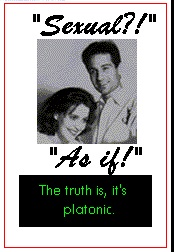 Noromo activities were taken to satirical extremes by the Mulder And Scully Hate Each Other (MASHEO) movement: "Mulder and Scully Hate each other? The idea is absurd. Almost as absurd as the ideas that Mulder and Scully should, could, or want to, be involved romantically."[1] Noromos had their own folder on the official Fox message board (now at Prospero), after they took over the abandoned Kritschgau folder. It was a place of satirical posts, filk parodies, MASHEO Theories of Hatred and Completely Irrational Noromo Arguments. Other X-Philes hung out there - slashers, the odd forum troll or mod, and various kind of MSR shipper including intelli-shippers (shippers who considered themself a cut above the allegedly drooling masses of the MSR folder), fini-shippers (who didn't want to see a Mulder/Scully relationship until the series finale) and darkside-shippers who reckoned the Noromos were just cooler.

Actually, the term NoRomo was conceived *by* NoRomos, because they didn't like the term "NAXIS" (an acronym coined by shippers which stands for Not a Kiss (X) In Sight) and felt it was derogatory and also didn't like the term non-shipper or antishipper because they felt that it made them sound like they were against the relationship - which they are not - but rather that they are against the romance - hence NoRomo. [2]

While the vast majority of Philes probably fell into the shipper category in some form or the other, there were also those who simply did not want a romantic relationship to evolve between the two characters. Some thought like finishippers — they felt an explicit romance didn’t suit the show. Others found it refreshing to watch a friendship and business relationship between a male and female character that didn’t turn into the usual romances seen on TV. And some, frankly, really enjoyed taunting shippers — playing jokes on some of the more emotional ones on X-Files forums.

There were also some noromos who took things a little further, forming communities like MASHEO (Mulder and Scully Hate Each Other) where they worked very hard to prove exactly what the acronym stood for. This sort of thing was mostly a fun satirical activity for the less romantic Philes on the Internet, though perhaps there were a few folks who truly believed it. Though it wasn’t exclusively a noromo trait, these fans were the types most likely to write things like filks — song parodies that tended to make fun of Mulder and Scully, Chris Carter and just about anything affiliated with The X-Files. Noromos also generally got along very well with fans that wrote slash fiction, since those Philes were rooting for less traditional relationship pairings such as Mulder/Krycek or Mulder/Skinner.[3]

Noromos are generally understood to have lost the battle with shippers, since MSR became canon.

This leads me to the main, most practical reason why MSR is all around us: It won. Even creator Chris Carter, self-avowed Noromo, is a full-fledged convert as anyone who’s seen I Want to Believe can attest. The creators are Shippers, the writers are Shippers, the actors are Shippers, and the studio has been fighting for a Ship since the conception of the show. If you’re still trying to stick to your Noromo guns, you’re swimming up a very strong stream.[4]

There seems to be a myth about noromos: that we weren’t interested in the relationship stuff, that we only watched the show as a police procedural, a supernatural thriller, or a political drama. Because narratives about the X-Files fandom tend to focus on shippers, noromos get cast simplistically as their opposites. They are defined by what they were fighting against, and so people fail to ask the obvious question: What were they fighting for?

Even after twenty years, this still annoys me. In fact, the disdain faced by noromos has gone a long way to confirming me in my “noromo” identification. Back when The X-Files was on, I actually thought of myself as more of an “anti-shipper” – by which I meant that I objected, not to a romantic relationship between Mulder and Scully, but to the shippers who seemed to view that relationship as inevitable. But in the wake of the shipper victory, I’m distressed by how few people defend or even acknowledge the opposing side. And I think it’s time to correct that.

I can’t speak for all noromos, but I can speak for myself.

For me, being a noromo was a lot like being Agent Mulder. I “wanted to believe” – specifically, I wanted to believe that it was possible for a man and a woman to share a relationship that was intimate, passionate, and affectionate without being sexual. The shippers were like Agent Scully. They were sceptical about the platonic relationship, constantly affirming the received wisdom that intimacy, passion, and affection were only for sexual couples.[5]

It’s the restraint of that heteronormative box for relationships that Stevi [a Noromo] bristles against, especially when it comes to Mulder and Scully. We’re not here to tell you how to be a fan or what kind of fantasies to have, but for us the real joy of Mulder and Scully’s partnership lies in the intimacy they share as companions, confidants, and colleagues that is decidedly non-sexual in nature. (Although she admits that her initial noromo feelings as a teen might have also had a lot to do with her own very romo feelings for Mulder—an impulse she now questions every time she watches an episode of The X-Files as an adult woman in her 30s.) This is not to say we reject any and all sexual tension between the two. We recognize that some sexual tension might be natural to a pair who enjoy a lasting and really rather tender intimacy. We object, however, to the way conventional shipping foreground the centrality of sex and obscures other, equally as interesting intimacies. We also object to it because it naturalizes the role sex can play in the disempowerment of women. Dana Scully defied the cultural myths young women were fed in the ’80s and ’90s. If representation matters, and “The Scully Effect” proves that it does, then seeing a career-oriented woman whose story did not center on her romantic partnership with a man was a watershed cultural moment. To ship Mulder and Scully is, to Stevi, an act in defiance of Scully’s completeness on her own, one which dangerously replicates the cultural narrative that people of different genders can’t be friends or in a working partnership without becoming romantically involved.[6]