From Fanlore
(Redirected from MLP)
Jump to navigation Jump to search 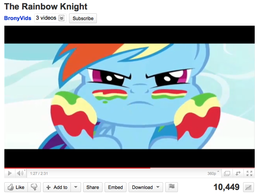 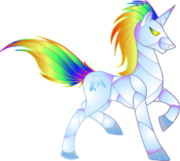 Fans of the series have created a variety of fannish works. Because there is a lot of texture to the characterization of the ponies, both light and dark versions of the ponies get written. Cupcakes is the most infamous of the darker stories in MLP fandom, and postulates Pinkie Pie is a serial killer. [know your meme analysis of the story]. Stories with a similar bent are usually labeled grim dark.

Fans aren't just creating mashups however. Along with more traditional fanworks like fanfic, art and vids, MLP fandom contains a large number of musicians that create original songs inspired by the show in a variety of styles, enough to supply several 24/7 Web radio stations specializing in pony music.

Fans are also active in the gaming community, and have created many mods on different gaming platforms such as Minecraft, Team Fortress 2, Garry's Mod, etc. These versions of the ponies also appear in fanfiction and fan art outside of the game mods.