Heavy Fucker is a series of gag or parody Harry Potter doujinshi by Omega 2-D. Most of the stories in the series are James/Snape, though some may contain Harry/Snape and/or Harry/Draco.

The title of the doujinshi is often censored, so they are sometimes sold as "Heavy Fu_ker" or "Heavy Funker."

Revenge of the Father

Heavy Fucker to Oyaji no Gyakushuu (Heavy Fucker と親父の逆襲), sometimes translated as "Heavy Fucker and the Revenge of the Father", was released on August 9th, 2002.[1] It is 58 pages long.

One seller describes: "No real pairing but a lot of characters are after Snape [plus] maybe a little Harry + Draco."[4] Others describe the main pairings as a competition between Harry and James for Snape.[5][6]

Another seller writes: "Really funny, dirty doujinshi. Focusing on the Marauders, Snape, and Harry. It's a bit of a Star Wars parody."[7] It seems to be set partly in the Marauders era and partly in canon era, and it contains R-18 material.[8][9] 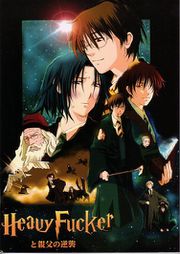 Sample pages from this book can be viewed via Wanderer Owl, Mangafish, and mamadou0704's and ryusoken's auctions.

It is set during Goblet of Fire and features the James/Snape and Harry/Draco pairings,[3] and possibly Snape/Remus and Harry/Snape. One seller describes: "Ridiculous but funny Harry Potter doujinshi. Featuring James/Severus and Harry/Severus pairings. Adult Content."[12] 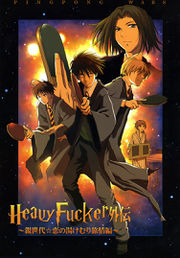 It is set in the Marauders era and is primarily James/Snape, though it may also contain some Snape/Lupin.[14][15] The Marauders and Snape go to a hot spring over Christmas vacation, where they have a strip ping-pong tournament. One seller writes: "A ridiculous, but funny doujinshi featuring the Marauders and Snape. A fierce ping pong battle takes place. Some James/Severus content."[16]

This doujinshi has been scanlated into English by Otaku Pink[17] and into Italian by YumeWorld.[18]

The Kingdom of Slytherin: Episode Red 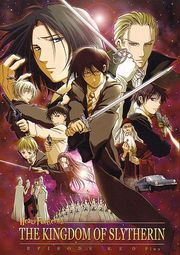 cover of Episode Red Plus

"When Snape gets an enchanted ring, what evils will awaken?!"[20]

"With a name like "HEAVY FUCKER: THE KINGDOM OF SLYTHERIN" you'd think the thing would be brimming with hot, dripping wands and the wizards who love them, but it's really just a ridiculously well-drawn action/drama romp featuring young James and company and a few OCs (including some kid with guns, way to miss the point, artist). I did like when Lupin stabbed Sirius. He claws a lot of people in this story. That aids my interest.:[21]

The Kingdom of Slytherin: Episode Red Plus

The Kingdom of Slytherin: Episode Blue 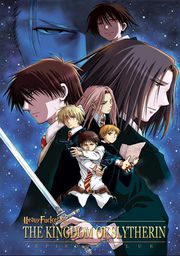 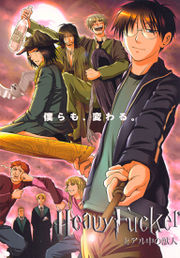 The story is based on Prisoner of Azkaban[26] and is Remus and Snape-centric. One seller writes: "There's also a hilarious section with Harry watching questionable videos only to be caught by Draco!"[27] Pairings include Harry/Draco and Snape/Lupin.[3]

This doujinshi has been scanlated into English by Otaku Pink[28] and into Italian by YumeWorld.[18] 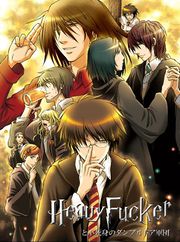 Heavy Fucker to Fujimi no Dumbledore Army (Heavy Fucker と不死身のダンブルドア軍団), or "Heavy Fucker and Dumbledore's Phoenix Army", was released on December 29, 2004.[29] It is 36 pages long.