From Fanlore
(Redirected from Dorothy-Myfanwy Stories)
Jump to: navigation, search

The Dorothy and Myfanwy Series is a set of seven Star Trek: TOS stories by Dorothy Jones and Astrid Anderson.

The series was discussed in Star Trek Lives!. 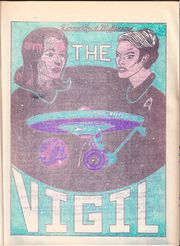 art by Anthony Tollin in issue #7, it may be the first instance of color art in a Star Trek fanzine.

The "Dorothy and Myfanwy" series of stories by Dorothy Jones (later Heydt) and Astrid Anderson began in T-Negative #1, edited by Ruth Berman, in June 1969.

These are seriocomic tales about two junior officers, linguist Dorothy Conway and xenobotanist Myfanwy Orloff. Eventually they marry Spock and McCoy, respectively; but these should not be mistaken for Mary Sue stories. The two women are portrayed as highly intelligent and educated but otherwise perfectly normal, without unrealistic traits; they are exceptional people on a starship full of exceptional people. The storylines and canon characters are well in keeping with original series episodes such as "Shore Leave". The stories reinforce the canon from "Where No Man Has Gone Before", that by the time of Star Trek, psi abilities are generally acknowledged in earth societies, and all Starfleet cadets are tested for ESP.

A linguist and science fiction enthusiast, Jones created a Vulcan language and had begun exploring Vulcan culture and the wider universe of the Federation when the first Kraith story by Jacqueline Lichtenberg came out in T-Negative 8.[1]

These stories were the driving force for some early color mimeo in the zine series, T-Negative. In 2017, Ruth Berman wrote:

When I started [T-Negative], I was producing it on a Ditto machine. With the Ditto process, it is fairly easy to use different colored masters to produce color work – but not so easy that I felt able to do it myself. (The b&w covers were done professionally, by photo-offset.) The reason color started showing up in T-N was that Anthony Tollin started subscribing, and enjoyed the Dorothy/Myfanwy stories, wanted to illustrate them, and had the artistic and technical skills to do it in color. The drawback to Ditto is that you get only some 50-100 copies before the master is worn out. When my subscription list got too large to handle on Ditto, I switched to Mimeo, which allows many more copies, but cannot match Ditto for placement of color detail and makes even the rough kind of color that can be done much more difficult. So once I switched to Mimeo, it was all b&w (and when I reprinted the early issues in Mimeo, the result was all b&w). Later, when I switched to paying a printer to print the issues by offset, color would have been possible, but prohibitively expensive. Nowadays, with color printing available on home computers, the cost for color work has come down considerably, but it’s still expensive enough in equipment and supplies to be too difficult for many. I don’t know of color artwork in ST-zines before T-N, but there may have been some. (I know of some early general sciencefiction fanzines that made use of color – even Mimeo’d examples! [2]

Popularity of the Dorothy-Myfanwy stories – well, Anthony Tollin was impressed by them, and so were most of the readers who commented about them in letters [to T-Negative]. So I’d assume that they were also popular with the readers who didn’t comment on them specifically. That one story’s characterization of Harlan Ellison as unpleasantly sharp-tempered – well, he is, some of the time. A lot of the time he isn’t, and on his good behavior he’s a lot of fun to be around, not to mention being a fine writer. I think most people would agree, in or out of ST fandom. Looking at a couple of websites, I see that some readers nowadays complain that the Dorothy/Myfanwy stories are basically just "Mary Sue" stories. (I don't think I was getting that complaint at the time -- well, the name hadn't been invented yet, so I couldn't have, but the basic complaint could have been made without the term, and I don't think it was.) Technically the group does have the characteristics of "Mary Sue" (the name is from the protagonist of "A Trekkie's Tale," a parody of the type by Paula Smith, from her ST fanzine, "Menagerie," in 1973) stories (the protagonist is a young, beautiful, genius-level woman who resembles the author, and wins the heart of one or another of the main characters, usually Spock, and usually very gooey in tone, representing as they do authorial wish-fulfillment). But I think this group was better than the label would suggest, for its narrative humor and use of interesting world-settings. [3]

An Attempt to File Off The Serial Numbers

Dorothy Jones Heydt, who collaborated with Astrid Anderson on the Dorothy-Myfanwy series of short stories subsequently abandoned her narrative. In the mid-1970s, she attempted to rewrite and expand it as a novel with characters changed and renamed. The manuscript was rejected by publishers as being "too much like Star Trek", and Jones went on to other things.

>...To become canonical, the ST novels would have to influence later works; perhaps by featuring perennial squabbles between a healer and a logician aboard a quasi-military craft.

But if you tried to sell such a novel, it would get bounced as "too much like Star Trek." I know whereof I speak. Long ago in the morning of the world Astrid Anderson and I wrote such a novel. Everyone we showed it to who _wasn't_ an editor loved it. Everyone we showed it to who _was_ an editor said "Too much like Star Trek." So how will the ST novels ever get to be canonical?[4]