Desmond Miles is the modern day protagonist of Ubisoft's first five Assassin's Creed games. He also appears in the French comic series produced by Les Deux Royaumes. He is voiced by Nolan North and his model is based on Canadian model, Francisco Randez.

Desmond Miles was born into the Assassin Order and is a descendant of many famed Assassins such as Altaïr Ibn-La'Ahad, Ezio Auditore da Firenze, Edward Kenway, and Ratonhnhaké:ton. He was born and raised in "the Farm", an Assassin compound in South Dakota, where he had a rocky childhood that is mostly not detailed by the canon. At the age of 16, tired of living in hiding and not believing in the Assassin life, he ran away and hitchhiked across the country until coming to Brooklyn, New York, where he became a bartender in a nightclub named Bad Weather.

In September 2012, Desmond was kidnapped by the Templar organization Abstergo Industries, and became their "Subject 17". This involved being forced into a machine called the Animus to relive the genetic memories of his ancestor, Altaïr Ibn-La'Ahad. It was Abstergo's aim to acquire a map that showed locations of powerful artifacts called "Pieces of Eden" that are spread across the Earth. Following this, he managed to escape Abstergo with the help of Lucy Stillman, an undercover Assassin, and joined up with an Assassin cell in Italy, which consisted of herself, Shaun Hastings and Rebecca Crane.

Desmond then relived the memories of Ezio Auditore da Firenze, in order to improve upon his newly obtained skills. Eventually, with the knowledge gained from Ezio's memories, Desmond and his fellow Assassins obtained the location of Ezio's Apple of Eden, which was located underneath the Colosseum. Though successful in obtaining the artifact, Desmond's body was taken over by Juno, a member of the First Civilization, and was made to stab Lucy after Juno revealed her to be a traitor. Desmond fell into a coma and was placed in the Black Room, the safe mode of the Animus, in an attempt to stabilize his condition. With help from the virtual construct of Clay Kaczmarek, the "Subject 16" of Abstergo's Animus Project, he was able to regain consciousness, and found himself located in New York, with Rebecca, Shaun, and his father, William.

In the Grand Temple, Desmond relived the memories of Haytham Kenway and Ratonhnhaké:ton to find the key to the sanctum containing the device needed to prevent a devastating solar wind. He also undertook field missions to retrieve power sources for the Temple, coming into conflict with Daniel Cross. After his father was captured by Templars, Desmond rescued him from and assassinated Cross and Warren Vidic in the process. After finding the key, Desmond opened the sanctum but discovered he had been misled. It was made known that the device would save the world, but also unleash Juno, who had been imprisoned because of her hatred for humanity. Using the device would also claim Desmond's life. Regardless, Desmond chose to sacrifice himself for humanity's survival, while expressing faith that his fellow Assassins would find a way to stop the new threat.

According to his voice actor Nolan North, the original plan for Desmond's story was that he would appear in six games, using the Animus to acquire the skills of each of his ancestors. By the last game, he would have eventually become "the ultimate Assassin" and be able to time travel back and forth into different eras[1].

Aside from Assassin's Creed: Revelations and Assassin's Creed IV: Black Flag showing some brief glimpses into Desmond's backstory, there is little canon material showing his life prior to the games. Much of it is based on fan speculation. Some fans view William as abusive to him, based on their interactions in Assassin's Creed III.

Despite Desmond's sacrifice in AC3, plenty of fanwork centers around him coming back to life through different means, or surviving in the Grey in the same manner as Clay Kaczmarek. One fan comic showed Wrench (from another Ubisoft franchise Watch Dogs) downloading Desmond's consciousness onto a Tamagotchi. Other fanworks run with the idea of Desmond surviving with a burnt arm, such as the fanfic To Love A Stray by d_e_s and tumblr askblog clay16kaczmarek.

A common basis for fics is Desmond being transported to another place/time/universe when he touches the Eye; which has been used for many crossovers and fix-it AUs.

Fan reactions to Desmond are mixed. Several players found him uninteresting to play as[2] and lacking as a character[3].

I quite like him, I think the problem stems from the generally boring gameplay in the majority of AC games when you do control him. […] I think that all he needs is a game that elaborates on his story more.[4] 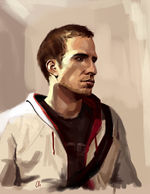 However most fans seem to love Desmond's character, with many people, including critics who disliked him, stating that his death was a bad move on Ubisoft's part.

Before Ubisoft decided to kill him off in what some fans still think was one of the worst decisions that has ever been made within the series’ storyline, Desmond Miles was the star of the Assassin’s Creed franchise.[5]

what she says: i'm fine.

what she means: i played 4 fuckin games thinking that by the end of it desmond miles would be this unstoppable badass assassin who would single handedly save the world and turn the tide against abstergo - i thought i would get an amazing modern game where we get to jump off skyscrapers and infiltrate businesses and government buildings in abstergo's pocket and walk around hacking computers and stabbing people and then taking a nap in the animus so we could play as anscestors but noooOOOOooooooOooOoO they had to go and fuckin kill him like i didn't just spend the last 4 games getting emotionally invested in a sarcastic piece of shit bartender i cAN'T BELI E VE[6]

I once asked a friend of mine about how they feel about Desmond and she said he was boring, but still misses him as much as we all do. Even the people who didn’t get excited about Desmond miss him, like whoa, Ubisoft, if that isn’t a sign to bring him back then I sure as hell don’t know what to tell you.[7]

I was really looking forward to seeing how they advance Desmonds story. Then that happens at the end. A pointless journey across 5 games only to be killed off like that without ever doing something worthwhile.[8]

The general consensus about Desmond Miles is that he was an entertaining, yet underutilized, character.

In October 2015, it was revealed that Desmond had a son with an unnamed woman, when he lived in New York. The child, born in 2005, was taken ten years later to an Abstergo clinic, where his patrilineal lineage was discovered[9]. Fan reactions to the character have been mixed, with some fans being excited and other denouncing the idea, claiming it's overused in stories.

#and of course he has the same lip scar #you know ubisoft could have just #not killed desmond??? #and desmond could be in his own comics as opposed to #this bullshit son of his that ubisoft pulled out of their ass #u kno just saying (via @fanciestdesmondstache)[10]

In the 2018 "Uprising" comic arc, the son's name was revealed to be Elijah.

Additionally, the Desmond/Lucy/Shaun/Rebecca foursome is somewhat popular in AO3.