Askblogs are a form of Tumblr blog that responds to questions. They are often used for roleplay for fanartists on Tumblr. People leave questions in the blog's ask box, and the blogger will reply. For roleplay, they will usually reply in-character. Though not as numerous as the fanart-based ones, there are some roleplay blogs that are all text.

Askblogs have become popular on Tumblr in recent years, but the concept may have been originated by the Ask Captain Jack[2] account on LiveJournal back in 2008.

The most common and "default" type of askblog.

Cosplay askblogs reply with photos or gifs of mod in character, often accompanied by text.

Voice askblogs involve a person voice-acting in character. These blogs utilize tumblr's audio post feature and rarely use much text or images. 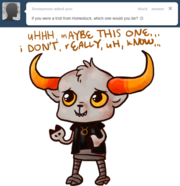 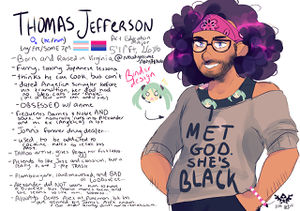