Weeaboo is English-language slang used to refer to fans of Japanese culture and media, such as anime and manga. It typically refers to people of non-Asian descent. The word is considered derogatory in some contexts, but in other contexts is a neutral or positive descriptor, with self-confessed anime fanatics or Japanophiles adopting it as an affectionate term towards themselves or their friends. The shortened version "weeb" is used similarly. 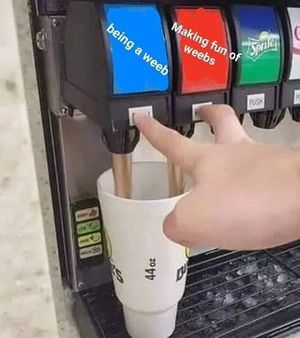 A meme demonstrating that one can both be a weeb and also make fun of weebs.

The word indirectly came from "wapanese" (wannabe Japanese), an insult used to describe white Japanophiles. When increased usage of the word led to several heated disagreements on 4chan between anime/manga fans and everyone else, the moderators created a word filter that replaced every instance of the word "wapanese" with "weeaboo." Subsequently 4chan users adopted it in place of wapanese, and the usage has then since spread out to the internet at large.

"Weeaboo" comes from a Perry Bible Fellowship comic strip. In the nonsensical strip, a corporate manager complains that the employees have been wasting too much time on "weeaboo". An employee responds "Did someone just say 'Weeaboo?'", and following this, the whole group of employees take out paddles and spank the manager while chanting "WEE-A-BOO! WEE-A-BOO!"[1]