Banned in Anaheim is a 1985 essay by Della Van Hise. 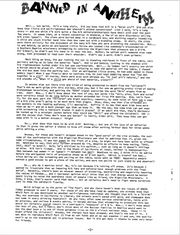 It was printed as the editorial of Naked Times #6 and discussed, among other things, something that happened at a Creation Con in Anaheim, California that took place March 3 and 4.

A similar incident a few years earlier was Banned from Tulsa.

Well... not quite. It's a long story. Did you know that K/S is a "moral sin"? Did you also know that little old self-righteous men shouldn't attend conventions? Like I said, it's a long story — and one which I'm sure quite a few K/S editors/enthusiasts have dealt with over the past few years. It seems that, at a recent convention in Anaheim, a few of us were discreetly selling K/S zines (gasp!). The zines were buried deep in a cardboard box, and anything vaguely resembling a child who stuck his/her hand into that box came out with a bleeding stump. In short, the zines were there strictly for the enjoyment of the many K/S fans who were attending the convention.

But... lo and behold, up walks an antiquated little fellow who looked like somebody's misconception of a Southern Baptist missionary attempting to convince the Rigellians that pleasure was a S-I-N. For himself, he didn't put his hand in or near the box. Rather, he waited until someone else came along, then proceeded to read over their shoulder. Didn't say a word. Didn't even grimace.

Next thing we know, the guy running the con is standing red-faced in front of the table, very politely asking us to take the material "away". And lo and behold. Lurking in the shadows with his righteousness tucked under his hat was you-know-who. Well... my temper isn't exactly one which a Vulcan would be proud of. After flat-ass refusing to take the material off the table, I chased the old boy down into the parking lot. (For an antiquated little prune, he had some speed in those wobbly legs!) When I was finally able to confront him, he just kept babbling about how "two men together is a sin!" Of course, there were also such phrases as, "It just ain't natural," and the old standby of, "What if a chiId got ahoLd of that material, sister?!"

Is anyone else out there sick and tired of being protected to death from the "children"? That's not my main gripe with this old boy, mind you, but I for one am getting pretty tired of seeing Disneyesque television, and getting the "Shhh" signal everytime the word "Shit" erupts from my lips. Jeez! Now... I don't know about the rest of you, but words like "shit, piss, fuck and screw" were certainly known to me long before my mother attended her first PTA meeting.

And, let's face it, for the most part the "children" who might possibly, remotely, by some twist of fate see a copy of a K/S zine aren't going to do much more than giggle. Okay, okay, now that I've offended all the mothers in the reading audience, I'll apologize. Suffice it to say that most kids know more than we do — and at a much younger age than we knew it. (By the way, how come kids can get away with screeching like a red-alert klaxon in public places? If an adult did that, they'd obviously be locked up in a straight jacket before they could say "Shit!" and offend the children!) (Oh — and the excuse that "they don't know any better" is (sorry, kids) shit. They know they can get away with it is a better excuse.) *Sigh*

So... what does that have to do with K/S? Nothing... but one of the joys of an editorial IS that it gives the editor a chance to blow off steam after working 16-hour days for three weeks while editing a zine.

Anyway, for those who haven't skipped ahead to the "good parts" of the zine already, the outcome of the confrontation with the Rigellian Missionary was that he admitted that if, given the same circumstances, it was two women on the front of a zine, he might not have been quite so offended. Needless to say, that only further aroused my ire, despite my efforts to keep saying, "IDIC, IDIC, IDIC" to myself. Sure, he's entitled to his opinion just as long as it doesn't infringe on mine. K/S isn't illegal. And in the State of California at least, neither is homosexuality. (Not between two women — or (gasp!) — between two men!) Needless to say, I think it'll be awhile before the antiquated relic of prejudice shows up at a con again. (Which is kind of too bad... since during all the screaming and yelling at the table, sales went up 100%! Apparently people wanted a good excuse to get a piece of the action, and were too polite to just stand by and observe!)

So... why do I mention this? No, it's not because I'm letting off steam. It's because I wanted to illustrate that we (meaning K/S fans and editors) have enough problems with the "real world". Recently, there's been an unusual amount of bickering, back-biting and negativity haunting the realms of fandom... and I (personal opinion only) think that all that energy would be better spent trying to raise the awareness level of people like my friend, the Rigellian Missionary. I know, I know, that's easier said than done— but we certainly don't need to fight among ourselves just to keep the adrenalin flowing.

Which brings us to the point of "The Past", and why there haven't been any issues of NAKED TIMES produced in over 3 years. For those of you who have read my updates, you already know that NT4/5 Part II was destroyed by another self-righteous individual who thought that K/S is a "S-I-N!" (No, not everyone in California is liberal, the streets aren't paved with gold, and champagne does not come in every drinking fountain!) At any rate, after some serious consideration, talks with my attorney, and various & sundry advice, it became obvious that attempting to prosecute this man [1] would (or certainly could) result in a semi-public "exposure" of K & S. Now... I don't know about the rest of you, but I really don't think most of the Nuclear Families in America would want to see the dear boys a la one of those gorgeous illos on the 6 o'clock national news. (Gasp — it might offend the children!) Anyway, the charges have been dropped, and that's the end of it. I was able to reproduce NT4/5 Part II from my own funds and at my own expense — and yes, the quality wasn't up to the standards set in previous issues. But it did get done — thanks to some very helpful friends.

In 1987, Van Hise commented on on "Banned in Anaheim", as well as the positive effects of having slash and Kirk/Spock fanworks exposed to a larger audience, citing a 1986 article published in the L.A. Weekly called Sigh-Fi:

As to how the L.A. WEEKLY article has affected PON FARR PRESS, I can only say at this point that zine sales and inquiries have increased dramatically. Since several of us here in Southern California do sci-fi conventions in the L.A. area, we have been asked, "Is this that stuff we read about in the paper?" Mostly, the reaction from the public is one of curiosity without hostility. Of course, there are the exceptions to that rule when one encounters an overly-zealous, morally self-righteous s.o.b. (for details, see the editorial, BANNED IN ANAHEIM, which appeared in NT#6;. Additionally, when we attended a convention in Denver (STAR CON) back in March of this year [1987], we were exposed to several people who had read a similar- — though less "critical" — article which appeared in a Denver newspaper. [2]Again, the reaction was one of curiosity mingled with a little disbelief. It's interesting to note that several of these newcomers are now ordering regularly — and some of them are men (yes, that is a rarity in K/S writers and readers alike). So, as to the reaction, it's been more positive than negative. It seems that the article merely "confirmed" what a lot of people had already thought of on their own. While I don't agree with the less than discretionary manner in which the L.A. WEEKLY article was done, it's primary impact seems to be that it's led a lot of new folks into K/S fandom."[3]