Alice/Robin (known as Curious Archer or Mad Archer, among others) is the femslash ship between Alice Jones and Robin Mills from the seventh season of the TV series Once Upon A Time.

The pairing seemed to be largely praised by both critics and fans,[1][2] and will frequently make people's lists of best or favourite ships in the show.[3][4][5][6] Some fans have deemed them to be OTPs more broadly.[7]

The attempt at representation of a queer relationship in the show in the form of Alice and Robin was much better received than the two previous attempts involving Ruby Lucas/Dorothy Gale and Mulan. The incorporation of mental health issues, with particular emphasis on the 'good days and bad days' talk in the bar, was also largely well received,[8] though criticism has been directed towards some scenes with Alice earlier in the season, before Robin appeared. QueerCultureChats released an article relating to the mental health representation within the pairing:

Seeing a positive representation of mental illness in a relationship between two women is the queer content that we need to see. It sends an incredibly powerful message: just because you have a mental illness does not mean you are not worthy of love. It illustrates that love is not the cure to your aliments but it can be such a comfort during the bad days. It’s not always easy but people are capable of loving you exactly as you are.

Thank you, Once. You’ve created a beautiful, multifaceted love story that has become one of my favorites.

Praise for the pairing has also reached the actors behind the characters in fan interactions:

Tiera Skovbye: There’s been a couple moments where they’ll be like, to me and Rose, “Thank you for being the lesbian couple on the show,” and like, “Thank you for taking that on. Thank you for giving us that character and that love story, because it’s not often done.” It’s getting more normal and more done on TV, but I think for this show, for them to see that and for people to respond so well to it, and to love our love story so much, has been just so cool. I love it so much, just to know that other people love it just as much is really cool.

There seems to be a general tendancy within the CA fandom to favour Alice over Robin, often due to greater audience relatability to the former,[11][12] and likely partly influenced by Alice having more screentime overall than Robin.

Curious Archer and Mad Archer appear to be the most popular ship name for the pairing, though at one time, earlier on in the ship's history, several ship names were considered and bandied about. Among them were: RabbitBow, BunnyHood, WonderBow and WonderHood etc. Some of the earliest suggestions appear to be: Peanut Rook, Wicked Rook and Archer Rabbit.[13][14] Most of these names have fallen out of use, though some fans will still use them, and older Tumblr posts and fanworks may refer to the ship using these names. Whether a fan will use 'Mad' or 'Curious' seems to depend on several factors, including fan group/clique/community, website, when they became a fan etc.

The Mad/Curious divide seems to have come about due to a few reasons:

As OUAT has only been off the air since 2018, the longevity of the CA fandom still remains to be seen. The fandom has somewhat dwindled since the show ended, relatively speaking when compared to coverage at the time, with the absence of new canon content leading to some fans moving elsewhere. However fans of the ship very much still exist, with new fans coming in after finishing the show for the first time, and old fans flitting in every now and again.

Communities of fans will congregate on places like Tumblr, Twitter, Instagram and Discord, and though posts are sometimes scarce, discussions and fanworks will still come about. Small pockets of fans are still surviving and coming together out of love for the ship.

Desire for a spinoff centred on the ship appeared to be fairly common, particularly just after the show itself ended, to the extent it was noticed by at least one of the showrunners, Edward Kitsis, on Twitter[15]:

What I will say is we loved those two and I see people on Twitter saying, “Spin-off!” and I’d watch that. I think those two are fantastic. So I do wish we could explore more. If you see the way we did it this year, it was very much in the Snow-Charming [romance], the very slow burn of really watching the love story come together. So I think there was much more happiness and story to be told with them, but that’s what the ending is about — we did our version, but these stories continue. A fairy tale was always something that was passed from village to village, so now Robin and Alice belong to the Oncers and the fandom, and they’ll live on in fanfic and in everyone’s mind. We’re done telling our side of the story. Now the characters belong to Oncers and they should go out and play with them.

Comparisons Between Other OUAT Ships

The ships Curious Archer appears to be most commonly compared to are Snowing and Swan Queen. The former for, among other things, the fact that one of the individuals in each ship trapped the other in some way soon after meeting, and the similarities between CA's "We'll always know each other" and Snowing's "I'll always find you" quotes. Swan Queen comparisons seem to revolve around the two couples' time spent in Emma's iconic yellow bug. 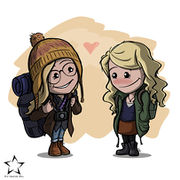 Regarding Canon Compliant fanworks and headcanons, there are three periods of time in which the pairing are explored within:

Though a wedding was never seen onscreen, the inclusion of Robin asking Wish!Killian for his blessing to marry Alice has lead many fans to consistently describe them as wives.

As often happens, the actors themselves will often answer questions relating to their characters. Fanworks and discussions will sometimes arise based on some of these answers. 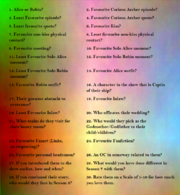 Other Things of Note

A few quotes are often taken by fans as (presumably) unintentional innuendo, specifically "You came?" "Of course I came." just before the curse hits, and Alice's excited "Do me next!" in the cell.