Twist and Shout is a Supernatural Dean/Castiel AU novel written by the authors gabriel and standbyme, also known as discover and trunkcoats on Livejournal. It was originally posted on LiveJournal for the 2012 Dean/Castiel Big Bang.[1] This fic is widely known in Supernatural fandom, and it is often recced as a "must read" for fans of the Destiel pairing. It's popularity spawned it's own fandom, inspiring numerous fanworks. As of April 2021, the story has over 126,000 hits, 35,000 kudos, 5200 comments and 8100 bookmarks on Archive of Our Own.

What begins as a transforming love between Dean Winchester and Castiel Novak in the summer of 1965 quickly derails into something far more tumultuous when Dean is drafted in the Vietnam War. Though the two both voice their relationship is one where saying goodbye is never a real truth, their story becomes fraught with the tragedy of circumstance. In an era where homosexuality was especially vulnerable, Twist and Shout is the story of the love transcending time, returning over and over in its many forms, as faithful as the sea.

Oh man, so what started out as just a just a few ideas, turned into this monster of a fic. The whole idea of this thing actually came from a scene from a horror movie called "The Ward" that Hannah and I had watched together, and we had thrown some ideas around and had planned to write it at some point, but when neither of us were getting any where with our original fics, we decided to join our forces and write Twist and Shout. Also, our beta, komodobits, is the best for going through and fixing all of our mistakes, probably while crying. We love you, Martha! And our artist howlandbird, whose art is beautiful and really brings the story to life! I also want to say thank you to everyone who supported us while writing this!

The following situations and characters are a work of fiction. Any similarities between real or actual events or people is purely coincidental and are in no way intended to offend or appropriate the subjects they have adapted to these particular circumstances.

Readers may encounter some ideologically sensitive material such as homophobia, depression, drug use, alcoholism, PTSD, warfare, violence, and terminal illness!

In November 2016 the authors announced plans to publish the story. It is unclear whether this publication would be original fic or as fanfic in published format (presumably the former):

we will be making the fic available as a full novel for purchase within the next few weeks/months. what we’re asking right now is for your support. that same support you’ve given the fic so far. we know many of you have been asking for this for a long time, so we are hoping that your excitement remains!

for now, please pass this post around to as many sources as you can. it is important, also, for people to know with publication comes the chore of scrubbing and erasing the fic from the internet as much as we can to avoid any legal troubles. if you have a pdf of the fic we ask that you do not post it to the internet anymore. please tell your friends this. we are hoping that the novelization will lead to response as much as the fic.

raven and i are going to work very hard to keep the integrity of the fic intact while still making enough changes that it is viable! it will still be the story you love, with a bit of a makeover[2]

The fanfic was previously published twice on via Lulu Press, a print-on-demand website. For the second publication (March 2017) the book had a plain black cover with a perfect bound trade size paperback and contained 658 pages. It was credited to "Gabriel and StandByMe". The first publication (2015) was reviewed by the mother of a teenage Supernatural fan:

".... when it comes to fanfiction, writers of such stories don't care about that. If they want Dean and Cas together, then they'll find a way to get them together! One particular writer, writing under a pseudonym, did just that: He put Dean and Cas in an alternate universe, where Cas is human....When my daughter pleaded to me to buy her the Supernatural fanfic novel, Twist and Shout by Gabriel StandByMe (like I said, pseudonym), she encouraged me to read it.....My daughter told me she died a thousand deaths while reading this book (and of course that's going to happen with a Supernatural story!), so I was prepared for some serious heart-wrenching moments.....I loved this story. It's a good book. Despite the many editing mistakes, this book was definitely hard to put down, but mostly because I love Supernatural so much. More Dean and Sam! Yay! .... I couldn't get over how cute Cas and Dean are together. They really love each other and that love is very strong....I really enjoyed reading this novel, even though the tragic ending had me in tears at the end. I didn't die a thousand deaths while reading it, though. Actually, I went on an emotional roller coaster."[3] 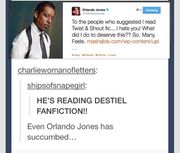 The story has even reached beyond fandom. This is a tweet from Orlando Jones of Sleepy Hollow after reading the story based on fan recommendations.

Twist and Shout has become one of the most famous works of fanfiction in the Destiel fandom, with tons of fanart, fanvideos, and comments expressing emotional distress caused by this fanfiction spanning sites from Tumblr to Youtube, and even to Goodreads.[5] It has created its own underground following, and most people in the Destiel fandom recognize its name even if they themselves have not read it. 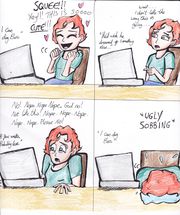 Fancomic by chip93 showing a fan's reaction to reading this fic

The fic received a callout from actor Orlando Jones of Sleepy Hollow on 24 Feb 2014: "To the people who suggested I read Twist & Shout fic....I hate you! What did I do to deserve this?? So. Many. Feels." [9]

Fans have also advocated for a mention of the fic on the Wikipedia page for the song Twist and Shout.[10]

Fans have voted on their favorite quotes at Goodreads which can be read here., Archived version

Fans have pulled together lists of other fanfic to read to help recover from the effects of reading Twist and Shout. one such list is here., Archived version

Have you ever wanted to read a book guaranteed to make you want to punch a wall multiple times? Do you want to read a book with a great plot and an incredible amount of work put in to it? Or do you just want to understand all the inside jokes? Then this is the book for you.

Let's face it, there are a lot of books that are way better. I personally would not have respected or loved this book so much if I hadn't known that thousands of fans were going through the same pain I was. You can most definitely find a book that's better than this one and more engaging, but you will never find a book that will leave you with such a strong feeling of camaraderie to your fellow Destiel lovers.

This book may feel drawn out and way too long at some points, but at the end of the day, one incredible plot and thousands of inside jokes later, you will leave Twist and Shout feeling like you should never go to the beach or touch a glass of milk again.[11]

You know…I think it is fucked up that the same two people can be capable of writing amazing and not over the top fluff that has you grinning from ear to ear (and awesome sex scenes) and also be sadistic bastards and write some of the most gut-wrenching stuff as well. Fuck this story. It’s beautiful and had me almost crying for ~30% of the time and full out crying an additional 20%. But, it’s a good burn. Bittersweet. But a life ruiner. I don’t remember the last time I cried this much. Fuck you, story. Fuck you. Oh, and fyi…the summary doesn’t do it any justice. Yes, it is sad. But it’s a good sad, you know? But have some fluff queued up for once you finish this story. Holy damn, it was a good story though. (Not just from a Dean/Cas perspective…just a good fucking story.)[12]

Seriously: Don’t read it if you are not prepared for a fic which builds a beautiful world for the sake of tearing it apart until there is nothing left.[13]

Anyway, just all that coupled with the way it’s written… It’s the most tragic piece of writing I have read in my entire life.

If you’re not a fan of Supernatural I’m sure the story will still make sense to you, because it’s in no way canon aligned (unless you consider it a distorted sort of endverse/purgatory sort thing but idk)

I only reccomend this fic to you if you really enjoy crying a lot and being sad. Like I said, I hardly ever cry from a story. The only time I even came close to crying as hard as I cried while reading twist and shout was at the end of the hunger games when that bad thing happens to that one person and also during the end credits. But shit, I actually have such a strong emotional reaction to twist and shout. Sometimes just thinking about it gives me an ache in my chest. [14]

This will make you cry. Like a lot. Cas is adorable and Dean has a motorcycle in the 60s. They listen to vinyls. I am soft.

Can you tell i am a sucker for historical settings yet? It’s so well written and if you enjoy angst please just go off and cuddle up with tissues cuz you’ll need them.

Reading this is almost a rite of passage honestly hahahah[15]

I read this and hated it by the end. It wasn't because of the story, but because I was reading an AU with not one recognisable character. All the names in the story could be changed and it wouldn't make a scrap of difference.[17]

I read the Destiel au fic 'Twist and Shout' and by the time I finished it, I didn't like it at all. While most of the story was alright, the characterisations were so off, two guys from any fandom could have been dropped into the lead roles, tweaks for hair colour & height, and no one would have been any the wiser. I wouldn't admit this unanon because this is the go-to fic for long angsty Destiel.[18]

Fanworks Inspired By The Story

In 2014, the fan artist petite madame created a series of ballpoint pen drawings that she assembled into a unique fold out book. Samples can be seen below - the full set of images can be found here., Archived version

"In the series, “I have strange fandom project ideas”, here is the fic Twist and Shout by Discover and Trunkcoats summed up on a 135 cm (53.1") paper scroll and folded into a cute sketchbook. I used only two black ballpoint pens, a mechanical pencil (for construction lines) and a sepia Prismacolor pencil (PC943 Ocre Brûlée) - And just a couple of drops of red ink for the blood. You can see on the photo set above the various parts of the sketchbook before it was assembled (Photo 7) and the drawing before it was folded (Photo 8). I’m very happy because I managed to scan it."

A search for the story on deviantart also resulted in numerous fanworks which can be seen here.

Numerous gifsets and graphics have been posted by fans on tumblr. in addition, a tumblr named "twist and shout feels" was created and can be viewed here., Archived version Selected samples from tumblr are below.

As of February 2019, 76 fanworks have been inspired by the story and are posted at AO3. They can be found here., Archived version Examples posted before April 2015:

There are numerous fanvids and fan reviews available on Youtubne and Vimeo. below is a random selection.