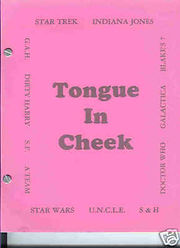 Tongue in Cheek is a multifandom anthology featuring both het and slash. It was published in May 1984 and contains 163 pages.

It is a sister zine to Diverse Dimensions.

Why did I ever agree to do this sine? I've spent the last two years driving myself and everyone around me up the wall. What started out as a possibility became an actuality, and my life will never be the same again. I think I shall quietly excuse myself now and reserve my room at the State Funny Farm.

Enough nonsense! I did enjoy putting this baby together, in spite of the hassles My heartfelt thanks to all the authors/artists who stuck with me through the creation to the finish. Each of the contributors represented here can be justly proud of their work. I personally found no "weak limb" in the entire selection (and I'm the world's pickiest critic on these things!). I know that you the reader will also appreciate the quality and high standard of workmanship. They all deserve a large round of applause.

To my friends; how did you ever stand me? Reading at all hours, opinions and critiques, suggestions or just plain grousing — you took it all and came back for more. Jeannie, Mary Jo, Karen, Ruth, Roberta, Jean, Ro, Cathy and Carole: this is your zine as much as mine. They" said it could never be done, and we've proven them wrong.

My name is Lady Sabra Dreego of Malthiaka. My home planet succumbed to Imperial rule shortly before my 'exile' here, I being one of the 'surrender tokens'. I was but fifteen when my father decided I, from six other sisters, was most suited for the journey. Ranting and raving did not change his decision one whit; in fact, I think it was his way of ridding him self of a rebellious daughter. I was insistent we continue to fight the Empire, to join the Alliance, even if it were only secretly. Father was a meek little toad, more willing to bend and submit than stand up against the tyranny of that self-imposed ruler, Palpatine.

The thought of never being allowed exit from the apartments and women's wing appalled me. I had always been allowed my freedom, so even after the door slammed shut behind me I began plotting ways of escape.

[zine]: Tongue in Cheek: the zine that almost didn't get out... due to enragement over some sort of screw up in the ad. Maybe I misread it...but I sort of thought $3 was the price of the zine. Really low, I know, but there was nothing said about a deposit, so it came as somewhat of a shock to find I still owed $11.75 on it. Still when ya gotta have a fix. The zine is pretty good tho it gets off to a rather slow start...in my opinion. I never even saw BLAKE'S 7 yet the story worked for me. Others did not. IN SUNSHINE OR IN SHADOW was one of the reasons I bought this zine, 'cause I always wondered if there wasn't something going'on with Steve and Danny... There are some good stores here, and it's worth the price. [1]

[In Sunlight or in Shadow]: McGarret, in a moment of weakness, admits to himself that he has feelings for Danno. He drives Danno home and struggles against his feelings.... This is the only slash I've seen for original Hawaii Five-O and I enjoyed the novelty of it. The idea of the stiffly upright (you'll pardon the pun) McGarret giving way to feelings for Danno was compelling, which makes up for the fact that this is a very ordinary story in a lot of ways. [Note: I found this story at The Android's Dungeon a UK fandom slash site. The following remarks appear with the link to "In Sunlight And In Shadow":

"The only known outing of this story was in a zine called ‘Tongue in Cheek’ printed by Dobie Cat Press of Parkersburg, West Virginia, in 1984. Having entirely failed to make any contact with the copyright holder, I have bitten the bullet and included this story on The Android's Dungeon simply because I feel it is too good not to share."

I haven't found the story anywhere else on the web.] [2]