The Return of the Rest of the Garbage

The Return of the Rest of the Garbage is an adult het and slash 222-page anthology by various authors. It has art by Z.P. Florian and Zyene. 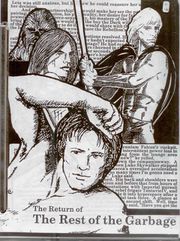 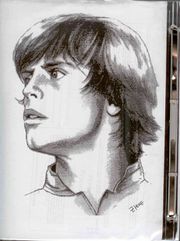 Statement on the Frontispiece

This is the third Rest of the Garbage. When the first one was published, it was almost unthinkable that zines like this could exist. Now, the whole SW fandom is far more diverse thanks to new and imaginative zines, to mention just a few, like Smelly, Renaissance, Elusive Lover, Dark Master Dark Servant. We are now looking forward to a new era in SW, the time of the prequels. By the time you read this, we all know what it is about. Still, I think, the alternate universe playground of the fanlit will remain open. I hope so. Even after we have learned what we had learned in TESB, Nowakowska's Thousandworld was still a magnificent read. Going by this, I'm offering this unabashed version of the Anakin pix that was published in color in Tremor 10, for all those who liked Anakin tall, dark, mysterious and a lot of other things.

Statement on the Title Page

Garbage has never been an elegantly laid out zine. It always had the handmade quality of an artfully laid out mess. I could say that it is by design to bring you the organic new age touch of a handcrafted book , but that wouldn't fool you, huh? The truth is that I can't do better than this.

See reactions and reviews for By Any Demon's Name.