The Big 3 Manga is English-language anime/manga fandom shorthand for referring to the three largest Weekly Shounen Jump titles. The term is generally used only by English-language fandom although some fans have noted that Japanese lurkers on 2ch know what it means and have begun to use it in Japanese fandom. Some fans also use the term, Holy Shounen Trinity (or HST), to refer to the Big 3, although HST is meant to refer to currently running shounen titles rather than series that have been completed.

The Big 3 were One Piece, Naruto and Bleach, beginning in 2004[1]—thus, some consider "the Big 3" to refer to only those three series and the 2000s period of animanga fandom. However, the stability of the trinity shifted around when Naruto ended in 2014. Bleach's fanbase was diminished by the time manga ended in 2016.

Currently, One Piece is still considered to be the #1 of the Big 3, and shows no sign of leaving. Boku No Hero Academia has quickly risen to be one of the most popular current series. The third is more debated[2]—Naruto sequel series Boruto[3], Fairy Tail, Black Clover,[4] and Haikyuu!! are some that are frequently discussed. However, it is generally agreed that shounen manga is no longer as homogenous as it once was, and that there are no longer three common gateways to animanga fandom.

The Concept of Big 3

Fan comparison of the art styles of the current "Big 3" shounen manga.

Many fans point out that the idea of a "Big 3" is false because the gap in rankings and sales between One Piece and Naruto, and then Naruto and Bleach are usually very large. Often times, Bleach ranks much lower than the top 3 in the weekly polls conducted by Weekly Shounen Jump. Other fans, however, say that while that may be true in Japan, when talked about in an international context, the discrepancies change since One Piece is often not the most popular of the three, as is in the case of North America.[5] Nevertheless, many One Piece fans jokingly reference the wide gap in Japanese sales rankings:

Eiichiro Oda, the creator of One Piece, was asked how it felt to be a part of the Big 3 of Shounen Jump. When asked, he replied, "Big 3? Who're the other two?"[6]

Some fans have wondered if a manga series not serialized in Weekly Shounen Jump could ever become one of the Big 3. Many fans agree that a title serialized in monthly installments could not due to a lower publication frequency, which encourages less fan discussion from week to week. It has been suggested that a Big 3 title could come from Weekly Shounen Magazine, which is Weekly Shounen Jump's closest rival. In this case, the most often cited candidate tends to be Fairy Tail.

Some fans have pointed out that other Big 3s have existed in the past. In the early 90s, the Big 3 was said to have been Dragon Ball, Slam Dunk, and Yuu Yuu Hakusho. This era is thought of by many people as the Golden Age of Weekly Shounen Jump, when its circulation was at its peak. A few fans have said that One Piece, Rurouni Kenshin, and Hunter x Hunter were the Big 3 of the late 90s. Most people admit though that no other three titles have dominated for as long as the current Big 3.

Criticisms of the Big 3 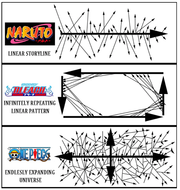 Fan comparison of the storytelling techniques of the current "Big 3" shounen manga.

Bleach's place in the Big 3 began to be debated due, by general opinion, a drop in quality, and subsequent drop in popularity in the 2010s. The manga began to sink down the weekly rankings[7]. In 2010, it was ranked #5 in sales, coming behind Kimi ni Todoke, a shoujo manga serialized monthly, and Fairy Tail.[8] In 2011, it slipped even further to #8[9] and then to #12 in 2012[10]. In 2015, Bleach hit last place in the rankings. Fans often speculate about the reasons Bleach continued serialization even though its performance is no longer as strong as in previous years and wonder if the Weekly Shounen Jump editors simply won't let Kubo Tite end the series. Others think that "it seems kinda sad to see a series that once did so well crashing and burning like this." [7]

Bleach ultimately ended extremely abruptly, with many fans disappointed by the lack of resolution of major plotlines. Many have speculated that Bleach's diminished popularity finally led to its cancellation and hasty wrap-up.

As a result of Bleach's decline, some fans of Naruto and One Piece took to poking fun at the other title's supposed flaws, implying various reasons why the series was sliding down the ranks. Some fans point out that the other two titles are not without their own flaws. Many readers say they refuse to read One Piece because they find the art style off-putting and the premise of a boy with a rubber body childish. Some readers criticize Naruto for the treatment of its female characters.