Slam Dunk is a completed shounen manga series by Inoue Takehiko that was originally serialized in Weekly Shounen Jump.

The story follows Hanamichi Sakuragi, a gang leader and the school's "bad boy", who has no luck with the ladies. After receiving his 50th rejection he quickly recovers when pretty Haruko Akagi crosses his way. She is the first girl not scared of his looks and instead chats with him carefree and friendly. To impress her, Hanamichi joins the school's basketball team, led by Haruko's older brother. However, he soon finds out that despite having talent, there is more needed to succeed - especially when faced with Rukawa Kaede, the team's star rookie, object of desire for many school girls (including Haruko) and Hanamichi's instant rival... 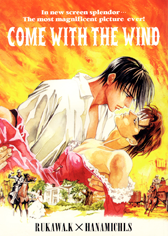 Slam Dunk had a very active doujinshi scene. Yamane Ayano, who later came to fame with her Finder Series, gathered her first yaoi fans with several well received SD doujinshi, such as Come with the Wind.