Suez Canal Obstruction is an overnight fandom of anthropomorfics and memes that started on March 23, 2021, when the cargo ship Ever Given, one of the largest container ships in the world, got stuck sideways in the Suez Canal, thereby completely obstructing the canal and preventing any vessels from passing through.

The subject trended at Number 2 on Tumblr after an influx of memes and posts were created addressing it. Some pointed out the humour in seeing an actual ship trend for a change, rather than a fandom ship:

Maybe you think a ship is problematic, but ask yourself this: is it wedged sideways in the suez canal disrupting 12% of global maritime trade? [2]


We are here for any kind of shipping as long as it’s problematic.[3]

Discussions and memes about the Suez Canal obstruction exploded across various online groups, some affiliated with various types of fandom, some not. This has, of course, warranted speculation about the popularity. As one tumblr user speculates, "they say disasters really bring people together and here’s one that doesn’t actually involve the death of anyone."[4]

Within fandoms, there have been various ways of responding to the Suez Canal obstruction. Media Fandom and RPF fandom have largely turned towards shipping with a side of shitposting. Abour 100 works were posted in the Ever Given Container Ship/Suez Canal AO3 tag in the initial week of the incident, and the fandom was nominated for the Yuletide 2021 exchange, in which two works were written. Stories continued to be posted after the obstruction was cleared, although at a much slower rate.

Video game fandom (particularly on Reddit) has also used it as an opportunity for fannish memes about how to get Ever Given unstuck.[5]

The Suez Canal debacle also intersected perfectly with the ongoing popularity of sea shanties, a phenomenon that began in 2020, and various fans wrote and recorded shanties about the situation, generally set to the tunes of existing popular sea shanties (refer to Filk & Fan Songs for examples).

During and after the actual Suez Canal blockage, fans took delight in tracking other transportation mishaps related to Evergreen Marine Corp. [6][7] The boat remained current in the popular consciousness and was mixed with other memes that arose later in 2021, such as the horse plinko meme.[8]

Almost exactly one year after the Suez Canal Blockage, Ever Given's sister ship Ever Forward ran aground in the Chesapeake Bay. Tumblr took a similar level of interest in this story in the spirit of a one-year anniversary of the Suez/Ever Given fandom. [9] 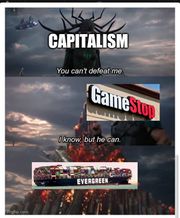 A meme referencing Thor: Ragnarok, capitalism, the Suez Canal Obstruction and the GameStop/Wall Street saga. By mythgenderedloki on Tumblr.