Tingle has a cult following of fans, partly due to his uniquely bizarre writing style (Aja Romano has speculated that his works are "tongue-in-cheek satires of real kink-driven fiction on Amazon"[1]) and subject matter, and partly due to his unabashed satirising of conservative politics and political figures, as well as the generally wholesome attitude he promotes towards life, love, and self-acceptance. He attained even greater fame after a campaign by a group of sci-fi fans known as the Rabid Puppies resulted in his short story Space Raptor Butt Invasion being nominated for a Hugo Award.

Chuck Tingle fans (and anyone the author feels positively towards) are affectionately known as "Buckaroos". 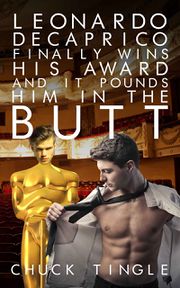 It can be argued that many of Chuck Tingle's works are fanworks or transformative works, particularly those which incorporate current events, or even works by the author himself. Several stop just shy of being Real Person Fiction, such as the works involving "Domald Tromp" and "Leonardo Decaprico".

In the wake of the Archive of Our Own becoming a Hugo Award finalist, Tingle made some wholeheartedly supportive comments on Twitter, as a counter to the wank and arguments that had started up around whether or not the nomination was deserved, and who it was awarded to.

seen many talks on HUGOS AWARD nomination for fans fiction site name AO3 (dang archive of our own) saying: thats silly those are books about captains america and handsome bob downy kissing. GUESS WHAT YOU DONT GET TO DECIDE WHATS SILLY THEY DESERVE THIS PRAISE CONGRADUTAIONS AO3[2]

After discovering that he was also a character appearing in works on AO3, Tingle then tweeted,

The same day, a fanfic based on the new story was published to AO3. Upon learning of this, Tingle tweeted,

Not long afterwards, Chuck Tingle made an observation about the sales of his Archive of Our Own-inspired work and the fanfiction community:

would like to point out something interesting. sales of new tingler about fan fiction community are going VERY VERY WELL. this is not a brag, this is to say that it SAYS A LOT about this community as supporters of ARTISTS and other writers i think it says you are true buckaroos[6]