Star Trek: Picard is the seventh live-action television series set in the Star Trek universe. It began airing in January 2020 and is a sequel focusing primarily on the character of Jean-Luc Picard.

Several existing characters from Star Trek: The Next Generation and Star Trek: Voyager make appearances on the show.

The show begins with Picard living a quiet life in a vineyard on Earth, now retired from Starfleet following his displeasure with how the organization handled the evacuation efforts following the destruction of the Romulan sun. He has frequent dreams about Data and seems to still be deeply affected by his death. Picard is visited by a young woman named Dahj who claims to have cryptic instructions to find him after an attempt on her life. Picard believes her to be Data's "daughter", but Dahj is killed by Romulan assassins before he can find proof of this theory. He attempts to take the matter to Starfleet, but because of the ban on synthetic life and research (an event covered in more detail in Star Trek: Short Treks), his request is ignored. Remembering that Dahj mentioned a twin sister named Soji, Picard puts together his own crew to find Soji and protect her before she meets the same fate as her sister.

Gen fic is very common in the fandom, most likely due to the show dealing more with platonic or familiar relationships rather than romantic ones.

Following a brief scene of Raffi and Seven holding hands at the end of Episode 12 femslash fic quickly gained popularity, with some fans taking this as a way to make up for not seeing the character in a queer relationship during Star Trek: Voyager. Interestingly, two days before the episode premiered, the sitcom One Day at A Time appeared to predict the scene in Star Trek: Picard, with a character insisting that "Seven of Nine is gay." [1]

Many fans appeared to pick up on the chemistry shared between Elnor and Hugh during their few scenes together. This was further bolstered through comments made by Jonathan del Arco (who reprised his role of Hugh from TNG) in an interview with IGN, where he confirms that there were romantic feelings in his performance. [3] 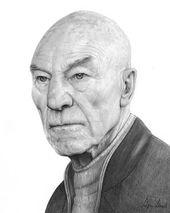