From Fanlore
(Redirected from Sheare Bliss)
Jump to: navigation, search

Karen McFadyyon is one pseudonym used by this prolific writer, active in many fandoms.

She was an early and influential slash writer in SGA who pulled all of her stories from the web in 2006. As of February 10, 2010, Karen McFadyyon's SGA fanfic has been posted to Wraithbait.

Her X-Files story, Complicated Shadows has a complicated history.

As Sheare Bliss, she wrote Scully-Mulder centric gen X-files. Writing under the name Kassandra or KassXF, she was hugely influential in X-Files.

She also wrote as Kassandra in TPM fandom, often with Kate (aka DB Kate), and as KassXF (later anonymous co) in Due South, writing the fandom classic Busted among others.

She was a frequent commenter (often controversial and in the middle of conflict) at alt.tv.x-files.creative where she posted used the name Bliss and Sheare Bliss. [2]

She also wrote as Cassieopia in Andromeda fandom.

She never announced her changes of pseudonyms, but she has a couple of characteristic writing 'tics' that made it easy to trace her from fandom to fandom. She is best known for her long h/c stories.

From a 1998 interview: "I only have two [aliases]. Believe it or not. If you listen to Sheryl Martin, I have a gazillion. But I only have two, and one of them is really my name. But I'm not terribly secretive, obviously, or I wouldn't have TOLD!" [3]

This fan was also head mouse and creator of Debbilmice. 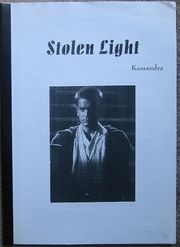