The cover art is by Laura Sherman. 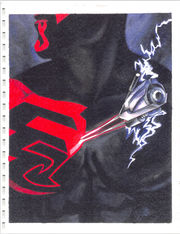 The stories focused on Darth Maul and in 2008 they were assembled into a 175+ page fanzine with nine illustrations by Laura Sherman. Some of the art can be found here.

A collection of dark short stories, written by Teresa Kilmer, that set a new standard in Darth Maul fandom. In this alternate universe series, Maul survives the horrific events of "The Phantom Menace," and the subsequent exile to his homeworld starts him on a new — and confusing — life. His bitterness towards Obi-Wan and the Jedi leave him battling Darkness on his knees.

From the zine itself:

This is the entire Patient Z series of AU Darth Maul stories that I've written since late 1999, after The Phantom Menace had fermented in my brain for several months. The character of Darth Maul grabbed me instantly, of course, given my propensity towards Sith Lords, but I wasn't compelled to write about him until exploring Net fanfiction for the first time.

No one was writing the stories I wanted to read.

So, I wrote 'em myself. You hold the results in your hands.

The stories were written out of order, as ideas and plotlines came to me, so there is no overall character arc that a novel would require. Any errors in continuity are mine. And, fair warning, it does not have a happy ending. If you're looking for frolicking bunnies, tail-wagging puppies and a glowing Hollywood sunset fade to black, you're in the wrong place. The character demanded this ending from me; I couldn't force anything weaker upon him.

Several stories are brand new to the world and have never been seen before: "Purge Us from Thy Womb", "And Farewel to Thee", "Fire Fire Burning Bright". Some were previously published in various Star Wars zines: Imperium, Delusions of Grandeur, Millennium, I Don't Care What You Smell and Return of the Rest of the Garbage [1]. A few of the stories in the bonus section were posted on RedSith's Fanfic Archive (http://www.redsith.yahoo.com). Some of the stories are gen, some are explicit slash. I have marked ratings in the Contents section.

I have many heartfelt acknowledgments to make. To ZP Florian, who's first cheerful note introduced me to Star Wars zine fandom; to Marti Schuller for her gentle editing touch when I submitted my Very First Story to her; to Cheryl Pryor for taking me under her wing at MediaWest and introducing me to the gang; to the zine editors who were kind enough to accept my submissions over the years- Cheree Cargill, Kelly Kline, Gus Downey, MJ Mink, and Judy Yuenger. Warm thanks also go to Veronica Wilson, Barbara Gardner, Cara Loup, Alex Jones, RedSith, and Teri Faulk for their feedback on my stories.

Thanks as well to George Lucas for creating this wonderful sandbox and allowing us the freedom to build our own sandcastles within it.

And thank for sharing this alternate universe with me; I hope you enjoy it.

In 2001, Teresa Kilmer wrote a defense of writers removing their online fic in "Here Today, Zined Forever," an essay in the Fanfic Symposium:

I cannot understand [the] 'outrage' when stories are pulled from the Net [to be republished in] zines. The logic completely escapes me. First, [some argue] that netfic is free anyway. (This is a false statement. Not everyone is a grad student with their Net access chummily provided them by their university. Most adults I know pay about $20 per month for Net access. That's $240 a year- a long way from free and the equivalent to about ten zines.) Then [they complain] because something free (and therefore less valued) is gone.'

This is a very simple problem to solve. Really, if you like the story that much, send a loc to the author and ask permission to save it to your hard drive or print it off. Given the transitory nature of the Net- sites disappear, television shows issue 'cease and desist' orders, an ISP goes down, an archive mistress gets angry with an author and pulls her stories- it's irrational to complain about a medium that is, by its very nature, constantly in motion.

Bottom line- there are NO guarantees (nor should there be) that once a story appears or is started on the Net, that it will be there forever. Get over it- the Net is simply NOT permanent.

As a writer, at no point in time do I feel any sense of "obligation" to Net readers beyond writing the best story I can. I am certainly not obligated to provide Net readers with access to my stories and their sequels, etc in perpetuity- that's an absurd notion. Taking this logic to the extreme, that would mean I couldn't remove my stories from a particular archive (which I have done) because I didn't like the snuff stories there. As author, I choose which medium presents my stories; moderated archive, public archive, list or print zine....

Overall, I think it's the sense of entitlement .....that bothers me the most. Its very real possessiveness about others' fan fiction seems misplaced. The bottom line is- whether a work in progress, sequel to a story or part of a story series- you are simply Not Entitled to someone else's intellectual property.

Enjoy them while you can, when you can.