Prompt/Summary: Arthur is a BNF and Merlin is his prized beta.

The story is set in the fandom for Starz Camelot,[1] which didn't air before April 2011, so it's not only a Modern AU with Merlin and Arthur writing fanfic about their namesakes, it's also a fandom futurefic.

Pairing: Pendragon/Merlin was written as a WIP[2] and immediately recced[3][4][5] as something not just for Merlin fans:[6]

This is killer funny meta/social commentary (regardless of what fandom you are in). Like reading a fanfic about your life on lj writing fanfic. *diez*[7] 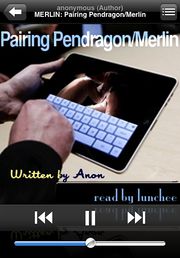 Lunchee turned the story into a 2:36:17 hours podfic[24] and snottygrrl made the story available as an ebook in epub and mobi format.[25] In Lunchee's notes it says that "This podfic really stretched my capabilities as a reader" and fans immediately commented that "the fic must've been hell to read, what with all the IM conversations with smileys and acronyms and awkward punctuation."[26] At the end of the file the podfic features Lunchee's commentary on creating this reading of Pairing: Pendragon/Merlin, thougths on the different sounds she used and what parts she liked best. The idea for the ebook cover was nabbed from Lunchees podfic cover and the picture of the kissing boys was taken from the fic.[25]

If you're in Merlin fandom & you've not read it, hie thee hence. If you're NOT in Merlin fandom - I'd still rec it. I figure pretty much all you need in order to enjoy a Merlin AU is to know the VERY BAREST minimum about Arthurian legend (there was a king called Arthur. He had some knights. His wife was Guinevere. His court wizard/BFF was the wizard Merlin) and to know that Merlin is the ridiculously pretty boy with the cheekbones, and Arthur is the snooty blond prat to whom he's devoted. There - you're all set now. Painless, eh? No, why you should read this (if you can stand it being a WIP) is because it's delicously, deliciously metatextual. Arthur is a BNF writing in the nonexistant 'Camelot' fandom (which is elaborated upon quite scrumptiously); Merlin is a humble wee fanwriter of exceptional skill but no reputation who becomes his beta. Together they fight crime. They are adorable. Regardless of whether you're familiar with 'Merlin', if you're in fandom, then this should have an ineffable charm all its own, written as it is in a mixture of straight narrative, emails, instant messaging and beta commentary. It's terribly disarming, with its sense of fannish squee, and euphoria, and the whole hothouse atmosphere of fandom. Who hasn't been over the moon when a writer or artist they admire says something nice to them? This is a fic about that whole starstruck sensation, and about the ridiculousness of fannish prestige and hierarchy, and about the contrast between fandom and RL. It made me want to smish everyone to death.[5]

"This fic is a candidate for my fic of the year, yes, even though the year has just begun. It's just that brilliant and I loved it that much. I loved it so much that I'm still all starry-eyed a day later. It is, indeed, a fic about fandom. But it would be a rather anti-rec for me 'cos while I read a fair share of amusing and witty and spot-on meta fics, I haven't seen a single one that would do more than amuse me. Well, I haven't until now. This fic is about fandom, and it is witty and very funny but it's also kind and humane. The characters do read like real people, only those written with love and understanding -- and a bit of kind irony, turned more towards the author themselves since it's a story about them too, as well as you and me. What amazed me was how well the author understood the mindset of both a small nobody and a very popular person in various fandom-y things, their troubles and ways of living in our mercurial community, and how well the author showed their feelings. They feel real, so bloody real! My hat off to the writer who can bring to life characters like those. Yes, all our fandom habits and idiosyncrasies are reflected in this story... but it actually feels as if you were watching a film about things happening on your flist right now, and it turns out to be an amazingly captivating, plotty, moving and funny film."[15] 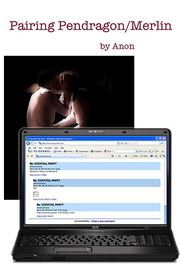 "So if you were holding off reading the Meta Merlin fic from the AnonMeme because it was a WIP? It's not a WIP any more. Seriously - I don't care if you've ever seen 'Merlin', or give a damn about the characters. [...] But if you're in any fandom, then you WILL laugh, and wince, and nod, and make horrified squeaks of recognition at this depiction of how we interact, for good and ill, online and off. The bickering trolls in the anon meme, the bitchiness, the kindness, the burgeoning friendship, the hothouse atmosphere of fandom, that visceral sense of homecoming when one meets up with other fans in RL - seriously, it's like a love letter to fandom, warts and all. (No Arthurian pun intended.) [...] It's us, on the screen. Not that it valorises fandom - but how often do you ever see who we are and how we are with one another being the subject of a story in any medium?"[11]

"It's a Merlin AU by an anonymous author, and tells the story of a BNF in the Camelot fandom called Arthur (whose LJ pseud is Pendragon) and the beta - Merlin - he falls in love with. It is chock full of meta about fandom. Just so incredibly well observed, it makes my brain spin!"[27]

"Not just for Merlin fans, because it deals with issues that are recognizable across fandoms like finding a good beta, being popular vs (relatively) unknown in fandom, stressing over meeting someone in real life you only know online so far, the bad coming with the good when you're well known within fandom, the difficulty of reading tone over the internet and the misunderstandings that can come from that etc. etc."[6]

"I did spend all afternoon laughing my ass off while reading it. It's technically written for the Merlin kinkmeme but there's no actual kink and as some have said it reads perfectly well as fandom meta -- it's a story about fandom and the funny shit we do and the weird dynamics we create with one another. The author utterly nailed the occasionally slightly fraught dance between a good beta and a receptive writer, and the romance is sweet. In all: this is sometimes what my life is like, and probably sometimes what your life is like, too. :) It's worth a read."[23]

"I'm not in the Merlin fandom, but you don't have to be to enjoy this fic. I'm sure there are Merlin-things I missed, but I read it as an original slash fic set in fandom. The premise is that two fanboys, one a BNF and the other a lurker, get to know each other on LJ and fall in love. It's so freaking adorable and funny, and taps into the politics of fandom, good and bad, in brilliant ways."[13]

"It is really a love story about fandom, to fandom and for fandom. Not just the story of how two lovely boys hook up over the internet. It is seriously one of the most amazingly fun and funny and fabulous things that I have ever read and now it is finished and I think you should all just give it a try even if you could care less about Merlin fandom."[28]

"Yes, yes I know: everyone and their moms have already recommended this fic, but seriously, just read it if you haven't already. It is the best meta fic about fandom I've ever read, knowing and fond and just beautifully crafted. It's technically in the Merlin fandom, but if you're in Fandom, fullstop, do yourself a favor and read it. It is a delight."[29]