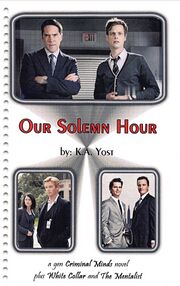 Our Solemn Hour is a gen Criminal Minds 114-page novel by K. Ann Yost. The front cover is by Sheila Paulson. This zine also contains two short stories in the same universe from The Mentalist and White Collar.

Summary from the publisher: "On a day when the world seems to be going to hell, the BAU faces the overwhelming task of flushing out a traitor in their own government while keeping the country operational after terrorists strike several US cities. While Hotch struggles with his grief over Haley's death, taking care of Jack and his new role at the Bureau, Reid takes drastic life-or-death measures to protect the team and secure the nation."