You may be looking for Nara Shikamaru or genderbent versions thereof.

Most often the name Nara Shikako refers to the self insert original character (or SI OC) from the popular Naruto fanfiction Dreaming of Sunshine by Silver Queen and the subject of a wide variety of recursive fanfiction and fanart, although some fanfiction use the name "Shikako" for genderbent portrayals of Nara Shikamaru. Works will almost always either mention Dreaming of Sunshine or mention that they're genderbending Shikamaru. Attempting to discern whether or not Shikamaru still exists or has been replaced by Shikako is also more or less foolproof, although some fics (such as mission fic) may not mention Shikamaru either way.

In Dreaming of Sunshine, Shikako is the younger twin of Shikamaru. She remembers a past life during which she read the Naruto manga and saw the anime, and narrates the fic in first person. Shikako's reincarnation isn't intended to be a plot point in Dreaming of Sunshine and is instead "a conceit that allows the story to take place at all"[1] rather than a mystery to be solved. Accordingly, her reincarnation is used only to give her knowledge of the future and an outside perspective on the Narutoverse

The former allows tropes and emotional beats common to fix-it time travel fics and gives Shikako strong character motivation, as she's aware nearly from the moment she's born that the end of the world will need to be prevented when she's about 16. The latter gives a good excuse for Shikako to explain things to the reader in real-world terms, for example contrasting the ninja Academy with the normal, civilian schooling that Shikako mentioned. Shikako spends much of the beginning of the fic trying to keep from changing the future too much, which would make to knowledge useless, and considers it dangerous to use information she remembers "from Before" but can't confirm or source in this life both because circumstances might change and because she has a lot of information she cannot justify knowing. She also frequently forgets things. 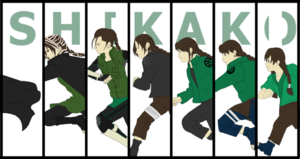 Fans tend to mimic the way Silver Queen draws Shikako — she's been drawing Shikako and putting the results up on deviantart for years, often showing ways Shikako will progress before she's done so. For example, Silver Queen's piece to the right shows Shikako in her special jounin outfit (third from the left, with the bone-white shin- and arm-guards) and in sage mode (second from the left, with white streaks in her hair). When Silver Queen uploaded this picture in 2014, Shikako hadn't switched to her special jounin outfit yet or gotten the animal summons needed for sage mode. In the gallery below, you can see that fans join in on illustrating future things including basically confirmed future developments like sage mode and unconfirmed career advancements like Shikako beating our Naruto and Sasuke for Hokage. Fan artists also illustrate scenes from the fic, like showing the aftermath of Shikako and Gaara's fight at her second Chuunin Exam, and produce works that explore common themes, like the on-gong tension between Shikako and Shikamaru.

Recursive fanfiction is usually in third person limited despite Dreaming of Sunshine being in first person; this is possibly because of how close Silver Queen is with her community and the fact that Shikako is loosely based on her (so it might feel awkward to write her in the first person knowing that Silver Queen will read it), but it may also just reflect the general preference of fan writers to write in third person.

A large majority of non-crossover fics are gen. This is partially because Shikako is canonically uninterested in romance, as well as aro-ace via Word of God, and many recursive stories choose to keep that characterization intact. Some fans who like shipping speculate that Shikako may come to want romantic relationships after she's gotten through the canon plot. Common ships include Sasuke/Shikako, Shikako/Gaara, and Shikako/Ino.