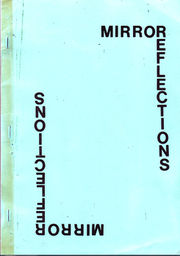 The different stories form a consistent chronology that takes Kirk and Spock from friendship to love to sexual union. While each story is written by a different author, this zine is basically a novel with multiple authors. Similar zines are Starwyck and The 25th Year.

See reactions and reviews for Predator or Prey.

See reactions and reviews for How it Should Have Been.

See reactions and reviews for He Hides You Well.

See reactions and reviews for The Tantalus Field.

See reactions and reviews for Insurance.

See reactions and reviews for To Catch a Thief.

See reactions and reviews for The Sentry.

See reactions and reviews for To See Ourselves.

See reactions and reviews for Pride Goeth Before.

See reactions and reviews for Decision at Deneva.

See reactions and reviews for Kesla.

See reactions and reviews for Threnody.

See reactions and reviews for The Bait.

See reactions and reviews for The Ultimate Weapon.

See reactions and reviews for Reassurance.

See reactions and reviews for To Summon the Future.

See reactions and reviews for Where the Horizon Lies.

See reactions and reviews for Lord of Fire.

[zine]: This zine aims to trace the K/S relationship in the Mirror Universe. Although each story can almost stand on its own and has been written by a different author, I feel overall enjoyment of the zine depends on reading the stories as a whole: a progression through the K/S relationship from its inception to the ultimate finale. From the beginning, we have two relatively vicious characters in Kirk and Spock. Once Captain Pike dies, Kirk takes over the Enterprise and Spock's cautious loyalty. During othe course of the zine, many events occur: an experience with Kirk's Enemy Within, the Tantulus Field, Spock's sexual rapport with Lieutenant Kyle, his matrimonial ceremony with T'Pring, an encounter with our Mirror Universe, K & S's first attempt to build upon a sexual relationship, and an Incident at Deneva. It is at this point that a change appears to occur in our two tough and hardened heroes. In my opinion, a definite alteration occurs which depicts both as much softer, vulnerable and reflects more the characters of our gentler universe. In time, Kirk and Spock decide to form a surface bond - a lighter, less committed version of the deathbond, but one which strengthens despite obstacles such as Kirk's marriage to Miramanee and Spock's stubborn reluctance to trust Kirk sufficiently enough to form the death bond. And before you all ask... yes, it's a happy ending! In effect, Mirror Reflection is a collection of scenes lifted from the lives of the Alternate Universe. They stand out like stills from a film, emphasising a particular episode, making a particular point and always carrying the relationship forward. I've always had my own favourite highlights from the series and likewise with this zine. I enjoyed He Hides You Well, Imperial Interlude 3, To See Ourselves, Threnody and especially The Ultimate Weapon. It must have been quite a mammoth task to have decided to compile such a collection of stories and since so many contributed to Mirror Reflections, differances in style of writing are inevitable. Yet I'd say the zine has been successfully edited and collated and overall, it is recommended as a worthy possession! [1]

[zine]: I definitely recommend MIRROR REFLECTIONS (from D. Dabinett), It's the best thing she's ever printed. [2]

[zine]: I think you'd enjoy MIRROR REFLECTIONS. It is about the origin and development of the K/S relationship in the Mirror universe. A number of different writers, includ ing K.S. T'Lan, wrote the various stories, then T'Lan pulled them all together and made them consistent with each other. Except for a few minor discrepancies and characterization interpretation differences, they all work together incredibly well. If you like T'Lan, you'll like MR. [3]

[zine]: I was really desperate for a K/S fix not long ago, and since there weren't any new zines coming my way I started digging in my closet and came up with this novel. It's a measure of how anxious I am to read Mirror stories that I'd bought this zine at Revelcon a year ago and had never even gotten around to reading it. But now I've read it and I'm glad I did. Mirror Reflections was a compelling reading experience. It's an English production done in the early eighties, from the same group of people who produced Starwyck, Bigot, Brother, Bondmate, and other classic K/S tales. The story was apparently sketched out and then different chapters assigned to different writers, much the same way that The Twenty-Fifth Year was by Alexis Fegan Black. The authors Include: D. DuBois, Teresa Hewitt, K.S. T'Lan, E.D.C., Jo Martin, Sara S. Reynolds, Jane Jones, [Elaine W.], Jane J. Coulson and others. Many of these authors contributed to English K/S during the eighties, especially in the Duet series.

However, Ms. Black seemed to exert much more editorial control over the material in The Twenty-Fifth Year than is shown here. My primary complaint with Mirror Reflections is the inconsistency between chapters. There will be a gripping tale by K.S. T'Lan that implies an emotional bridge has been built between the distrustful mirror Kirk and Spock, and then in the very next chapter, perhaps even the next page, another author has put forward an entirely different interpretation of the emotional status of their relationship at the same point in time. This got to be more than a little frustrating. As a reader I could never trust myself to the flow of the story, since I was sure to be fooled.

I've read enough Mirror stories to know that many of them follow a K/S formula, the same way regular K/S stories can/do. (Not that this is a desirable state of affairs.) I wonder what the status of Mirror stories was when Mirror Reflections was published, and whether this group of stories served as a forerunner for most mirror universe stories to come. Seemed like most mirror cliches were included, but written in a fresh, almost naive way. Many English stories, I've found, manage to pack a lot of plot detail into a very little space. That's part of the charm of stories from our sisters across the ocean.

In this tale Spock's bastard half-brother serves as one of his guards and is the focal point at the ending. But he's a shadowy figure until the very end, and I thought his sudden introduction as a fully-rounded character was cheating.

I'd recommend this novel/collection of stories to anyone who likes the Mirror universe, and anyone as desperate as I was to go rooting around in your closet for that K/S fix. [4]

[zine]: Most of my zines are stored in boxes in the spare room, and I have been existing on the 50 or so accessible in my cupboard, but given another soaking wet day I decided that I needed a new infusion of k/s. After I moved the baby seat, and car booster seat, stored for when the grandchildren come to stay, the holdalls for weekends away, and all the other domestic detritus for which there is no designated storage place, I finally got down to the box lids. I hauled out about a dozen assorted zines, Counterpoints, First Times (early ones), and Mirror Reflections. This is available from the zine library in America, but not from Kath Boag. Published, I think, in 1984 or thereabout, by some of the English authors, it follows Mirror Kirk and Spock‘s story from Kirk‘s arrival at the Enterprise under Pike‘s command, his death at Kirk‘s hand and through many of the aired episodes transposed to the A/U to their final bonding and acceptance of each other. It explores Vulcan traditions in the taking and claiming of a mate, and of Warrior Bonding. 22 stories in all, by various authors, with illustrations and poetry, but all meshing together beautifully. The Editor, [D. DaBinett]/Dubois? recommends that they be read in chronological order and I agree, but that didn‘t stop me from re-reading some that caught my attention. It left me with a warm glow of satisfaction when I had finished it, and a longing for a sequel. Worthy of republishing. [5]