Massteria! is a Star Wars and multifandom filk songbook.

It is one of three songbooks put out by the L.A. Filkharmonics. All bear the subtitle "Star Wars & Other Filksongs."

Massteria was published in 1980 and is 40 pages long, offset, printed by John Trimble.

The folksongs are mostly about Star Wars, with a little Battlestar Galactica, Doctor Who, Star Trek, Pigs in Space, Darkover, and Dracula.

Massteria! Strikes Back was published in 1982 and is 64 pages long, offset, printed by John Trimble. It has the subtitle: "Star Wars & Other Filksongs." 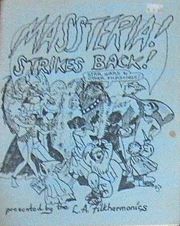 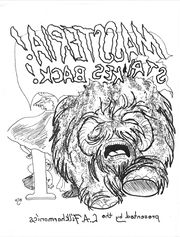 The year was 1977. It was summer in Los Angeles. Something big was happening to us, something bizarre, something amazing...something STAR WARS! Like a laser blast from the blue, like a....well, you know. It probably happened to you, too.

When we heard the wonderful Star Wars filksongs of Dorothy Fontana and Lynn Barker that summer, we were inspired to write our own. That fall, we started work on Otto, the trained baby bantha, our first masquerade entry. Our stage career began with him in an overwhelming odor of burlap. Then came the uniformed Pigs In Space crewmembers, singing their anthem. From there it has gotten stranger. (No, really, there are stranger things than Link Hogthrob.)

Since then we have performed as half-time entertainment at con masquerades, at fan cabarets, at filk-cons, in a college concert series, and twice on "Hour 25", a science-fiction radio show. Our first book, Massteria!, was published in 1980, with the help of Nick Smith, who typeset the whole silly thing, and John and Bjo Trimble, our tremendously patient printers, and a number of fine artists.

This is May, 1982, five years (five? yup!) after Star Wars, and one year and counting to Revenge of the Jedi. We are still writing Star Wars songs, as well as Doctor Who, Battlestar Galactica, Star Trek, Raiders of the Lost Ark, Flash Gordon, Darkover, vampires, cats, and any other type of filk song that strikes our warped minds. If it stands still and doesn't fight back, we filk it.

You are holding our second book, Massteria Strikes Back, bigger and at least as strange as the first, and you should stop reading this and start singing. Yeah, now. Go on. That's better...

Return of Massteria! was published in 1985 and is 68 pages long, offset, printed by Michael Walsh/Crown Prints Press.