The pairing is commonly cited as an example of the most squicky or "out-there" ships the fandom has to offer. Many are uncomfortable with the pairing largely due to the characters' 100-year age difference[1] and the fact that Dumbledore is commonly seen as a grandfather figure in canon.

Many Harry/Dumbledore fanworks use time travel or another method of de-aging Dumbledore in order to make the pairing more appealing. Others focus on the age difference as a kink.

Harry/Dumbledore is a very rare pairing, without any central sites or communities. There is not currently a single journal community devoted to it[2] -- though there appears to have been one on LiveJournal, called albusxharry, that was active circa 2007[3] -- and the ship has essentially no presence on Tumblr.[4] As of July 2013, it appears never to have been recommended at Crack Broom, which has around 450 pairings in its memories.

Today, the majority of Harry/Dumbledore stories are found at the Archive of Our Own or FanFiction.net.[5] Kinkier stories are more likely to be found on LiveJournal or more specialized archives (such as the Potter Slash Archive).

Before the publication of Order of the Phoenix in July 2003, the ship was virtually nonexistent. Two rare examples of pre-OotP HP/AD fanworks are "Kind Monster," a poem by npetrenko published in October 2002, and "Call Me Albus," an NC-17 rapefic set during the summer after Goblet of Fire, published just days before OotP's release.

Order of the Phoenix brought increased interest in the Harry/Dumbledore pairing, as some fans interpreted slashy subtext in scenes featuring Harry and Dumbledore. In October, the "HMS Old Scars" SCUSA thread was started for the ship, and opened with a quote from OotP Chapter 37, which describes Dumbledore and Harry's relationship as "closer then that of headmaster and pupil"[6] Though the thread generated under a page of discussion, several other fans agreed that OotP contained slashy Harry/Dumbledore overtones.

Like OotP, some fans found Half-Blood Prince and Deathly Hallows to be rife with subtext, and several meta posts were dedicated to the topic. For example:

Deathly Hallows brought about a surge of a new Harry/Dumbledore stories, especially time travel fics. "Harry-goes-back-in-time-to-prevent-Voldemort-from-gaining-power" was already a popular trope in fandom, and the insight provided by DH into Dumbledore as a teenager -- who was soon confirmed to be canonically gay -- encouraged fans to start pairing him with time-traveling Harry.

This type of story is popular on FanFiction.net, where several of the major Harry/Dumbledore stories in this genre were posted and based on one another.[7]

Due to the lack of a centralized community for the ship, there is not one universal pairing name. Denoting the pairing by initials ("HP/AD" or "AD/HP"; sometimes "H/DD") is the most unambiguous and thus is common, especially on sites like FanFiction.net. "Harry/Dumbledore" (or "Dumbledore/Harry") also exclusively refers to the Harry Potter/Albus Dumbledore pairing, as Albus is the only Dumbledore who is referred to by his surname alone. 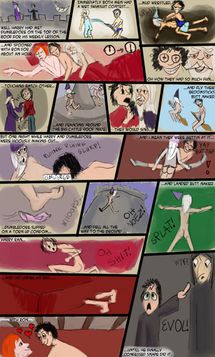 Since the publication of Deathly Hallows, the use of "Albus" alone in pairing names has become ambiguous: "Harry/Albus" has come to indicate the Harry Potter/Albus Severus Potter pairing much more often than it does the Dumbledore pairing. However, many "Albus/Harry" works refer to Albus Dumbledore -- though this denotation tends to be associated with certain types of Harry/Dumbledore works (for example, stories from Dumbledore's POV or set when Harry is underage).

In October 2003, the SCUSA forum at FictionAlley dubbed the 'ship "H.M.S. Old Scars". This name is not in common usage outside the forum.