From Fanlore
(Redirected from Estrogen brigades)
Jump to: navigation, search

An estrogen brigade was first a form of a type of fan club. As the name implies, it's generally made up of women, and were originally devoted to a (male) actor, although later characters had estrogen brigades as well. 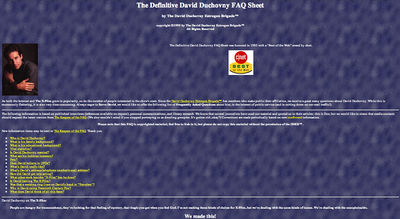 The first estrogen brigades were private mailing lists, and later ones moved to public websites.

Testosterone brigades -- considered to be an offshoot or parody of the estrogen brigade phenomenon -- weren't far behind.

The movement spread with the Mitch Pileggi Estrogen Brigade (MPEB), which was formed in early 1995 "as a fan club for women on Delphi Internet who admire Mitch and his work. The club soon expanded to include women on all services."[2] The Lone Gunmen Estrogen Brigade [3] soon followed.

The term spread out to other fandoms as well, and estrogen brigades were eventually formed for a wide range of actors and characters, including Darth Maul, Jon Stewart, Yoda, Paul McGann, Robert Beltran, and Leonard Nimoy, pretty much most popular media male actors of the time. An example of a rare one, this one for a BNF, was the Barney O'Borg Estrogen Brigade.

The first estrogen brigades were closed mailing lists, and some had highly-sought after memberships. The original David Duchovny Estrogen Brigade, for instance, had only 38-40 members, before it branched out into other mailing lists called "DDEB2" and "DDEB3." Fans not on the actual mailing list were able to visit the FAQ page, a website that had a lot of information about the star. Many fans confused being able to access the FAQ page with being on the mailing list, and perhaps didn't even know a mailing list existed.

The "David Duchovny Estrogen Brigade" was especially influential in that the media gave it much exposure. This was due to 1) how media latches onto things and doesn't let go or dig deeper, 2) the DDEB's spokespeople were very charismatic and visible, 3) people were just becoming aware of the internet and all the wonders therein, 4) X-Files was wildly popular, and 5) the idea of women gathering together and talking frankly about sexual desire was novel.