Epistolary fic is fanfic in the form of collated documents. Most usually these are letters, often written between the characters in a romantic pairing (for example, No Unicorns, a Pros story in which Bodie and Doyle write to each other). Email may take the place of traditional letters when appropriate to the story's setting. Other types of documents—such as diary entries and newspaper clippings (or a mix of forms)—may be used as well, or as an alternative. 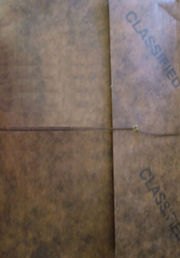 cover of the Pros zine, Classified

Some epistolary fic is actually multimedia, consisting of pictures of handwritten letters between the characters. An example is Timelapse by Musamea in X-Men fandom.

One of the more impressive multimedia examples of epistolary fiction was the Professionals zine Classified, published by Keynote Press. Its first print run consisted of a portfolio full of 435 separate documents -- letters, memos, cards, notes, and artwork -- numbered in a sequence that formed a story. (As production of this was extremely complex, later print runs were regular zines, with the documents written up as plain text.)[1]

A twist on epistolary fic was the Dead Letters Challenge, in which the letters were written by characters from beyond the grave.