From Fanlore
(Redirected from Darkover Cookbook)
Jump to: navigation, search 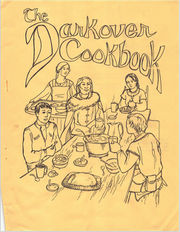 The Darkover Cookbook was the second publication of Thendara House.

The first ads mentioned Tracy Blackstone as the main compiler of this zine, but this name is left off of the actual cookbook, which lists Marion Zimmer Bradley with the assistance of Bjo Trimble, Jacqueline Lichtenberg, Devra Langsam, and Walter Breen. From the introduction: "Most of these recipes I worked out for myself; every one of them has been tested and cooked, either by me, or by someone whose intelligence I trust (Thank you, Bjo and Devra.) Therefore, I invite you to try them for yourself. It is taken for granted that all ingredients have been converted into Terran equivalents; blackfruit, or the hindquarters of a rabbithorn, are not commonly available on Terra in the 20th century."

The front cover and interior illustrations are by Diana L. Paxson.

From a later flyer: "These recipes have all been tested using the nearest Terran equivalent to the foods of Darkover, and even if you don't like to cook, the chat ABOUT food is entertaining to anyone who loves to eat. (And don't we all!)"

Those who have special interests are likely to see all of human history in terms of their own specialties. My husband Walter Breen, who is one of America's most renowned numismatists, once told me that the history of what humans used for money accurately reflected and detailed the level of culture that particular civilization had reached; and I remember once sitting with Adrienne Martine while she wrote a speech purporting to prove (and, for all I know, really proving) that one could index the level of a civilization by the materials, construction and style of the clothing worn within that culture. (It was this theory which prompted our first publication, the booklet by Diana L. Paxson, COSTUME AND CLOTHING AS A CULTURAL INDEX ON DARKOVER.) [2]

I imagine an introspective plumber — if there are any; so far I've never met one who could see very far over the rim of a stopped-up sink — could make an excellent case for the notion that a civilization's plumbing adequately indexes its level of culture. Scientists define civilization by the level of technology which a culture has rectched —in fact, there are those who identify civilization as eqgivalent to technology, though I would not call these people scientists, but technocrats — and it was such a theory, on the lips of Lester Del Rey, which I was attempting to expose, and perhaps refute, in my novel DARKOVER LANDFALL

[snipped: quotes Rex Stout, expands on ideas about world building and food, Ursula Le Guin and food in the book Left Hand of Darkness, availability of food and protein.]

But I did not begin seriously thinking about Darkovan foods and cooking until one year —I think it was 1973— when we were living in an itty-bitty rented house, which forced us to put half our furniture and most of our books in storage, and we simply COULD NOT find room for an office for both Walter and myself. As a result, I rented a basement room for an office down on McGee Street in Berkeley, went there as soon as the kids went off to school in the morning, and stayed there until school was out. There were no cooking or refrigeration facilities, and I therefore kept my favorite snacks (the healthy kind, not the party-munchie kind) in the office for lunches, rather than going out to a local Greasy Spoon or sandwich shop. I usually wound up lunching off a small sack of nuts/seeds/ dried fruits/raisins, or macrobiotic rice cakes with Deaf Smith peanut butter (that's the real peanut butter, with no crisco in it, just peanuts and salt) with, sometimes, a carton of yogurt on the side. At the time I was writing SPELL SWORD, and it occurred to me that some variety of hardtack, with nut butter of some sort, would be an ideal food for storage in bad weather as emergency rations, and I promptly wrote it into the book.

In general, however, my guidelines for Darkovan food (After 1968 or so I say nothing about what I may have suggested in the early books, which, whatever their print dates^ were largely juvenilia) were quite single; What would grow in a cold climate of this kind? My usual test for whether or not it could be served on Darkover has been; would it grow in, say, Scandinavia, Russia or the Scottish Highlands? If so, I assume it would grow in the Domains, if not in the farthest part of the Hellers. Thus wheat is quite possible, as is buckwheat (the source for kasha) since the Ukraine is the breadbasket of all the Russias; also the hardier triticale, developed for the shorter growing season of Northern Canada.

I never claimed that the Darkover books were hard-line scienc;e fiction, and if Frank Herbert can endow his Fremen on Arrakis with a passion for coffee (a plant of tropical rainforests) we can postulate some native spices even on the chilly mountain slopes of Darkover. We'll call it artistic license.

And I offer no excuse for the fact that jaco, the traditional Darkovan beverage served near the spaceport, tastes like coffee and chocolate mixed. In my artistic innocence, when, as a girl just out of my teens, living in Texas (a gourmet's nightmare) I invented this "exotic beverage," I did so in blissful ignorance that a nvunber of variations had already been invented on the basic theme of mocha; since moving to the West Coast and discovering coffeehouses which serve these brews, I drink them with a naive and secret pleasure — akin, I suppose, to the mathematician in rural India who independently rediscovered logarithms—as if I were ordering my own personal Darkovan brew...

Childish? Of course. Why not? There is something of the kid, I suppose, in every writer, and most readers of science fiction —unless, that is, he or she is writing works of Serious Social Significance. But where, outside of Science Fiction, can I invent my own world, and get someone to live in it with me for a while? I'm too old to go out in the barn, as I did with my friend Nancy when I was a kid, and dress up as imaginary characters out of our own books, and "pretend." But —SFWA members ignore this if they wish —I still wish, sometimes, that I wasn't too old to do just that! And this is the best way I can do it now. So I invite you to cook, and to eat, some of these recipes. And if you want to pretend you're on Darkover while you eat them — well, I won't tell!

Long Time in the Making, In the Waiting

It was first offered for sale in March 1976 in the first issue of Darkover Newsletter. Fans who sent their money in at that time had to wait over a year to get this publication, as it wasn't published until over a year later.

Our second publication, the DARKOVER COOK BOOK, will consist of every food mentioned in the first ten Darkover novels, with recipes to match, compiled by Tracy Blackstone, MZB, and others. We are marketing this one together with Marion Bradley's THE WHITE KNIGHT'S COOK BOOK, a collection of recipes guaranteed to be the strangest you have ever seen. They will be a dollar apiece after publication, but before May 1st can be ordered for $1.50 for the two cook books. Send money to the Friends of Darkover, Box 472, Berkeley CA 94701.

The cookbooks are really finished now, and camera ready copy is beind typed/illustrations prepared RIGHT NOW, as you read this. The illustrations to THE WHITE KNIGHT"S COOK BOOK are being done by Diana Paxson, who did our "Costume and Clothing" leaflet. If you have ordered these books and don't recieve them soon, (say by Christmas) please write to remind us. Orders, if you have't already ordered these, are $1.50 for WHITE KNIGHT"S COOKBOOK and $2.00 for the DARKOVER COOKBOOK, which is bigger. [3]

Not so quick: January 1977 comments in Darkover Newsletter:

Yes, despite rumors to the contrary, there IS still a production problem on the cookbooks. Two things kept them from being mailed by Christmas; first, we hesitated to trust them to the Christmas Rush, and second, Diana Paxson, who is doing the graphics, found herself too enmeshed in other projects to complete them. But the camera-ready copy IS being completed, and it's possible that some of you may even receive your cookbooks in the same mail as this newsletter. Or, at least, the White Knight's Cookbook. To whet your appetite -- at a recent get-together of the Thendara Council attended by MZB, Jon de Cles, Walter Breen, Diana Paxson and Tracy Blackstone, MZB brought a Winter Festival Cake prepared by an old Amazon Guild-House recipe, and the unanimous verdict was that it was delicious. This recipe will be in the Darkover Cookbook —but if you still have a Darkovan recipe on your mind, there might still be time to get that one in before the final copy is made up. (Copy is closed on the White Knight's Cookbook.) [4]

Finally? From August 1977, a blurb from Darkover Newsletter, giving those who waited to order it an advantage: Bradley's autograph:

Our first formal publication is the DARKOVER COOKBOOK. All pre-publication orders have already been mailed out, such orders being honored at whatever you paid forth including a couple of early orders at 50¢. If you have not received this COOKBOOK by the time you are reading this Newsletter, write us immediately and MZB will check her records and send you one if you are entitled to it. If you did NOT order and pay for the COOKBOOK in advance of publication, copies are available at $1.50 post paid. (If you want it autographed, you must ask; If you don't ask, your copy will be mailed without autograph.) [5]

We are (temporarily) sold out of Cook Books, but we have already taken them to the printer and the new print run will be delivered on January 3; we are holding all orders till then. If you have not yet received the Darkover Cook Book you ordered, write us-- the Post Awful may have chewed up your order, or your copy, in its insatiable maw. (I should be more polite about the Postal Service --how could we do business without them? Come to think of it, how in Zandru's nine hells do we manage to do business WITH them?) [added in parenthesis in handwriting by Walter Breen]: "WB answers "Not very well."