Copyright: Can Fan Writing be Afforded Protection as "Literature?" 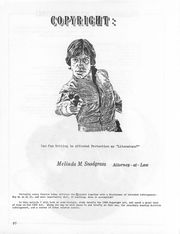 Copyright: Can Fan Writing be Afforded Protection as "Literature"? is an article by fan Melinda M. Snodgrass.

It was published in 1981 in the Star Wars and Star Trek: TOS zine Pegasus #5.

In it, the author discusses the history of copyright, fair use, and how it may relate to fanworks. It concludes with "Knowing then that we exist through the sufferance of these gentlemen, I would suggest that we mind our manners, and give credit and acknowledgement where it is due. In that way I think we may continue to have a long and happy partnership with these marvelous people, who have provided us with so many hours of pleasure."

This article was published roughly the same time as Open Letter to Star Wars Zine Publishers by Maureen Garrett.

Virtually every fanzine today utilizes the ©symbol together with a disclaimer of intended Infringement. Why do we do it, and more importantly what, if anything, does it accomplish?

In this article I will look at some history, study briefly the 1909 Copyright Act, and spend a great deal of time on the1976 Act. Along the way we will pause to nod briefly at fair use, the secondary meaning doctrine infringement, and a number of other related issues.

There can be no question that genre fanzine material has been used "unlawfully." In order to legally use copyrighted material one must obtain permission from the holder of the copyright, I think it very unlikely that any fan writer or editor has obtained individual permission from the copyright holder of their particular genre. Therefore, I am certain that it comes as no surprise that we exist through the sufferance and good will of Mssrs. Lucas, Roddenberry, Larson, et al.

Is there any ray of hope in this? What of a character created solely by a fan writer who just happens to inhabit say, Lucas' universe? Can this character be protected? Over the years a body of case law has been developed which hold that where a work consists of material, some of which Is copyrightable and some of which is not, a copyright may nevertheless be obtained to protect the material which is copyrightable.

At first glance this appears to be a workable solution. The fan acknowledges that Han, Kirk, Chewie, the [missing word], and so forth belong to their respective creators, but the fan then claims that a new character such as a Dirty Nellie, or a Cori Beckett, etc. can be afforded copyright protection.

Alas, I fear that, realistically, this is an illusion. For example, one might say, "This character belongs to me. She is a cousin of Princess Leia's, she wears her hair in buns,she is from Alderaan, and she is very naive and a little klutzy." However, upon analysis what does the fan author actually possess? Actually, very little. The character's relations, home world, even mode of dress belong to George Lucas. The fan is left with a female character who is naive and klutzy, and possibly a name. Even the characteristics are in some doubt for earlier in this article I pointed out that characteristics of mankind are not copyrightable. This blade cuts both ways, however, for by the same token Lucas cannot copyright a swaggering smuggler. He has only the right to trademark the name "Han Solo," not the attributes of this person.

What then is gained by placing the copyright symbol in a fanzine? There are three reasons for continuing this legal fiction under which all of fandom operates.

First, the use of copyright places other fans on notice that the author of a piece is justifiably proud of It and does not want it copied or used without permission. Therefore, the symbol protects us from one another.

Second is the possibility of infringement by a pro-published anthology of fan fiction. Suppose George Lucas authorized DAW books to collect fifteen of the best Star Wars fan stories and publish them. What protection have the fans? Can DAW simply lift the literature without payment? The law is a little muddied in this area, but it is my understanding that this issue was raised over a Star Trek anthology, and the court ruled that the fan authors were entitled to renumeration for their labors.

Third, and most important, is protection for non-genre material which might be included within a 'zine. If an author has written a story or poem or created a piece of art not tied to a previously copyrighted universe, how may she protect it?

Recently certain fan writers and editors have tried to use the fair use doctrine as support for the legality of their genre writings. Although the area is somewhat unclear, I feel that this is impossible. The cases which I have read apply the fair use doctrine in a very narrow sense. Primarily in the arts and science, where it is necessary that one build upon the work of others, criticism, and instruction. Although this may look like an easy out, I would urge fan writers not to depend upon it.

Instead, the best policy is to footnote or acknowledge, or write to the holder of the copyright for permission to use the material. This stricture is not limited to literary works, but also to televised events, lyrics, radio broadcasts, photographs, etc. The only exception to the obtainment of permission is when the material is being copied solely for the purpose of criticism.

There has been an alarming tendency in fandom recently to ignore these basic legal requirements, and legality aside, simple courtesy demands that credit be given to the person or persons whose labor created the work...

For those of us not creating original pieces, but rather romping through the galaxies of Lucas, or Roddenberry, or Larson, is there any crumb of comfort? Alas, I must conclude, very little.

The best that a strictly fan writer can hope for is protection from other fans. All of the provisions of the act that are discussed here provide us with no protection against the people who rightfully hold the copyrights to the universes which give us so much pleasure. Knowing then that we exist through the sufferance of these gentlemen, I would suggest that we mind our manners, and give credit and acknowledgement where it is due. In that way I think we may continue to have a long and happy partnership with these marvelous people, who have provided us with so many hours of pleasure.

Melinda Snodgrass' article on copyright is long overdue. A lot of fen seem to need the reminder that the SW characters are not public property, that we use them on sufferance, and the permission may be taken away at any time, perfectly legally. [1]

Kudos to Melinda Snodgrass for the very worthwhile copyright article done in language even I could understand. A couple years ago - I wrote to a couple copyright lawyers in D.C. and it took them 8 pages of gibberish to say what Ms. Snodgrass said in 5+ pages of clear, understandable non-jargon. Every fannish artist, writer and editor should put it on their required reading list. [2]

Melissa Snodgrass's article on current copyright law and how it affects fandom is must reading; best I've seen on the subject anywhere.[3]

The article is Judith Gran's on copyright. I found it not only enjoyable on first reading but also helpful in my mundane life. I was using the citations in her article to help me practice research in our law library. It was interesting in contrast to Melinda Snodgrass' copyright article in Pegasus V. They both came to opposite conclusions. [4]