From Fanlore
(Redirected from CPSG)
Jump to navigation Jump to search 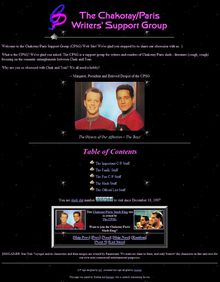 The Chakotay/Paris Writers' Support Group (CPSG) was a support group for writers and readers of Chakotay/Paris slash - "literature (cough, cough) focusing on the romantic entanglements" of Chakotay and Tom Paris. It also had an associated mailing list.

The site was a member of the Chakotay/Paris Slash Ring.

The Table of Contents included:

Important was finding C/P on the net in the times before Google, so there was an extensive C/P Links Page with links to the fanfic websites of CPSG members and recs for other good sources of C/P fanfic. The obligatory link to Minotaur's Sex Tips for Slash Writers was there as well and links to C/P relevant information such official sites, character profiles, trivia, a Voyager glossary, list of minor crewmembers, stardates, reviews, blueprints, episode summaries, etc.

Also important were relationship primers in form of favorite C/P moments from canon, common C/P first time tropes (Ways To Get The Boys Together), an introduction to C/P fanon, an image gallery for visual inspiration (aka 'drooling') and a C/P Sound Clip Archive (to keep in mind what the characters sound like, what exactly they said, and why it's so slashy to begin with). In addition to that there was an explanation of C/P fanfic acronyms and warning labels that was meant to help both readers and writers.

The C/P Fanfic Bible was a list of C/P stories the CPSG members considered "essential" and can thus be seen as a rec list for C/P newbies: 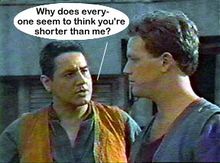 Captured vidcap about "conventions to which we fall prey" in fanfic

Included were once a again the C/P Fanfic Bible and link list and in addition to that the CPSG parody story series Tipping the Scales "in which we poke fun at ourselves (C/P writers) and the eternal C/P conventions to which we fall prey."

Among the fun stuff C/P fans could find the secret love letters of Chakotay and Paris, C/P Tiny Trek by Bad Fan Art Productions (TM), captioned vidcaps that didn't fit anywhere else on the pages, Siubhan's Chakotay/Paris Panty Sweat Page, the obligatory C/P Top Ten lists (aka TOP TEN REASONS WHY TOM PARIS IS YUMMIER THAN CHAKOTAY and TOP TEN REASONS WHY CHAKOTAY MIGHT BE MORE SUAVE THAN TOM PARIS...), the CPSG Caption Contest (So what *is* Tom saying to Chakotay?), and links to sites with slash-inspiring pictures to get the C/P muse jumpstarted. (Also, proof in manip form that Chakotay is really Xena. *g*)

Links here included once again the slash fanfic acronyms, the Ways to Get the Boys Together, and the links to sites with m/m pictures for slashy inspiration.

CPSG banner designed by Siubhan. The CPSG byline was "Dedicated to life, liberty, and the pursuit of slashiness."

This section contained information about the former Onelist and later egroups-Onelist CPSG mailing list, most importantly the The List FAQ and Technical Details, including the "What happened to my email?" section, and there was an introduction to the CPSG for new members and an explanation of the List Guidelines that list members should read before posting.

The basic rules were:

If someone had their own webpage, they could use one of the banners provided in this section to link back to the CPSG. This was also the place to check out the "highly official" hierarchy of CPSG Muses (circa 1997) and learn all about the CPSG-ers by viewing the tongue-in-cheek list Family Shrub (circa 1998).

Other Good Sources of C/P Fanfic