The Left Hand of Madness

The Left Hand of Madness is a slash 200-page Chakotay/Paris novel by Siubhan aka Jennifer Pelland. Cover artwork and graphics by Anna Shuford. 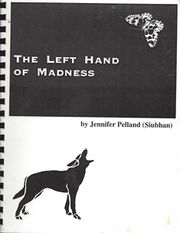 Summary from the publisher: "When Commander Chakotay and Lt. Tom Paris are stranded alone on a planet, some interesting developments occur. Then, when they return, they have to cope with life going on."

Once upon a time, I used to think slash stories were icky. ‘The Left Hand’ series was the one that actually ‘brought me over to the dark side’. Superbly written with an intriguing plot line, it remains one of my all-time favs of Siubhan’s many stories. As if being stranded on an uninhabited planet wasn’t bad enough, a transporter malfunction complicates our favourite Helmboy’s life even further."[1]

One of the first Chakotay/Paris stories I read on the ASC Archive on the Net back in 1996, it made me a believer! These stories were started back in 1995, and written through 1997, I believe, so they show Tom and Chakotay as they were during the first two seasons - you know, before Chak turned into a pussy, before Tom turned into Fred Flintstone to B'Elanna's Wilma, and before anyone had even *heard* of 38 of D - um, I mean 7 of 9.

I love, adore and worship this story. I do. So I'm a wee bit biased. {grin} I know, it has its faults, but its strengths *so* much make up for them! This is one of the most frighteningly realistic depictions of just what it might be like to involuntarily change sex. Having Tom spontaneously change into a female while trapped on an alien planet sounds hopelessly cliched and trite, but when you add in the depth of characterization and integrity that Siubhan brings to these characters, it all makes sense. The whole series explores how two men, both previously straight, maintain a relationship that will tie them together for the rest of their lives. It's powerful, realistic, and sometimes it just *hurts* to read. And you'll keep coming back and reading it again and again.

I've often thought the first story, Left Hand of Madness I, would make a great introduction to slash for someone who had their doubts about it. Technically, it's a het story, since Tom is physically a female throughout most of the story. And since it explores the idea that love isn't dependent upon one's physical gender, and that gender itself is often a construct, I think it might open many anti-slash or homophobic readers' minds to just why we like slash, the red-headed stepchild of fanfiction. But that's just my opinion, I haven't tested it or anything. ;D

I've re-read this story so many times it boggles the mind. I take it out and re-read it every few months. It's a story that changed me, made me grow, and continues to do so. It'll stay with me forever, and I'm eternally grateful to Siubhan for writing it. [2]

The Left Hand of Madness begins between seasons one and two of Voyager--diverging from the show's timeline completely right before Seska's attempt to impregnate herself with Chakotay's DNA--and ends over ninety years later in the Alpha Quadrant. In the first part of the story, Chakotay and Paris are stranded together on a very hospitable planet while Voyager attempts unsuccessfully to rescue them. Due to a transporter malfunction, Tom finds himself slowly changing his physical and biological sex, and in the process discovers how strong a person he really is. As the two of them work together to ensure their continued survival and comfort on the planet, they find themselves drifting into a relationship, a relationship that survives their rescue and Tom's change back to his own body. Parts two through four chart the continuance of their relationship, a shorter piece between parts three and four chronicles Neelix and Kes's struggle to have a child, and the epilogue takes place about eighty years after the end of part four and is told in the voice of Chakotay and Tom's adopted daughter. This story is rated NC-17, and will not be sold to anyone under 18." [3]

I enjoyed it immensely.... the *best* thing I like about the trilogy was that when Paris and Chak split up, and Paris hooked up with B'Elanna, I thought, yeah, they're more suited, P & C had too many obstacles to overcome to really make it work. *Then* when P & C finally got back together, I kinda cheered. (True love wins the day, and all that mushy business, which I must admit I like). Loved also the time P & C spent down on the planet on their own. Great idea, done well. [4]

The first story in this multi-part Voyager epic is a classic, at least in my opinion. It has a typical set-up: Chakotay and Paris stranded together on a planet, with some hurt/comfort thrown in, but with a twist. And boy what a twist! The characters and backstories of Chakotay and Paris are developed well, and the plot and supporting characters are also quite good. But the best things about this story are the plausible reactions to a quite unthinkable situation. The story continues as Chakotay and Paris return to Voyager and find their relationship challenged by their return to their previous routine. There’s an alternate ending to part 1 that takes the story in a completely different direction, and is quite interesting. The main story then continues in parts 2, 3, and 4, with an epilogue as well. Well-written, funny, and sexy, this series will keep you going through various twists and turns, and the payoff is well worth it. [5]

i initially read this when she was writing it, and had to wait for the various pieces, and oh what torture THAT was!

this is CLASSIC and one of the most rec'd C/P's on my list. it's a unique take on a plot device that ends up being NOT wank! (and when you realize WHICH plot device i mean, you will understand).

of the genderbender's i've read, this one still holds up remarkably well under scrutiny! yeah it's got issues, but hey, they're tolerable! and nowhere near as cringe-worthy as some of the other ones i've read that had me screaming for mercy (and brain-bleach) only part-way thru! so, while you may have trouble going back to it, it still DOES hold up as a fic worthy of read if genderbender is your thing :) IMHO of course :) [7]

This is totally a classic... Sure, slash stories have grown and gotten more sophisticated, but this old, classic genderfuck stays in my memory forever. I'm totally happy to see Siubhan's comments above this... You're still around! Now, if someone can get me that funny Chakotay/7 one she wrote....(the one where she realized there are things like PMS in a cave???) [8]

This is not an easy story to read, but it is very well-written and will make you think about your attitude to gender identity and homosexuality.

Tom and Chakotay are on a food-gathering mission to an M-class planet, when the planet starts to time-shift. They unfortunately don't get off the planet in time.

While they adjust to being on a planet without all the conveniences of twenty-fourth (or even twentieth) century life, building a house, making clothing and generally adjusting to not being on a starship, Tom starts noticing some changes. At first it's minor, some body hair falling out, and other changes, but soon he can't ignore the changes to his body, and starts monitoring them on a daily basis. He eventually has to tell Chakotay, and they deal with it, somehow, neither of them has known anything like it before. The changes eventually become complete.

Then they realise that a sexual attraction is growing between them. Tom isn't sure about how he feels about this at first, but they eventually become lovers. There is a very amusing part about Tom suffering from PMS (something any woman can relate to) for the first time, which is one of my favourite scenes in the story. It's not a big, dramatic scene, but the way it's written is so true-to-life that it tends to stick in the mind almost as much as the big, dramatic scenes.

The sex scenes are quite explicit, showing how it might be for a man to make love in a woman's body for the first time, but very tender and romantic. Unfortunately, the unprotected sex leads to an inevitable conclusion, pregnancy. Tom's reaction is not good, to put it mildly, and the men are forced to find a solution.

The men realise that the bond between them is more than just sexual, but then the planet time-shifts back to normal space. They are taken back to Voyager, and Tom's sexual change is reversed by the Holodoc.

The adjustment to Tom's being a man again is not accomplished without some awkwardness, but it is started tentatively.

The story continues in The Left Hand Of Madness Part Two.

This story, although not easy to read, gives much food for thought, and may change your attitude on gender identity. It did mine. [9]

Set in the Voyager timeline. An unusual slash zine starring Chakotay and Paris. As you might imagine from the title, it involves a gender switch and an at-first uneasy attraction between men. It starts out wildly entertaining, hilarious in spots, and gradually evolves over months and years into a genuinely touching and memorable love and family story. It puts a grin on my face every time I pick it up, and it makes me cry, too... [10]