Baman Piderman is an animated web series by Alex and Lindsay Small-Butera starring childlike, crudely-drawn versions of the superheroes Batman and Spider-Man, who live in a surreal world of moving houses, anthropomorphic pumpkins, tentacle monsters and other strange creatures.

Baman Piderman currently has three seasons consisting of 26 episodes, with the third season still ongoing. There have also been a number of animated shorts, teasers and "mini-sodes" in between the main episodes.[1] 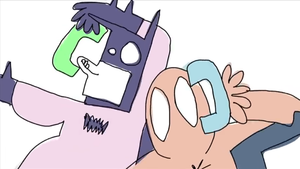 Baman Piderman has a niche but highly engaged fandom who are extremely dedicated to the series and its characters. The show has its own fan-run wiki, as well as a detailed page on TVTropes and a page on KnowYourMeme. Fans have also created a variety of fanworks for the series (see Fanworks, below).

In late 2012, Alex and Lindsay announced that Season 2 of Baman Piderman would be cancelled prematurely as Mondo Media was withdrawing funding for future episodes of the show. Fans clamoured for a continuation of the series, and in 2014, Alex and Lindsay created a Kickstarter campaign to fund the final five episodes of Season 2 and give the show a "satisfying ending".[2] The campaign met its $50,000 goal in less than two days. It then met a further seven stretch goals, including two additional special episodes of the show (on top of the five that had originally been planned), bringing the total raised to $112,722 from more than 2,200 backers.

Of the three, Pumkin/Squib is most popular within the fandom, inspiring a wide range of fanworks featuring the two - an anthropomorphic pumpkin and a green tentacle monster. Fans have embraced the pairing as a canon asexual relationship between two characters of atypical gender and sexuality: Pumkin has been confirmed by the series creators to identify as male, while Squib is agender.[3]

Non-canon ships appear to be less prevalent in the fandom, but a couple of fanfics exist for the pairing Baman/Piderman.[4]

Baman Piderman has spawned a number of fan-made parody videos and homages. Some notable examples include:

Fans have created a wide range of gifs, animations and works of fanart for the Baman Piderman series, published to platforms such as deviantART, Pinterest and Tumblr. In addition, some creators have made fancrafts such as plushies, keyrings and stickers featuring characters from the show.

Fanfiction for Baman Piderman is less prevalent than visual art, but a handful of fanfics have been published to websites such as Fanfiction.net, AO3 and Wattpad.

Baman Piderman's initially simplistic storyline becomes much more layered and complex as the series goes on, and there is a great deal to speculate about in terms of plot, characters and why the strange world of the series is the way it is. Despite this, not a lot of meta exists for the show.

TV Tropes has a WMG (Wild Mass Guessing) page for Baman Piderman containing a number of fan theories, including theories that Baman and Piderman are shape-shifters, that they're benevolent Eldrich Abominations, that they're two children in Halloween costumes or that the show's entire cast is made up of sick children in the same ward of a hospital.[5] Another theory posted to Reddit's r/FanTheories suggests that Baman Piderman is about two children infected by chlorovirus.[6]

A much more in-depth piece of meta by flutterlicious20 lists a number of theories about different elements of the show, including a detailed origin story for the Baman Piderman universe which casts Tuba as the central character.[7]

In his video Gems of the Internet #1, MasterEth theorises that the show takes place in a child's imagination, which explains its surreal and whimsical elements as well as the strange logic. He attributes the fact that the series makes more sense as it goes on to the child growing older and maturing as they create the story.[8]