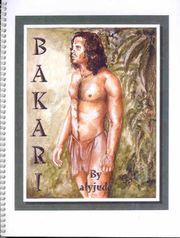 Barkari is a 139-page slash Sentinel novel by Alyjude. Color cover and interior art by K9.

It is online, was published in a print zine in 2000 by Requiem Publications, and as a print zine by Ancient's Gate in 2016.

From the distributor, "An exciting jungle adventure as Bakari meets a man from Cascade Washington - Detective Jim Ellison."

Bast and Hindman, from the zine's forward: "We appreciate each and every one of our authors, and respect their right to have final say in the interpretation of their stories. So, while you peruse this zine, you may notice things that aren't necessarily 'correct' grammar or punctuation. We always let the authors have final say in how they wish to present their stories."

If you originally read Bakari off the 'net, please don't let that stop you from getting this 'zine. "Expanded" is an understatement. Two-thirds of it is brand new for this 'zine. And what a two-thirds it is, too! Damn, but Aly can spin a tale! I was kind of foreseeing that I may not get as much enjoyment from the previously 'net published portion the second time around. I can't be too specific or I'd really spoil it, but if you read the story before, you now know something about Bakari that may make you think it won't be as good on the second reading. But for me, it was even better. Knowing that, um, *thing* created a deeper meaning for me in the interactions between Jim and Bakari. This is a hard 'zine to rec because I can't really say what the new portion is about, as that would probably spoil a very surprising, though wonderful, twist in regards to a commonly held fandom POV towards a canon character. I will say this is a wonderful AU, with our guys very in-character... Though it's AU, as you know if you read Bakari on-line, Jim is still a Cascade PD detective and Blair is essentially Blair, he just took a different route! I was surprised by the amount of angst, too. I normally view Aly's work as more humorous. Not comedic particularly, just, um, lighter... But I just loved Aly's Blair-owies and mental angst in this. I admit I cried and suffered with that tight lump thingy in my throat through half the story! Oh, and the art-work! Beautiful Blair/Bakari in a loin cloth! Those toned abs. Those dark, lickable nipples! That strip of chest hair running across a lean torso and narrowing down... and down to... Well, you get the idea. ;-) [1]

Primal!Jungle!Jim fans unite! *g* I certainly have a weak spot for AU tales set in the jungles of Peru, with a strong, primal Jim in that lovely outfit from "Flight". Or, in Alyjude's case, it's primal!Blair in her fantastic AU. Other great jungle tales are Katrina Bowen's The Jungle Book, Jane Mailander's Jim of the Jungle and Diana William's Tales of the Jungle. [2]