BASCon 2004 was subtitled: "Time for a Little Fourplay"

The 2004 program guide can be found on Fanlore in PDF format (File:2003_Program_guide_small.pdf). 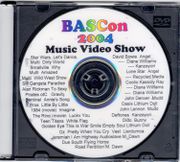 In 2004, Morgan Dawn began curating the Bascon vid show. It was her first time programming for a vid show and she had only a few weeks notice to find submissions and author the show DVDs.

One of the issues circulating around the convention that year were rumors about the level of kink programming. The convention addressed the rumours directly in a post to the convention's Livejournal community:

"To paraphrase Mark Twain, the rumors of our outrageousness have been greatly exaggerated! It has been brought to the concomm's attention *again* that

some people have an erroneous perception of BASCon. While we're flattered that some people think we're so outré, it's hardly the truth. We do NOT have naked Jacuzzi parties at the hotel nor do we have public floggings in the hallways. Really!

The BASCon concomm thinks folks are mixing up BASCon with Friscon. While some of us did volunteer at Friscon, and most of us joyfully attended many years of Friscon, we are not associated with Friscon in any way. We are an entirely different group of people who, *after* it was announced that Friscon was no more, decided to continue the fine tradition of a slash con in the San Francisco Bay Area.

Near the end of Friscon's run, there was a private flogging demo held in an attendee's hotel room, with real live consenting humans who acted as volunteers for the demo. Attendance was by invitation only, so only those who truly wanted to view this activity were present. This display was not public.

The Jacuzzi at Embassy Suites is indoors and brightly lit, right off the hotel atrium, in plain view of anyone walking to the back elevators. Believe us, if there were unclothed shenanigans involving BASCon attendees in the Jacuzzi, the hotel staff would have discussed this with us. This is a family hotel, with lots of children in attendance. We take security seriously and take many precautions to keep mundanes and children shielded from our activities and panel discussions.

The Embassy Suites Hotel in South San Francisco has welcomed our business for the third year in a row. They find us to be an easy event to host - BASCon is a quiet, well-run event for them, and our attendees are well-mannered guests.

In short, even though we do hold the con close to Halloween, we are not the "Scary Con." Please feel free to forward this to any of your friends or listmates or post to your LJ. We've heard these rumors repeatedly and would finally like to put them to rest. If you do hear these rumors, please feel free to contact us, or suggest to the person who is spreading the rumors to contact us directly.

Thanks for your help.