Axel makes his first appearance in the Kingdom Hearts franchise as an antagonist, but later becomes a protagonist and supporting character. Tetsuya Nomura has stated that Axel is based on Reno from Final Fantasy VII but is a different person from him.[1] He was originally meant to die at the end of Roxas's prologue for Kingdom Hearts 2, but his popularity with Square Enix staff caused him to be brought back in later games.

Reno's first appearance in the Kingdom Hearts franchise is in Kingdom Hearts: Chain of Memories, in which he acts as one of the members of Organization XIII attempting to force Naminé to use her powers in order to trap Sora. In this game, he is portrayed as a rather straightforward villain, threatening Naminé and eventually killing Vexen when his plans necessitate it.

His portrayal in Kingdom Hearts: 358/2 Days is quite different; in this game he is a laidback person who acts as a mentor to Roxas and Xion while attempting to protect them from the rest of Organization XIII. It is implied that he may have developed a heart due to extended exposure to two Nobodies connected to Sora. He dies in Kingdom Hearts II in an effort to protect Sora, who he says he cares about because of his connection to Roxas.[2]

Axel's original persona, Lea, appears in Kingdom Hearts: Birth By Sleep, where he is portrayed as a playful kid who is close with his best friend, Isa at the time that they get caught up in Xehanort's experiments with Heartless. Lea reappears in Kingdom Hearts 3D: Dream Drop Distance, where he gains a Keyblade and displays willingness to fight by Sora's side along with some frustration at repeatedly being called Axel. He acts similarly throughout Kingdom Hearts III and is notably overjoyed when he is finally reunited with both Roxas and Xion.[3] 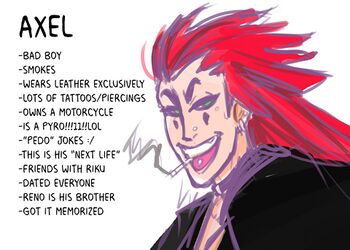